Revenge of the Nerd 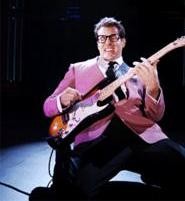 Once spectacles are perched on your nose, you become a nonentity, fair game for scorn and ridicule. So it's hard to believe that one of the most respected rock stars of all time was a scrawny kid sporting heavy horn-rimmed glasses, the ultimate nerd fashion accessory. Almost comical in appearance, but possessing a fierce commitment to his distinctive sound, Buddy Holly was a primal force on the rock-and-roll scene of the late 1950s.

The Buddy Holly Story, now unfolding at Akron's Carousel Dinner Theatre, manages to harness some of the magic of this musical pathfinder. Director Victoria Bussert coaxes small but telling moments from the flimsy book written by Alan Janes and Rob Bettinson, crafting a Holly who is entirely sympathetic without being a tragedy waiting to happen.

For those wondering whether Holly truly was a leader in rock music, note that Paul McCartney once admitted that at least 40 of the Beatles' own songs were influenced by him. And Elton John started wearing glasses just so he could look like his nearsighted idol. Using deceptively simple chord progressions, Holly created irresistible tunes such as "That'll Be the Day," which propelled him and his two sidemen, the Crickets, to overnight national fame.

The dialogue scenes in the first act are shallowly written and formulaic, as Buddy struggles free of his connections in Lubbock, Texas, and tries to make a name for himself. As the local DJ and putative narrator Hipockets Duncan, excellent actor Marc Moritz settles for predictable line readings and a thin drawl, instead of submerging himself in a riskier interpretation of this hick pseudo-celebrity. Similarly, Todd Faulkner, as supportive record producer Norman Petty, doesn't drive for anything deeper, which could have set up the ultimate rift between him and Buddy.

The best decision the authors made was to end each act with a concert set, allowing Holly's music a place of distinction. Act One concludes with the appearance of Buddy Holly and the Crickets at the Apollo Theater in Harlem, where the all-black management and audience expected a black group. Their appearance begins in stunned silence, but ends with raucous delight, as McRoberts and his duo (Tobia D'Amore and John Rochette) actually play and sing the memorable songs.

Their rendition of "Not Fade Away" is particularly kickass. This is rock with some hair on it, and it shows why the Rolling Stones got their first hit in the U.S. by covering that very tune. "Peggy Sue" is equally excellent, with McRoberts coming close to Holly's signature falsetto riffs. (The group's performance is spotty on "Words of Love," however.)

In the second act, the now-famous Buddy falls head-over-pickguard for a receptionist at his new producer's office and proposes marriage five hours later. In retrospect, it's almost as if he knew how little time he had and was intent on draining all the joy he could out of his two and a half years in the spotlight. McRoberts' scene with his wife, Maria Elena (Becca Lopez), singing "True Love Ways" to her on the sofa, is a lovely and genuine interlude as Buddy tries to calm her fears about his doomed tour.

As almost everyone knows, the "Winter Dance Party" cavalcade ended one snowy night in Iowa, known forever as "The day the music died," thanks to the epic ditty "American Pie." The plane crash that killed Holly and his traveling co-stars, Ritchie Valens and the Big Bopper, is cleverly integrated into the extended concert sequence that concludes this show. Beefy Ryan Dunkin handles the Bopper's "Chantilly Lace" with irresistible flair, and Michael Busillo as Valens is a package of taut and dangerous testosterone as he leaps and twitches through "La Bamba," bringing down the house in the process.

But it is McRoberts, repeatedly skidding on his knees, guitar held high as Buddy always held it, who brings this production home and captures the full impact of Holly's music. For those old enough to remember, it's a great memory trip. And for younger folk, it's a journey to the roots of rock.