On the American Fleadh tour, Black 47 takes Celtic wildness for a ride. 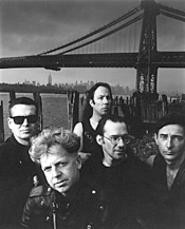 Larry Kirwan has a way of making you feel your inner Celt, even if you don't owe a single strand of your DNA to the inhabitants of the Emerald Isle. "There's magic at the root of the Irish soul," says the leader of Black 47, the New York band that may be the richest acquired taste in American rock of the past 15 years. "Mix that magic with the Irish love of company, a good time, and some booze, and you have an explosive commodity. Bottle it, and you have an explosive live event." You'd be forgiven for picturing a man slyly rubbing his palms together: Like the characters in his songs, Kirwan is as much a schemer as a dreamer.

The event about which he raves is the first American Fleadh -- not the only attempt to take the Irish cultural festival on the road, but compared to the Guinness-sponsored events of the mid-'90s, certainly the truest to the form's grassroots tradition. "Black 47 has been playing a series of huge Irish festivals across the U.S. for the last decade," Kirwan explains. "The Milwaukee Irish Fest has over 100,000 visitors over a three-day festival; Dublin, Ohio, does 70,000 in their weekend. Yet these festivals pass under the radar screen of the general public and the media. I wanted to have a traveling version of one of these festivals."

These regional fleadhs (pronounced flahs; gaelic for "festivals") typically feature live poetry, storytellers, rock bands, trad bands, drummers ranging from masters of the familiar bodhran to percussive connoisseurs of the cow's rib cage, whistlers, dancers, dancers, dancers, and beer. "Many Irish Americans think that this is a formula for a stereotype and tend to shy away from such events," says Kirwan. "But to me, Irish music is an exploration of our Celtic roots. Those roots and the music that they inspire can be a bit frightening and perhaps too liberating for some, but Irish music brings out that inherent Celtic wildness that is our heritage."

If the acts lined up for this year's 10-city American Fleadh tour aren't all unbridled musical shamans, they certainly promise fun and eclecticism to go with the expected dance troupes. Long before the late-'80s radio hits for which we Yanks know them, Hothouse Flowers honed their Celtic soul as street entertainers in their native land; singer Liam O'Maonlai remains the kind of fluid belter who could stall foot traffic. Bronx native Eileen Ivers, on the other hand, hails from the conservatory, rather than the alleyway. The musical star of Riverdance, she's been called "the future of the Celtic fiddle" by The Washington Post. And back across the Atlantic, the forthright folk-rock and controversial lust-at-mass anthems of County Galway's Saw Doctors have made them charting rock stars. "We're here to make a bit of a racket for an hour or so and let people try and think about lost love, infatuation, football, lounge-bar acts, farming, lust, and the like," Saw Doctors singer Davey Carton says of his band's American Fleadh appearance.

But if there's one act on the bill that promises a scenic ride -- not to mention primal, pre-Christian mayhem -- it's Kirwan's Black 47. George Bernard Shaw, champion curmudgeon, once wrote, "I showed my appreciation of my native land in the usual Irish way, by getting out of it as soon as I possibly could." Ascribe a similar, if perhaps less grudging, sentiment to the thousands of Irish immigrants who crowded America's docks in the 1800s, only to retain a cultural identity of such deep colors that much of American culture was repainted by its touch.

If there's any subject Kirwan knows well, it's the complex "appreciation" to which Shaw refers. He left dreary Wexford ("lots of light and lots of gloom," he says) for New York City in the mid-'70s in search of punk-rock dreams. His work as a songwriter, playwright, and author has always been dominated by Irish themes -- so much so that, while no critic so far has mistaken his new novel, Liverpool Fantasy (an alternate history of the Beatles), for an homage to Them, his 1994 song "Paul Robeson (Born to Be Free)" was written up by one confused scribe as a paean to some Irish national figure.

Black 47's music, however, is borderless: Breezy Celtic pipes, punky guitars, booming New Orleans brass, and hip-hop-influenced beats bleed into each other so sweetly as to argue for the melting-pot theory of American culture against the multi-culti "tossed salad," if only on artistic grounds. And Kirwan's songs span a swath of subjects and emotions as broad as his band's musical palette. There are conventional protest ballads, such as "Bobby Sands M.P." (about the Belfast IRA activist who died in prison), from 1996's Green Suede Shoes, with Kirwan's near-spoken delivery packing enough breathless heft to sink the stomach of a non-English speaker. He's even got hard-luck immigrant tunes that manage to be screwy rather than sorrowful, where his reedy voice gets so tight, it threatens to snap on giddy lines such as "When the Bank of Ireland gave me the boot/They said, "Don't let the door hit your arse on the way out."

According to true-believer Kirwan, "Rock music is a great medium for anything that's unsettled, be it politics, emotional trauma, displacement, or immigration -- rock music can handle just about any subject. It's just the paucity of imagination of musicians that tends to leave it in its 'doh' ghetto," he says, doing his best Homer Simpson impression.

Kirwan's disdain for boundaries is nowhere more evident than in Black 47's major innovation: Jam Master Jay-meets-Chieftains rave-ups. On tracks such as "Rockin' the Bronx," from Black 47's 1993 debut, he declaims -- or should we say represents -- with the pride of a man who couldn't give two shits what the self-appointed culture police might think.

Thursday at Tower City Amphitheater, when those Uillean pipes sail over a concrete-cracking beatbox and a column of dancers hits the stage to that thunder, don't be surprised if some irresistible jig comes up from your bones and takes over . . . no matter where you come from.