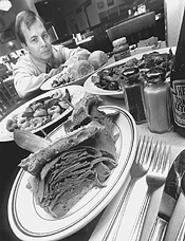 Eddie Sand's Blueline Café is at its best at breakfast, over sturdy white mugs of steaming coffee, some thick French toast, or a scramble of eggs.

That's when guests at this old-fashioned diner can sink their teeth into freshly baked muffins heavy with juicy blueberries or savor a gooey pecan roll smothered in nuts. Cheerful servers keep plenty of hot coffee a-coming near the southeastern terminus of the RTA's Blue Line Rapid, while bleary-eyed breakfast eaters stoke up on the caffeine and carbohydrates that will help them face another day. And although the restaurant is as popular for its convincingly retro atmosphere as for its food, the usual jukebox tunes, like "Deadman's Curve" and "Sea of Love," take a temporary backseat to the soothing strains of classical music during the breakfast hour.

When owner Steve Goldberg bought the business in 1991, Eddie had long since retired to Florida, and the space housed a struggling deli. Goldberg gradually converted the deli to a full-service restaurant with a broad menu and introduced the colors, shapes, and textures of the 1930s, '40s, and '50s into the lively interior. Today, nostalgic details include vintage advertising posters, period light fixtures, a gorgeous neon-rimmed wall clock, and linoleum-style flooring. Deeply saturated shades of cobalt blue, maroon, and black find their way onto the vinyl upholstery of the overstuffed booths and banquettes, as well as onto the glazed tiles along the base of the tidy wooden bar. And while the bar itself, with its sleek wall sconces and highly polished surfaces, has a vaguely "moderne" flair, the turquoise-colored fins that line the edges of the recessed ceiling are pure and simple 1950s kitsch.

Those lucky souls whose appetites awaken at approximately the same time as their bodies can dive into a huge platter of Sand's Corned Beef Hash, made with a perfectly balanced blend of finely ground, lean corned beef and shreds of tender potato. While we've had zippier versions, this mild-flavored hash brightened up nicely when doused with the de rigueur dollop of ketchup from the bottle that dwelled in the middle of our black-and-white Formica tabletop. Two slices of toast and a soft-poached egg put the finishing touches on this timeless diner breakfast.

Other cafe standards include a variety of omelets, pancakes, and waffles. Four thick triangles of dense challah bread, dipped in a mixture of milk and beaten egg, fried until its edges were crisp and golden, and served with a cup of warm maple-flavored syrup, made a nice variation on the theme of French toast. (Next time, we'll also try the "weekends only" version that coats the bread in crunchy granola before slapping it onto the griddle.) Two slices of lean fried bacon, on the side, were thoroughly cooked and crisp.

However, we probably wouldn't place a repeat order for a weekend-only platter of Eggs Benedict — two poached eggs over Canadian bacon slices on toasted English muffin halves, draped with a thick Hollandaise sauce. The tough smoked meat and the sour, gluey Hollandaise made this something less than the champion of breakfasts.

A better choice was a platter of short, fat blintzes. We enjoyed both the moist blueberry blintzes and the somewhat drier farmer's cheese-filled versions, wrapped in thin, golden crêpes and sided with sour cream and blueberry sauce.

Breakfast, lunch, or dinner, the restaurant offers plenty of choices for diners whose personal food pyramids balance on a base of fat, salt, and sugar. However, Goldberg includes a number of healthful alternatives, like omelets made with egg whites and French toast made with egg substitute. Fat-free muffins, bagels, fresh fruits, oatmeal, and a variety of dry cereals served with skim milk are also available for the virtuous.

Likewise, while the lunch and dinner menus don't skimp on treats like hot brisket and gravy over mashed potatoes and thick corned beef sandwiches, lighter, more contemporary offerings, like tarragon chicken salad and bow-tie pasta with sun-dried tomatoes, also put in an appearance. Plans call for even more healthy and vegetarian choices to join the menu in the near future.

A crisp and buttery grilled challah sandwich — stuffed with alfalfa sprouts, sliced carrots, steamed broccoli, and grilled mushrooms, peppers, and onions, and topped with Muenster cheese and a dab of perky honey mustard — was our lunchtime favorite, combining as it does both the healthful and the delicious.

However, that old cure for what ails ye — matzo-ball soup — was less successful on both of the occasions we sampled it, with a disappointingly dull and watery broth. And while the dense little matzo balls were firm and fresh tasting, we didn't enjoy the pieces of gritty eggshell we found embedded in one of them during a dinner visit.

In fact, that dinner visit was the least impressive of our three trips, due at least partially to our clueless server. Despite the light weeknight crowd, he neglected to bring flatware, allowed dirty dishes to pile up around us, and decided to substitute an oatmeal-raisin cookie for the required chocolate-chip cookie in a gooey, ice-cream-and-hot-fudge-loaded Cookie Monster dessert. (He was lucky in this instance that the young diner in question possesses a major-league sweet tooth that allows her to eat anything — anything! — as long as it's coated with hot fudge sauce. Not all diners, and especially young ones, are so accommodating, and they should certainly be consulted before substitutions are made on their behalf.)

In contrast to the crunchy matzo-ball soup, we enjoyed a big cup of the cafe's signature Garden Vegetable Chowder, a creamy vegetarian combination of zucchini, tomato, carrot, onion, and corn thickened with sharp Cheddar cheese. The hearty chowder was colorful and tasty.

An order of Reuben Skins — four massive baked potato halves partially hollowed out and then loaded with mild sauerkraut, cubes of tender corned beef, and a sprinkling of melted Swiss cheese — was both unusual and tasty, especially as the various savory flavors blended together during the course of the meal. A plastic cup of zesty Thousand Island dressing provided the finishing touch.

We had trouble deciding between three classic "blue plate" specials, including turkey on white bread with gravy (the "Suburban"), beef brisket on white bread with gravy (the "Downtowner"), or meatloaf with mashed potatoes and gravy (the unimaginatively named "Meatloaf"; perhaps "Urban Sprawl" didn't appeal?). We settled on the Downtowner, a hefty plate of thin-sliced, reasonably lean and tender beef on the promised soft-and-sweet white bread, sided by honest mashed potatoes and a little cup of perky cranberry-orange relish. The accompanying ear of fresh sweet corn was a delightfully seasonal notion; however, by the time it reached our plates, it had suffered the fate of all institutional corn-on-the-cob: It was starchy and past its peak.

And now for a brief glimpse into the mind of a food critic: I once knew a man who would eat nothing in restaurants other than steak. His obsession even extended to ethnic establishments where, while the rest of his party feasted on egg rolls and Moo Goo Gai Pan, he demanded a porterhouse or sirloin. Needless to say, he ate a lot of very bad steaks and had more than one bout with tummy troubles. But out of respect for him and his soul mates (and I know you are out there), I sometimes like to sample the grilled beef in places not particularly known for their way with steak. Thus it was that we ordered Eddie's twelve-ounce T-bone, a thin but flavorful cut that was a bit chewy on the strip-steak side and quite tender on the filet side of the bone. You relentless carnivores out there, be advised: You could do much worse than to order this steak. A plump, well-baked potato and another sorry ear of corn accompanied the meat.

Dessert choices are abundant at Eddie's and include a variety of cakes, pies, and ice cream treats. A slice of icy-cold, overly sweetened blueberry pie, in a soggy crust, was disappointing, but a large chocolate milk shake, served in its aluminum blender can, was fresh, cold, and creamy.

And then there was the aforementioned Cookie Monster, described on the menu as a huge chocolate-chip cookie topped with hot fudge sauce, vanilla ice cream, whipped cream, and a face made out of candy. While the server's unauthorized substitution of an oatmeal-raisin cookie for the chocolate-chip cookie ("We were out of chocolate chips," he shrugged after we asked him what prompted the switch) wasn't a disaster for our young fudge lover, we didn't know whether to laugh or cry when we saw that he had shaped the monster's face, not out of candy, but out of bits of unpeeled, desiccated oranges and limes! It's times like these that test a diner's mettle, but luckily my daughter was in a magnanimous mood and simply scraped away the citrus peels and got on with the business at hand.

While Eddie Sand's certainly has more of the blue plate than of the blue blood about it, it's a pleasant family destination for inexpensive eats in an upbeat atmosphere. And if you leave humming a few notes from "Heartbreak Hotel" or wondering where your old poodle skirt went, why just consider it a souvenir from another time and another place, where the milk shakes were always thick, the bread was always bouncy, and life's biggest disappointment was nothing more than finding fruit on your hot fudge sundae.