by Matt Leavitt and Cris Glaser 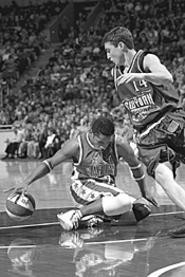 t's a pretty safe bet that the New York Nationals will lose when they take on the Harlem Globetrotters at Gund Arena on Thursday. After all, the court jesters are celebrating their 80th anniversary next year. That's a lot of time to perfect those behind-the-back passes and bucket tosses. Their current tour stops in more than 40 countries over the next year. And according to Globetrotter Otis Key, the land of King James is one stop the team is looking forward to. "Cleveland is one of the hottest cities for basketball right now," he says. "We really want to make it special." So expect to see plenty of high-flying slam dunks and miraculous half-court shots. "We have a good nucleus of guys on this team that have played basketball at the college and professional level," says Key. "Timing and spacing are everything to us." The 'Trotters and Nationals tip-off at 7 p.m. at Gund Arena, 100 Gateway Plaza downtown. Tickets range from $13 to $50, and are available by calling 216-241-5555. -- Matt Leavitt

Back in the day, the Elysium Skating Club was the group in town for figure-eighters. At the old Elysium rink at University Circle, men in jackets would glide on the ice with their white-gloved partners to the strains of a full-scale orchestra. If you could spare a nickel, a young boy would lace up your skates for you. Nearly 50 years later, the child labor and dress code are both gone. But the skating style is the same: Soloists, pairs, and trios skate to carnival-style organ music. It's not for novices, says club president Peter Pesch. "If they can't get around by themselves or skate to a beat, they won't have much fun. But if they truly enjoy skating and practice at other sessions, they can learn." The club meets from 10 a.m. to 12:15 p.m. Sunday at the Cleveland Heights Recreation Pavilion (on Mayfield Road and Superior Avenue). Fee is $5; call 216-691-7373. -- Cris Glaser

Sherri Homolya couldn't keep her eyes focused when she played Xtreme Bowling for the first time last year. "When the lights went down and the music came on, it sorta knocked me out of my shoes," she says. Every Friday night, Homolya, her sister, and two cousins take turns at rolling glow-in-the-dark balls at illuminated pins underneath a swirl of laser lights shooting down on the lanes. "Welcome to 21st-century bowling," says Homolya. "It's kind of like throwing gutter balls at a Pink Floyd concert." It happens from 10:30 p.m. to 1 a.m. Friday at AMF Carousel Lanes, 3545 Ridge Road. Fee is $13; call 216-281-3589. -- Cris Glaser