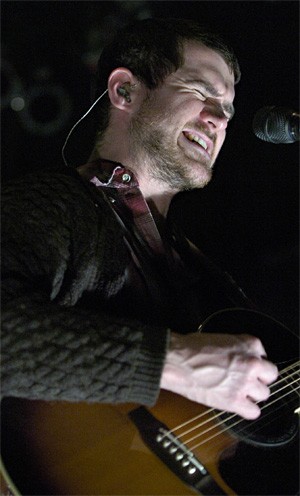 "I was told 30 seconds before the news hit [online "metal CNN"] Blabbermouth that I was let go — two weeks before Christmas," says Owens. "I don't think it was handled right. It's a shame it ended like that. With Judas Priest, at least the way it was handled, I'm still good friends with the band. The good thing is, I don't have to discuss Iced Earth anymore. I can move on. I wish them luck. We're ready to go to the future."

Owens joined the band in 2003, becoming its fifth singer. As a hired-gun frontman, he delivered the lyrics of mainman-guitarist Jon Schaffer. The new Framing Armageddon didn't receive bad reviews, but didn't match the glowing notices of 2004's The Glorious Burden.

The Akron-based singer's new top priority is Beyond Fear, a locally based power-speed hybrid. That band's 2006 self-titled debut received some of the best reviews of Owens' storied career. The frontman says a second record is nearly written, and local fans can expect some live shows soon.

Owens is still being managed by Wendy Dio, wife of metal-legend Ronnie James Dio. Beyond Fear remains attached to international metalworks SPV Records. The singer may move forward with a new Winters Bane album and tour, if the project generates label interest; Bane bassist Dennis Hayes was dismissed from Iced Earth along with Owens.

"I've already had a lot of offers," says Owens, who is now regarded as one of metal's top voices. "It's nice to get the support."

• Jessica Lea Mayfield, the singer-songwriter phenom formerly known as Chittlin', will open the Black Keys' Christmas show on Saturday, December 22, at Akron's Civic Theatre (182 South Main Street). Keys frontman Dan Auerbach, who is producing her upcoming album, will join her for part of the set. She'll return the favor on the Keys' new disc by singing on a track. Both records are due in the spring.

• While in town with Babyface's band, singer-songwriter Rob Lewis stopped at Cleveland's Lava Room Recording to cut a track for the upcoming soundtrack of the movie First Sunday. Lewis has collaborated with Fall Out Boy and Christina Aguilera. He found the studio via the internet while searching for a room with an SSL mixing console.

• After 320 shows over four years, Colin Dussault's Blues Project plays its final show as the Main Street Café's (17 Public Square, Medina) house band on Friday, December 28. "It's the end of an era," says Dussault. "We are going to enjoy some downtime, recharge our batteries, rehearse some new material, and watch American Idol."

• On Saturday, December 29, House of Blues (308 Euclid Avenue) will host a tribute to Mitch Karczewski, the recently deceased head of Spotlight Talent, the booking agency and management firm that did more than its share to keep metal alive locally during the '90s. The Classic Metal Show's Chris Aiken will host. Acts include a Lipstick reunion, Level-C, Terry Lee Goffee, Sugar, Jackie, the Billy Morris Band, and others. Read more at blogs.clevescene.com. Visit Scene's C-Notes blog daily for breaking entertainment news you can use.