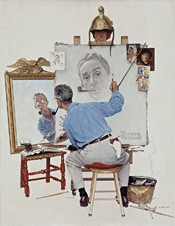 It isn't easy to condense an artist's entire career into one exhibit. Take Norman Rockwell: The famed illustrator and father of 20th-century Americana produced more than 4,000 works in his nearly six-decade career at The Saturday Evening Post and Look magazine. But in today's opening of American Chronicles: The Art of Norman Rockwell, at the Akron Art Museum, the collection of 29 oil paintings and more than 320 magazine covers manages to capture the artist's signature style. The exhibit was pieced together by the Norman Rockwell Museum in Massachusetts, the permanent home of these works, some of which show Rockwell attempting to chronicle controversial issues of his day. Among the pieces is a 1943 cover of Rosie the Riveter, in which Rockwell pays tribute to millions of women who worked in the manufacturing industry during World War II. The Problem We All Live With, a 1960 painting that depicts the struggle to desegregate public schools, is also on display. "Rockwell was able to express what it means to be an American with a directness and vitality that no other artist in our history has ever matched," says Akron Art Museum curator Barbara Tannenbaum. The collection is on display from 11 a.m. to 5 p.m. Tuesdays, Wednesdays, and Fridays through Sundays, and 11 a.m. to 9 p.m. Thursdays through Sunday, February 3 at the Akron Art Museum, 1 South High Street in Akron. Admission is $3. Call 330-376-9185 or visit www.akronartmuseum.org
Tuesdays, Wednesdays, Fridays-Sundays, 11 a.m.-5 p.m.; Thursdays, 11 a.m.-9 p.m. Starts: Nov. 10. Continues through Feb. 3, 2007