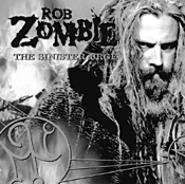 "Music is becoming so personal. It's embarrassing. It's like listening in on someone's therapy," Rob Zombie gripes in the latest issue of Spin. These words ring especially true when it comes to heavy metal, Zombie's demonic domain, which has taken a dramatic turn toward ham-fisted introspection in recent years that's damn near antithetical to the original intent of the form. In its earliest incarnation, metal was little more than a comic book fed through a Marshall stack. It was amped escapism, with its leading figures patterning themselves after superheroes and deities. Gene Simmons was the "God of Thunder," Rob Halford was a "Metal God," and for his part, Dio wore a cape. Now metal wants to be taken seriously. Fine. Screw the hobbits. But can a genre that was born of fantasy go all straight-faced without losing some part of itself?

On his sophomore effort, Rob Zombie weighs in with a decided "no." That's why The Sinister Urge is a laundry list of mythical menace, from demons to dead girls. It's delivered with all the ingenuity of Friday the 13th, Part VI. Hearing Zombie grunt out devilish double-talk, like Satan straining to unconstipate himself, over pneumatic guitars is as expected as Jason's requisite slaying of the B-movie blonde with the breast size that bests her IQ. Thus, the few new elements worked into the fold on The Sinister Urge -- "Go to California" boasts horns and turntables, "Never Gonna Stop" is abetted by helium-huffing, Perry Farrellesque vocals, "Ironhead" contains an ill-advised foray into rap -- are all as token as the dialogue of the hacked-up hottie. There's no whining, no consoling, and definitely no therapy; just proof plenty that Zombie could use a bit of the latter.