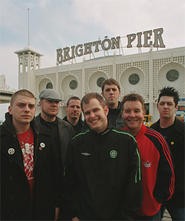 Think a dance club can't bring the rock? Think again. Touch's rock night has become one of the near West Side's signature nights. Dozen Dead Roses singer Brandon Zano and 3 Penny Pussy frontman Rob Bell work the bar, while DJ Booya spins the tunes. Grab a cheap shot of Beam, chase it with an equally cheap PBR, kick back, and enjoy some loudness. Booya spins everything from Helmet to the Dropkick Murphys, for a crowd that's dense with musicians, bartenders, and waitresses. They have to work on the weekend, so for them -- and you -- every Thursday is an early Friday.