Rock of (All) Ages

The kids are alright -- and so's everyone else -- at a new Cleveland concert club. 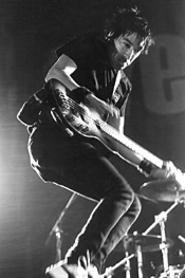 Underage concertgoers always get the shaft at rock clubs, which is what makes the Shelter such a promising alternative.

Beginning in early May, the new nightspot on the Cleveland-Old Brooklyn border will host concerts in a booze-free, all-ages environment, with no extra charge for those under 21 and no shows that will stretch past midnight -- a welcome change from the curfew-busting schedules kept by other area clubs.

The Shelter is the concept of Doug Kirschner, a local music promoter whose credits include the popular Saturday-afternoon battles of the bands at the Revolution and Rhythm Room. By next month, those battles will be waged at the Shelter.

The focus of the 300-capacity club (roughly the size of the Grog Shop) will be on local bands of all types -- from punk to metal to jazz -- but national acts will also be featured. "Primarily, we're going to be a rock club, but we're not going to be doing just music," says Kirschner, who plans to host everything from skateboard demos to open-mic poetry and dance nights. "We're not going to be doing a lot of kiddie bands." (Among the Shelter's first shows will be Victory Records' Somehow Hollow on May 17, Chicago metalcore favorites Dead to Fall on May 20, and New Jersey punks Bigwig on May 24.)

Kirschner admits there are risks to running a club devoid of grain-based beverages. "In the beginning, I wasn't too concerned, but I have been getting some feedback," he says. "But if we have Mustard Plug one night, then King's X the next, I don't foresee people not showing up just because there's no bar."

The Shelter is in the Memphis-Fulton Plaza; locals interested in playing the club can contact Kirschner at P.O. Box 30175, Cleveland, OH 44130.

Fresh from making the rounds with Sleater-Kinney, Akron blues duo the Black Keys have landed the opening slot on the upcoming Beck tour, which kicks off May 28 in Virginia and hits Tower City Amphitheater on June 6. Mark Mauer, publicist for Fat Possum Records, the Black Keys' label, reports that close to 15,000 copies of the band's April release, Thickfreakness, have already been shipped. Expect the Beck tour to help break the album. The downside: Emo wuss Dashboard Confessional is also on the bill.

Cleveland industrial favorite State of Being has added a new member, drummer Randy Blaire, formerly of local goth-rockers Queue Up, as well as Chicago's URN and Morphine Angel. Blaire will make his live debut with the band this Wednesday at the Symposium.

Broadjam Inc., a company that provides web tools for online music publishers, is holding a competition for independent musicians seeking record deals. The contracts, offered by ASS-9 Records and Black Dog Promotions, include a grand prize of a $5,000 development deal, national radio promotion, and distribution through FYE record stores. Artists can register before July 14 at www.broadjam.com.