A Brunswick teen discovers the healing power of punk rock. 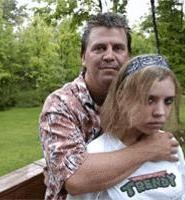 Kalie Kaminski first made the papers 15 years ago. She was an infant at the time, but she was already famous. Only a couple weeks old, she was the youngest recipient of a heart transplant in Ohio history.

When Kalie was born, the left side of her heart was malformed, due to a disease known as hypoplastic left heart syndrome. Without surgery, newborns with the condition usually die within their first month.

Kalie was two weeks old when doctors discovered that she had the disease. Her parents, Kim and Mark Kaminski, chose transplant over the alternative -- a series of surgeries without any guarantees.

The Kaminskis waited 12 days before a donor was found. Dr. Michael Spector flew to Tallahassee, Florida, to harvest the donated heart, and the next day Kalie went into surgery at Rainbow Babies & Children's Hospital. She was the hospital's first infant transplant patient.

The surgery was successful, and Kalie grew up, to all outward appearances a normal, healthy child. The blond, ruddy-cheeked Brunswick teen is shy -- but bring up the subject of music, and her eyes sparkle.

Her first love was Simple Plan, after she heard the Canadian pop-punk group in the movie The New Guy. Then it was on to the band's close friends in Good Charlotte, and from there she truly became obsessed. She not only subscribed to Alternative Press, but bought back issues. She consumed music.

One time, outside a Good Charlotte/Simple Plan show, she was handed a disc by Trendy, a local punk band. She went home and listened to it and fell in love again.

Most of the people Kalie knew didn't listen to the music she liked. It was her thing. She even began to teach herself guitar.

Then Kalie found herself facing a second health crisis: Her anti-rejection drugs had caused kidney damage. She would need a transplant. "It was devastating," her father says.

Her mother, Kim, was the logical choice for donor, but just before scheduling surgery, doctors discovered a twisted blood vessel around Kim's kidneys, making the transplant too dangerous.

For a while, the doctors considered Kalie's father, Mark, a poor choice for a donor, because he was taking medication to regulate his blood pressure. But after much discussion, family and doctors decided that if he watched his diet, he could take the risk.

The surgery was scheduled for the first week of March, right after a Hawthorne Heights show that Kalie had tickets for. "She was going to go to that show, even if it had to be in a wheelchair," Kim says.

Kalie not only attended the concert, but went backstage, where she met the band. They wished her the best.

The transplant worked. Having endured nine months of a diet that precluded meat, dairy, potassium, and salt, Kalie's first post-op meal was a cheeseburger, with ice cream for dessert.

As a special treat, Kalie's parents took her to the Warped Tour when it came to Cleveland earlier this month.

"I have to give her these shots every day, and she's just a trooper," Kim says. "I feel so bad, it's nice having things like Warped Tour to reward her."

Kalie is still wearing the pink VIP bracelet from Warped Tour. "She'll be wearing it for a while," her mom says. She's also getting guitar lessons this fall, when she'll be a freshman at Brunswick High. Asked what she might want to do after college, Kalie is uncharacteristically outspoken.

"I don't want to go to college," she says determinedly. "I want to be an actress or an artist, maybe."

At this point, who's to stop her?