Slaves on Dope takes another shot at Mushroomhead. 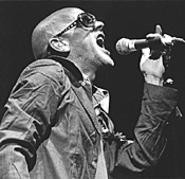 "It seems that Slaves On Dope are worthy enough to get a mention from the all-mighty Mushroomhead, a band who chooses to hide behind masks and makeup," SOD bassist Frank Salvaggio said in an e-mail to Scene that was also posted on the metal website Blabbermouth.net. "That mode of stage apparel was made popular in recent years by our friends in Mudvayne and Slipknot . . . It's quite ironic that they keep 'borrowing' great ideas and are now taking credit for them, over and over again."

The clash began early last month on Blabbermouth, when SOD frontman Kevin Jardine accused Mushroomhead of stealing their idea to cover Seal's 1992 adult-contemporary hit "Crazy." Then, 'Head drummer Skinny laughed off Jardine's allegations in this column two weeks ago. Now, the Canuck hellions have issued a retort to the retort.

"The masked band must also be telepathic," Salvaggio continued, "because Slaves On Dope met with producer Matt Wallace and Mushroomhead's current management team regarding the usage of Seal's song long before the Men With Masks decided to cover it. Make no mistake, many bands have covered Seal's 'Crazy,' but not under these similar, and quite frankly, exact circumstances -- it's just too coincidental. F.Y.I., February 5 will mark the 11th year of Slaves on Dopes' existence. Keep it real, boys! And by the way . . . love the masks and makeup!"

Slaves on Dope headline the Odeon this Friday, October 3.

· Kent instrumentalists the Six Parts Seven are readying their latest Lost Notes From Forgotten Songs, a nine-track release comprising old tracks that have been radically remixed by such alt-rock big dogs as Modest Mouse's Isaac Brock and Pedro the Lion's David Bazan. Due November 11, the album will be released by Seattle's Suicide Squeeze Records, which has issued records from Pedro, MM, and singer-songwriter Elliott Smith. Six Parts Seven was also recently featured on NPR's All Songs Considered.

· Akron's Lime Spider will host a CD-release party for the new diverseCity compilation Saturday, October 4. The 22-song disc is the inaugural project of Ohio Music Review, a soon-to-launch fanzine and musicians' resource. The compilation features 13 Ohio bands, most of them from the Akron-Cleveland area. The lineup includes modern-rockers Community 5, the stirring acoustic-rock outfit Manila Drive, and reggae-based sensation B.E. Mann. Most of the disc's artists will perform at the low-dough show. Admission is a mere dollar, and that buck includes a free copy of the disc.

· Reports of the demise of Lorain's Flying Machine weren't exaggerated, but they've since become obsolete. The metal pit's owner, Mitch Karczewksi, said that once he announced plans to close the 100-year-old building, local bands had his phone ringing off the hook, causing him to reconsider. Karczewksi, who also heads Cleveland's Spotlight Talent, says that a very brief dip in the cold pond of independent promotion made him realize that it's good to be king. Especially when you get to hang with Manowar.