Matt Pike and High on Fire take stoner metal into the mainstream. 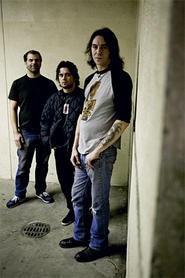 You couldn't possibly dream up a guy like Matt Pike. Not only is he the gnarliest dude on the planet; he has a hellacious band to match -- High on Fire.

Over the last 20 years, many of them spent on the road, Pike has evolved from a long-haired teen into a burly shouter and axeman, whose reputation and image seemingly loom larger than the metal gods he grew up worshiping. Pike's ever-growing fan base generally considers the guy some kind of Promethean man-beast who roams musical netherworlds, dispatching razor-sharp riffs while wailing about dragons and cyclopes, and drinking kegs like a thirsty raider just back from a slaughter.

That last bit, mind you, is no myth.

"I'm sorry if I sound retarded, dude," says the hungover raider, calling from his band's tour van, en route from Wyoming to Montana. "I got really wasted last night. I don't even remember what I did after the show. I must have been running around wasted."

Pike is a true child of the '80s underground, coming of age during the golden era of thrash metal and hardcore punk, when he witnessed bands like Metallica and Black Flag tear up small clubs in the Bay Area. Pike actually learned to play guitar by dropping acid and practicing Slayer's screaming, single-note solos.

Asbestos Death, his first band, eventually morphed into the mighty Sleep, a deafening stoner-metal trio from the '90s. According to legend, the band received a six-figure advance from London Records in 1995, but burned it on weed, Orange equipment, and the making of Jerusalem (aka Dopesmoker), an album that consists of one hour-long song that sounds like Black Sabbath on black tar. Pressure from an extremely dissatisfied record company delayed the disc's release for three years, dismantling Sleep in the process.

Death Is This Communion, High on Fire's new album for Relapse, pushes metal in exciting new directions. Instead of farting around with rap or technical wankery, High on Fire is dragging metal into the future by actually returning to the music's primal sludge (i.e., Black Sabbath) and resequencing its initial genome.

Stoner metal now stands in direct opposition to metalcore, the refined version of the metal-hardcore hybrid that has turned the Headbanger's Ball into a two-hour commercial for career opportunists. After having Saint Vitus, the Melvins, and Kyuss lay down its foundation, stoner metal is finally coming into its own. Bands like High on Fire and Mastodon are sparking Sabbath's primordial ooze to life, adding the grime of old-school COC and the epic technical jams of Metallica. Like Master of Puppets once did, Death Is This Communion raises the bar for its genre.

"Fury Whip," the six-minute gut-grinder that opens the disc, sounds like Motörhead covering Slayer's "Seasons in the Abyss." Riding a rhythm that's as thunderous as a pack of wraiths on horseback, Pike shouts "Death tax/Broken backs/Time has come to wield the ax."

Capturing all this whoop-ass in a jug ain't easy. Instead of spending money on an extended trip to Chicago to work with Albini again, HoF worked with another Nirvana producer: Seattle's Jack Endino, who volunteered his services. As a child of the '70s, Endino's metal ideals are Sabbath and Motörhead -- perfectly in line with Pike's aesthetic.

"It struck me that I really needed to be recording this band," explains Endino from his Seattle home. "This is a noisy band. There's a lot of distortion going on. It's dark. It's heavy. It's loud. And there's a lot of double kick drum. It's an engineering challenge to keep the low end from running away so it comes out of the speakers [with] a nice, powerful shape that whacks you in the chest."

Endino confirms that Pike's shirtless-dude-shredding-hard-and-partying-harder rep is a reality. But he also says Pike doesn't let the fifth quarter slow him down. Even when hungover, the frontman is the first one in the studio ready to go.

Like Pike himself, Communion is a combination of blunt and sharp edges. Pike channels Motörhead's Lemmy through a deep acid gargle. But on such tunes as the seven-minute trudge "Ethereal," he does it with an impressive depth and sustain that's suspiciously close to actual singing.

So yeah, Communion isn't just a frontal assault. The instrumental "DII" opens with Skynyrd-style chugging. Pike then marches into a slow, lyrical riff, after which the dirge ends with the weeping sounds of strings. Although that bit originally began as a jam on a Hammond organ, its final execution comes via Mellotron.

"It's just a really cool-sounding instrument," explains Pike. "The end of the piece, [drummer] Des [Kensel] dreamt this riff. He was reciting it to me, and I was trying to understand what he was saying and put it down on guitar. And he's all 'Dude, I hear all these violins and shit.' And Jeff [Matz, formerly of Zeke] was like, 'The Mellotron is a cool instrument for that.'"

As with most genre tags, "stoner rock," "stoner metal," and "sludge" aren't a big enough umbrella to cover the spectrum of music they describe -- especially once keys and strings are in the mix. Pike doesn't care what you call the music; he just knows what it does for him.

"I just see it as an outpouring of our souls," admits Pike. "That's how we have fun. That's how we get rid of demons. It's my job. But it's also my life. It's what I grew up doing. It's the only thing that truly expresses who I am."