Reliving the glory of America's giant leap for mankind. 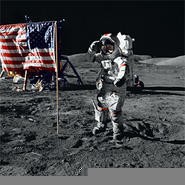 Four decades ago, the American space program was synonymous with human achievement. Thirty-eight years later, the program that punched a hole in the heavens barely dents the public consciousness.

As a well-timed corrective, now comes a British documentary, In the Shadow of the Moon, to restore the space program's luster. A stirring account of the Apollo program's mission to the moon, as remembered by some of the few men ever to view the Earth from the other end of a telescope, David Sington's doc recaptures the thrill, the terror, and the heroism of man hurling himself into the void.

The wide-eyed, square-jawed kid brother of the Manhattan Project's atom-age skulduggery, the U.S. space program was the smiling face of Cold War rivalry: a tug-of-war rather than nuclear Stratego. In the Shadow of the Moon swiftly sketches the speedup of the space race: Yuri Gagarin's pre-emptive flight in 1961, followed by Alan Shepard's orbital journey a month later, and JFK's challenge to seize the lead.

Soon the president is fallen, and the mission takes on new urgency, even if -- to Apollo 8 and 13 vet Jim Lovell, one of the film's many sage talking heads -- the many misfires and kablooey launches signaled "a quick way to a short career." But the test pilots of Apollo, one cool crop of cukes, had dreamed of pushing the envelope from childhood. "It was a time when we made bold moves," one astronaut shrugs.

It was also a time when a diversion couldn't have come in handier. A rumbling chopper ushers in footage of student protests and planes cratering the Vietnamese countryside. The stock images of blooming fireballs queasily echo the shuttle blastoff shots. Meanwhile, the astronauts say, they were oblivious to the upheaval sweeping the country in the late 1960s -- and as long as they were airborne, everyone else was oblivious too.

But the movie's appeal -- and NASA's -- lies in that one giant leap for mankind, a triumph that lifted the species with a single footprint in the lunar dust. The movie contrasts the reminiscences of Apollo vets Mike Collins, Gene Cernan, Buzz Aldrin, and Alan Bean with footage of their youthful rocket-jockey selves. The extra beats and speechless pauses as they remember the world beyond are mystical -- inner glimpses of men who have seen the inexpressible. Each appears humbled (or, like Aldrin, haunted) by his privileged view of man's true scale.

The stark HD interviews set off the movie's treasure trove of NASA archival footage -- much of it unseen, some of it synched with sound for the first time. Apollo 11's moon landing represented the summit of scientific progress, but it also triggered a new distrust: If Stanley Kubrick could fake all this stuff, why couldn't Uncle Sam? The spruced-up shots of space travel here won't win over conspiracy theorists, but if these are special effects, they have a mundane serenity missing from subsequent decades of CGI.

As Sington chronicles rocketry's role in salvaging the American psyche, the romantic sweep of all this space-age chivalry is undeniable. Need a pick-me-up after this decade's barrage of foreign-policy failures? In the Shadow shows every nation on earth -- even the Soviets and the French -- fixed on the U.S.'s can-do comet, and recalls the wondrous moment when America had the entire world looking up, up, up, and not away.