What Michael McDonald, Kenny Loggins, and the rest of the world's yacht rockers have to teach us. 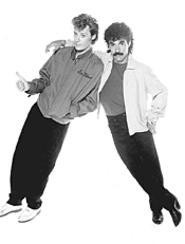 Shut the fuck up. All of you, shut the fuck up. [Daryl] Hall and I will not stand idly by as you California vagina sailors stab the American airwaves in the balls with your shit [pause] music. -- John Oates, protesting the Doobie Brothers' "What a Fool Believes," on the show Yacht Rock

As I opened the site -- which I have bookmarked -- and saw that there was a new episode of Yacht Rock up, I gasped. You know that jolt of elation that courses through you when your boy smacks a homer in the bottom of the ninth or when your favorite band plays the first few notes of your favorite song for the encore? That's what happened to me -- just now -- when I discovered Yacht Rock #3.

What is Yacht Rock? Well, a couple of things. Yacht Rock is a short, mockumentary-style show created by J.D. Ryznar, Hunter Stair, and Lane Farnham. You can view it at www.channel101.com, which is the web outlet for a short film series put on by two L.A.-based comedian-writers, Dan Harmon and Rob Schrab.

"Yacht rock" is also the term for the particular genre of music that is so lovingly and mockingly embraced by the show. As Hollywood Steve, the show's "host," puts it in the first episode, "From 1976 to 1984, the radio airwaves were dominated by really smooth music, also known as 'yacht rock.' These yacht rockers docked a remarkable fleet of No. 1 hits. And every song has a story behind it." Each episode tells a new tale, and the characters are a cast of really smooth guys: "music-industry mogul" Koko Goldstein; Michael McDonald, keyboardist and vocalist for the Doobie Brothers; Kenny Loggins and Jim Messina; Hall & Oates; Steely Dan; Jeff "Skunk" Baxter; Christopher Cross; Chicago's Peter Cetera; and, in this most recent episode, Steve Perry, formerly of Journey.

Basically, yacht rock consists of the songs playing on the car stereo when your parents drove you to kindergarten, songs that are burned in your memory, even though you can't remember where you might have heard them. We're talking tunes like Steely Dan's "Hey Nineteen" or the Doobie Brothers' "What a Fool Believes" or England Dan & John Ford Coley's "I'd Really Love to See You Tonight" or Dan Hill's "Sometimes When We Touch," which is a really sad song about a guy trying to be honest about his feelings. Really, what self-respecting music hipster couldn't relate to these lines: "Romance and all its strategy/Leaves me battling with my pride/But through the insecurity/Some tenderness survives"?

If you're in your 20s, these were -- and probably still are -- your parents' songs. I hereby give you permission to borrow them from Mom and Dad, just as you would an old lamp sitting unused in the attic.

You see, there's something uniquely enjoyable about yacht rock that I think a lot of you are missing out on. As my new favorite show so hilariously plays up, the genre consists of quintessentially bad music, made by musicians who took themselves and their sentimentality way too seriously. But that describes pretty much all of pop music. What makes yacht rock special is that these musicians took themselves that seriously, sold millions of records, and, in the end, made some of the most innocuous music ever. Yacht rock was never brash or reckless. It had no dark underbelly (although one of Yacht Rock's funniest tacks is to give it one by, for example, making Hall & Oates a couple of shit-talking bullies). It existed in a vacuum of sorts, right between the end of disco and the beginning of synth pop, college rock, and glam metal. It was neither stylish nor edgy. It stood for one thing and one thing only: itself. The goal of the musicians who made yacht rock was to engineer the most virtuosically smooth pop song possible. It was a noble, albeit paradoxical and extremely funny goal.

Take, for example, Steely Dan, a band responsible for hits like "Rikki Don't Lose That Number," "Reelin' in the Years," and the aforementioned "Hey Nineteen." (Don't think you know that last one? You probably do. It's the "Cuervo Gold" song.) Steely Dan was a talented band. Those guys had some fiercely complicated arrangements, could orchestrate difficult tempo and key changes, and could pull off some sweet harmonies. Really, go back and listen if you don't believe me. And yet all this talent was in the service of . . . what? Advocating flange pedals? No. These songs were written in the name of smoothness itself.

Now, I don't want anyone thinking this is some kind of arch hipster gesture I'm making. I'll grant you that the main reason I like yacht rock is because I find it funny, but there's also something undeniably endearing about the music. I think it's that underneath the smooth grooves and sweet melodies, there's that charming clumsiness that goes along with white males trying to express themselves earnestly, and that's real pathos. Yacht rock is the harmonious sound of grown men tripping over their own feelings, as hilarious as it is touching. My advice is to embrace its damaged cast of characters, invite them into your record collection. As Yacht Rock's Kenny Loggins puts it, "When a friend is drowning in a sea of sadness, you don't just toss him a life vest. You swim one over to him."