Hop a ride with Cleveland's most unpredictable band. 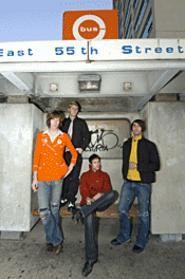 Michael di Liberto speaks the way he writes, in a series of digressions. The frontman for Boatzz is fond of antsy songs that never sit still. From pop daydreams to punk nightmares, their repertoire is defined by misdirection; they'll headfake you constantly, till you don't know what's coming next.

In conversation, di Liberto can be just as hard to pin down. Drinking fizzy red lambic at the Grovewood Tavern in Collinwood, he fits right in with the chatty bohemians sipping wine beneath an impressionistic painting of a cat. He has a knack for turning basic talking points -- like, say, how his band got its name -- into rambling dissertations.

"It's a long story, but in a roundabout way, it's a play on the Beatles, but it wasn't intentional," he says haltingly. "There was an old Beatles record that I was drawing on, and I just came up with 'Boatzz' out of 'Beatles.' I used the B and covered up the E and made it an O. I used the A and T, and then covered up the L-E-S with two Z's. It's definitely different. It's kinda like the music, man; it keeps people guessing."

Perhaps the only definitive thing one can say about Boatzz is that there's really nothing definitive about them. Their urbane art-pop has alternately been described as "trippy elevator music," "the Zombies meet Blur," and "Joe Jackson rolling in an Escalade listening to Supergrass and doing some serious party favors." Their recent debut, Peacock Blood, encapsulates all those influences and also brings to mind the Super Furry Animals, Carole King, and the Buzzcocks. There's dizzy white-boy funk ("Steal a Bike"), along with rowdy new-wave free-for-alls ("Mexican Bourgeois") and growling garage rockers slick with perspiration ("Too Much Is Never Enough"). Sassy protest songs are sandwiched between oversexed, bedroom-bound come-ons and stoner-friendly instrumental jams.

But Boatzz stop short of hammy self-indulgence by tethering these flights of fancy to shiny hooks and harmonies, which give the songs an immediacy that most overtly diffuse bands lack. "I wrapped this heady shit all up in a pop song," di Liberto coos at one point, "just so you could sing along." And you actually can.

"A lot of times, bands are either going to write catchy pop tunes or songs with really intelligent lyrics and a lot of changes," says bassist Dave Gibian, Boatzz' junior member, whose silver tie matches his gleaming lip ring. "To find a medium in there is huge."

Of course, lots of groups craft postmodern goulash by mixing disparate elements. It usually yields brainy and stilted pastiches of sound, as if all they wanna do is show off the breadth of their record collections. Boatzz's concoctions are seldom so forced.

"For me, this band means complete freedom," says di Liberto, a self-avowed record-collector geek. "I feel like this is maybe the first band that all of us have been in where we really feel like we can do any style of music, and it will sound like us. I would like to think there's continuity to it, no matter if we're genre-hopping."

Given the players' previous bands, extensive genre-hopping should be expected: Guitarist Matt Jauch spent time in Cleveland hardcore troupe Chalkline; most recently, he and drummer Eric Mzik were part of the once-promising rock band Solo Flyer. Di Liberto gained notoriety in the punk outfit 30 Lincoln before veering into moody alt-rock with Ambulance. That band led him to New York City for a full-time stint in music.

"Me and my friend wrote a Levi's commercial and starred in it, so we got like two checks, and that afforded me the opportunity to wake up every day and just play piano," he says. "I didn't really have to go to a job or anything. I was still really poor; I probably should have worked, but it was my dream to move to New York and just play music every day. That's actually when I wrote a lot of these songs."

Di Liberto eventually left Ambulance and was evicted from his apartment when the money ran out. So he moved back to Cleveland and hooked up with Jauch, whom he had known for years. They launched Boatzz as a side project in the fall of 2003, but after Solo Flyer began to wane last year, Boatzz took over.

"I've always wanted to be in a band that's as good as the bands that I like a lot," says Jauch, a lanky blonde in a vintage Police tour shirt. "I felt like Solo Flyer was getting there. With this project, I feel like this is finally in league with what I would go out and buy."

Recording offers came in, and the band nearly signed with a label that the band declines to name. But the deal was scuttled when Boatzz refused to heed input on the design and sequencing of Peacock Blood.

"We were very, very close to signing with this label, we had the contracts and everything, but they didn't want to do the packaging the way we wanted it," Jauch says. "With the sequencing, they threw a fit with having 'Mexican Bourgeois' be first."

And so Boatzz released the disc themselves, in the brightly colored eco-pack they preferred over a jewel case. They'd be delighted if it did well enough to land them a booking agent. Already, they've made a name with their overheated live gigs in support of Brian Jonestown Massacre, the Killers, and Secret Machines, among others. They're regulars at the Beachland and the Grog -- largely because their sound is wide open, which makes them a good fit with just about anyone.

"We take a lot of pride in really being the only band from Cleveland that sounds like we do," di Liberto says. "One of the things that people always tell me is that they don't know how to describe us. I feel that we can do pretty much whatever we want.