It's another foot-stompin' birth of Jesus in Karamu's Black Nativity. 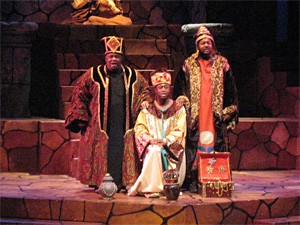 Given all the cheer-spreading that goes down this time of year, it seems odd that so many observations of Jesus' big day are such solemn affairs, with kings and shepherds bowing in silence under a night sky. Where's the joy?

Well, you can find it in the first act of Black Nativity by Langston Hughes, the annual Christmas offering at Karamu House. Once again employing infectious African drumming, knock-'em-dead gospel singing, and spectacular choreography, this production can make even holiday grouches stand and shout, "Hallelujah!"

It all starts with the drumming, a syncopated pounding that stirs the blood, performed by percussionists Andre Taylor and Baba Drene as the robe-bedecked cast enters singing "Joy to the World." Then the narrator takes over, intoning the genealogy of who begat whom, until it ends with Joseph and his pregnant wife, Mary.

The familiar story progresses from the couple's issues with securing room at an inn (it's so hard to find a nice hotel room around Christmas) through the arrival of the three kings and other gift-bearers. But this is no ordinary tale-telling. Director and choreographer Terence M. Greene weaves the music seamlessly together with energetic dance that borrows from African folk, modern, and ballet to create an ever-shifting panorama of passion.

In the key roles of Joseph and Mary, the achingly young Lloyd Boyd and Amber Ivy dance as if their lives depended on the next leap, the next extended arm. Their evocative movements make you feel the pain of rejection and the soaring fulfillment when little JC is born.

The dozen or so singers, meanwhile, rip into gospel melodies such as "Go Tell It on the Mountain" and "O Jerusalem in the Morning" with immense feeling and skill. Standouts in this cast are James Washington, James Smith, and Syrmylin Cartwright, who handle most of the heavy vocal lifting on the male side.

Among the women, who are all excellent, Samantha Turner does a particularly powerful job on "No Room," and Toyia Wright uses her smooth soprano to great effect throughout. And Morris A. Cammon is an amusing scold in "Rise Up Shepherd and Follow." Even though many of the singers trade off various songs from performance to performance, their skills are so even that no musical glitches are evident.

That said, the second act of Nativity is much less engaging than the first. The action is now set in a contemporary church, with members of the congregation dancing down the aisles and into the pews. But after this rousing beginning, performed to the up-tempo "Sweepin' the City," the proceedings devolve into a series of songs with no storyline save the preaching of the minister.

Reggie Scott, who serves as the transfixing narrator in the first act, plays the minister in the second act, and he delivers Hughes' inspirational words with quiet import. But since the songs can't move a nonexistent story forward, these tunes seem to float off and never involve the listener.

Director Greene sprinkles comedy here and there after intermission, with a vain young man checking out his appearance in the spit-shine of his gleaming shoes and an old couple acting amusingly crotchety. But there's nothing more to save the second half.

If there were a way to incorporate the dancers in the second half of this show, matching the dynamism of the first half, Black Nativity could truly be a transcendent experience instead of a merely exceptional one. It's clear that Greene has the chops to create expressive, electrifying choreography, and many productions of this show made such adjustments. Let's hope Karamu considers such alterations.

But in the meantime, there's much to enjoy in Black Nativity just as it is.