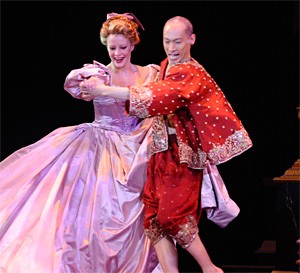 Although most fashion trends come around again, it's unlikely that we'll ever see women wearing voluminous hoop skirts like they did in the 1800s. And based on how glorious these frocks look in The King and I at the Carousel Dinner Theater, that's a damn shame.

King is the endearing and enduring Rodgers and Hammerstein musical that skinheaded Yul Brynner turned into a career on stage and in the Oscar-winning film. And although it lacks a potentate that can rival Yul, the man who invented controlled ferocity on stage, the Carousel production happily excels in most categories, providing an opulent experience both visually and musically.

The story of the Welsh widow who is contracted by the king of Siam to teach his gaggle of children, from a harem of obedient wives, is well known. And the songs, such as "Hello, Young Lovers," "Getting to Know You," and "I Have Dreamed," are dazzling creations that work in any time or place.

Jennifer Hughes brings a quiet resolve and occasionally fiery spirit to the role of schoolteacher Anna. Her singing voice, a soprano that is slightly more muscular than lyrical, delivers the goods as she slowly softens the king's sharp edges.

As the ruler, Francis Jue is a slight fellow who looks like he'd be pinned by Anna two out of three falls. And although he gets plenty steamed at times, some of the nuances of the king's character are not clearly drawn. Since he doesn't exude a commanding stage presence, his waffling in "A Puzzlement," when he questions his infallibility, feels less than monumentally significant.

Director Stephen Bourneuf maneuvers the large cast (approaching 50) with grace on the immense Carousel stage, and there are enough Asian actors to make the entire Siamese locale feel genuine. Also, costume designer Dale DiBernardo and scenic designer Robert A. Kovach spare no horsepower in making the show a treat to look at. The sumptuous outfits, such as Anna's swirling gowns and the king's jewel-encrusted jackets, and ornate pagodas give the production a top-shelf appearance.

But perhaps the most indelible sequence is the ballet done around the saga of "The Small House of Uncle Thomas." This Siamese version of Uncle Tom's Cabin, featuring Asian blackface and choreographed in eastern style by Vince Pesce (with a lot of help from Jerome Robbins' original blueprint), is totally enthralling.

Siam appears so sweet and placid in this play, which took Broadway by storm in the 1950s. So it's almost shocking to realize that, only a few years later, the same country, renamed Thailand, would be where most U.S. air strikes originated in the Vietnam War. Puts a whole new spin on "getting to know you."