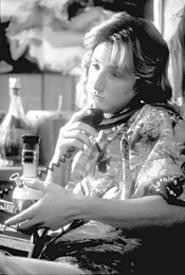 Movies have always been rapt with drugs. From Reefer Madness to The Man With the Golden Arm to Requiem for a Dream, the silver screen has found beauty, sadness, and most of all art in the upward and downward spirals of drug addiction.

"There are multiple ways of looking at the situation in films," explains Bruce Sinofsky, the award-winning documentarian whose latest project, Hollywood High, premieres March 31 on American Movie Classics. "Hollywood has a responsibility to be conscious. [Kids] are gonna naturally experiment on their own, but I don't think they need any help from the movies."

The one-hour program is filled with film clips and interviews (including Willem Dafoe, Jim Jarmusch, and Oliver Stone) in pursuit of both enlightenment and entertainment. For every John Waters quip ("Crazy people could think that in a Disney movie, the tree told them to kill someone. Should we have no more movies about trees?"), there's a sobering, balancing reflection (director Penelope Spheeris: "Look at the way little girls dress when Britney dresses that way. They do what the stars do. You guys have got to wake up").

"You get both ends of the spectrum as to how things are presented in Hollywood films," Sinofsky says. "It's not like fast food that you digest and you burp and you forget about."

Sinofsky is best known for Brother's Keeper, the 1992 Sundance hit about an elderly farmer accused of killing a sibling, and Paradise Lost: The Child Murders at Robin Hood Hills, 1996's harrowing look at three dead children and the teenagers who may be to blame. They're both intensive works of investigative filmmaking -- and worlds away from the tinseltown touch explored in Hollywood High.

"We thought about going to a halfway house and talking to some people who are recovering," Sinofsky says. "But those people don't go to movies. It's insulting to them to use them in a survey of drug films."

Hollywood High never indicts or excuses its subjects, and most viewers will likely come away from the film unsure what the industry's intended message is. "Dealing with addiction is not a pleasant story," Sinofsky says. "You hope there's enough thought processes involved with the viewer that they're thinking about it after they're finished watching it. You want [them] to discuss it the next day with their family, a friend in a coffee shop, or at work.

"You hope that the information that you're translating to them in an entertaining way is something that gets them to think. If you can do that, you've succeeded."