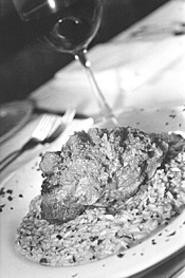 Your basement rec room is probably bigger than Valerio's, Valerio Iorio's eponymous operation on the western edge of Little Italy. Chances are it's more comfy, too: better lit, better ventilated, and assuredly less crowded. On the other hand, it's doubtful that you employ a staff of tall, slender waiters, garbed in dark dress trousers, white shirts, and ties, who roam the room like dashing exclamation points. And unless your mama is from Florence, we'll wager that the meals you serve aren't half as good.

Indeed, prepared in what may be the city's tiniest kitchen (manned by the owner and his brother-in-law, Giuseppe Pilumeli), Valerio's food is as earthy and unpretentious as anything cooked up by a Tuscan nonna. There's slowly simmered veal, Chianti-braised lamb, and firm pastas in light, savory sauces. Parsley, rosemary, and garlic -- lots of garlic, fearlessly chopped into chunks the size of pignoli -- perk up the palate. Artichokes, olives, and capers add pizzazz. And judiciously employed creams, cheeses, and olive oils provide round, unctuous counterpoints.

Four appetizers, three salads, eight pasta primi piatti, and six veal, beef, or chicken secondi piatti make up the small printed menu. But don't even think about getting your hands on it until you've heard about the evening's specials -- an impressive collection of apps and entrées, heavy on the seafood, fired off from memory by waiters who are knowledgeable, professional and, in the European fashion, ever-so-slightly condescending.

On a Saturday night, our server's lengthy recitation seemed to take five minutes, as he rattled off detailed descriptions of nearly a dozen items, complete with sauces, seasonings, and preparation styles. Not even halfway through the evening, he was already becoming hoarse from the oft-repeated oration. And our brains, already buzzing from a 1999 Mastroberardino Lacryma Christi ($31 a bottle, picked from the all-Italian wine list), were ill prepared to process and remember all the salient details -- was it the salmon that was sautéed in white wine with artichokes and the lamb shank that was done in the red wine with olives? Or was it the other way around? But when we suggested to our waiter that both he and his guests might be better served with a printed list, he gazed upon us sadly, as if we were students on a field trip from the "special" school. "This way," he assured us, "is more personal."

In some settings, such behavior would seem arrogant, but at Valerio's, it's actually part of the low-tech, Euro-style charm -- along with inadequate lighting, an HVAC system that had us sweltering one night and freezing the next, and tables that are crowded together so tightly that crossing the room requires the agility of an NFL quarterback. "Like or lump it," it all seems to shrug with supreme indifference. Just don't expect to change it.

If the food and 'tude both seemed tantalizingly Continental, our fellow patrons on a balmy Saturday evening could easily have passed for extras sent over from Central Casting. In one corner, for instance, two black-garbed priests sat hunched over their dolci. One, as plump as gnocchi, was spooning up the most sinful-looking tiramisu we had ever laid eyes on; the other, thin as a strand of spaghetti, was toying with a carefully hollowed-out lemon skin, now filled with tart sorbet. In another corner, beside a youngish blonde, lounged a fit, tan, silver-haired gent, his tight black t-shirt showing off a slim torso and impressively broad shoulders. And when a raven-tressed beauty came gliding through the door, it seemed perfectly naturally to see a server (the one with the buttery Italian accent, natch) hustle over to kiss her hello.

"La dolce vita," a companion murmured, sizing up the nape of my neck with indecent intent.

Luckily, the calamari arrived just in the nick of time. From the first bite to the moment we sopped up the final driblets of peppery sauce with pieces of garlic toast, the creamy rings and tentacles made an ideal distraction. Almost as fascinating was the mountain of tender, oversized mussels heaped onto a big oval platter, a small ocean of white-wine, garlic, and tomato sauce lapping at its feet. And while the antipasto misto -- two thin slices each of zippy Genoa salami, dusky, imported prosciutto, and sharp provolone, arranged with a handful of cured, marinated olives and sun-dried tomato -- seemed relatively spartan for its $10.95 price tag, its deep, rustic flavors were beyond reproach.

Among the specials, classically prepared veal osso buco, atop a mound of al dente, red-pepper risotto, tasted as if it had been simmered all day, not merely for the three hours claimed by our server. A generous rack of lamb, carved into eight bite-sized chops and well seasoned with garlic, rosemary, and olive oil, was lush and juicy. And as for the Chianti-braised lamb shank, the oversized steak knife that accompanied it proved completely unnecessary: a fork and a stern demeanor were all that it took to cleave the succulent meat from the bone.

Snowy white filet of grouper, seasoned with salt, pepper, a few onion slices, and a sprinkling of capers, was simple, but deeply satisfying; and salmon, sautéed in white wine with olive oil, garlic, artichoke hearts, onion, and tomato, was full of flavor, yet deliciously uncomplicated. Small salads of tender baby lettuces in an excessively oily balsamic vinaigrette preceded all entrées, and above-average veggies -- velvety roasted potatoes and garden delights such as crisp green peas or firm green beans -- were served on the side.

We ordered a bowl of homemade potato gnocchi for the table, to accompany the meat and fish, and we couldn't have been more impressed. Fat and firm, yet tender -- and completely devoid of the starchy texture that is the mark of lesser dumplings -- the little pasta knots were perfect sponges for a sleek, assertive Gorgonzola-cream sauce; and divided among four diners, the big dairy flavors were indulgently rich, but not too heavy. Penne al Sapore Mediterraneo -- a toss of sturdy penne, fresh garlic, sautéed scallops, perky sun-dried tomato, and a light cream sauce -- was another dish we'll add to our memory book, although several small pieces of what seemed to be scallop shell made for a gritty surprise. But we're doing our best to forget about a special of spaghetti and scampi. Although the pasta, in a delicately balanced tomato sauce, was particularly toothsome, the shell-on scampi were disappointingly dry, not even worth the considerable effort it took to peel them.

In addition to operating Valerio's, Iorio is also partner in the Warehouse District's notable Osteria di Valerio & Al, and proprietor of the region's first, and so far only, gelateria, in nearby Cleveland Heights. But while it would seem reasonable, then, to expect freshly made gelato to top the dessert list, that is not the case: The minuscule kitchen lacks both the special gelato freezer and the space to house it. Instead, guests must satisfy a sweet tooth with any one of an assortment of fruity sorbets or -- our preference -- with the awe-inspiring tiramisu, a "death by mascarpone" indulgence of espresso-soaked ladyfingers nestled beneath a lofty comforter of smooth, thick, Italian cream cheese.

"That's something, isn't it?" our waiter asked coolly, watching us fight one another for the last spoonful. And I thought that, for just a moment, from the corner of my eye, I saw him smile.