Romantic With A Capital 'R'

Nikolaj Znaider Vs. The Cleveland Orchestra In The Brahms Violin Concerto Leads This Week's Arts Picks 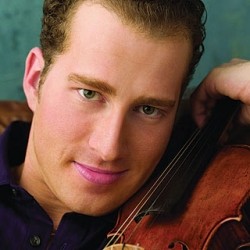 Critics and conductors have had a lot to say about Johannes Brahms' extremely difficult violin concerto in D Major, Op. 77. The 19th-century German conductor Hans von BŸlow called it "a concerto against the violin." The Polish violinist Bronislaw Huberman described it as "a concerto for violin against orchestra - and the violin wins!" It was Huberman's teacher, the great violinist Joseph Joachim, who collaborated with Brahms on the composition and praised it in a "hurts so good" kind of way: "One enjoys getting hot fingers playing it, because it's worth it!" This weekend, just in time for Valentine's Day, Nikolaj Znaider performs the great Romantic concerto with the Cleveland Orchestra at Severance Hall (11001 Euclid Ave.). Znaider's recording of the concerto (and Erich Korngold's Violin Concerto in D, Op. 35), with the Vienna Philharmonic and conductor Valery Gergiev, was released last week on the RCA Red Seal label. Znaider will rejoin the Cleveland Orchestra to play the same piece in April, when the ensemble returns to Miami for another residency there. Other works on this week's program in Cleveland include Tchaikovsky's Symphony No. 4 and Samuel Barber's overture to the Richard Brinsley Sheridan play, The School for Scandal. Performances are at 8 p.m. Thursday and Saturday, and 3 p.m. Sunday at Severance Hall (11001 Euclid Ave.) Tickets $31-$87. At 11 a.m. Friday, the program is performed without the Barber overture. Tickets: $31-$82. Call 216.231.1111 or go to clevelandorchestra.com.

The Year of Magical Thinking

Joan Didion wrote fiction, but she'll be best remembered for her cultural and political writing over the past 40 years. In her 2005 book The Year of Magical Thinking, she chronicled a year in her life, during which she unexpectedly lost her husband and her daughter became gravely ill. She included her daughter's death in the stage adaptation and came to an uplifting conclusion. It plays tonight through March 1 at Actors' Summit Theatre (86 Owen Brown St., Hudson). Performances at 8 p.m. Thursdays through Saturdays, and 2 p.m. Sundays. Tickets: $15 for tonight's preview, regular performances $25-$28. Call 330.342.0800 or go to actorssummit.org.

Utah-based soprano Margo Watson has been to Cleveland before to sing a Broadway program with the Cleveland Pops Orchestra. This week she's back with Vegas-based baritone Michael Lackey to perform a collection of Broadway and movie favorites - including Gershwin, Billy Joel, music from Titanic, Aladdin, Beauty and the Beast, Phantom of the Opera and others - in a program called An Old-Fashioned Valentine. The 7-year-old winner of the orchestra's Jean L. Petitt Music Scholarship competition, Cleveland vocalist Isabela Moner, will give the program an extra dose of cute with a rendition of "Over the Rainbow." The performance is at 8 p.m. at Severance Hall (11001 Euclid Ave.) Tickets: $19-$58. Call 216.231.1111 or to go clevelandpops.com.

Lisa Langford's play InCogNegro -The Political Rise of an Invisible Man couldn't be more effectively timed. It deals with the way black identity is defined in America, which we've seen play out in national politics through responses to Barack Obama: messiah, menace, token or terrorist, depending on the perspective. "This play is about the tension that comes from not being free to define yourself outside of stereotypes - whether you internalize the negativity or rise above it," says director Jimmy D. Woody. The multimedia performance is presented as part of CPT's Big[BOX] series in the James Levin Theatre (6415 Detroit Ave.) at 7:30 p.m. Friday and Saturday, and 3 p.m. Sunday. Tickets: $12-$15. Post-show talkbacks with members of Cleveland's African-American community will be held after each performance. Call 216.631.2727 or go to cptonline.org.

Three artists with very different approaches and responses to the world are showing their work together this month at Asterisk Gallery (2393 Professor Ave.) Thrice Is Nice, which opens with a free reception from 6-10 tonight, presents works by Joshua Rex, Michelle Murphy and Todd Leach. Leach makes metaphors for the human body out of abstract ceramic shapes glazed with the patina of age and decay, sometimes stitched with old kiln elements. "I am fascinated by the ability of the corporeal body, while in a continual process of disintegration, to heal itself," he says. Rex paints the Northern Ohio landscape - the natural, the manufactured, the functional and the abandoned - and finds a quiet beauty in it. Murphy follows two paths in this show, one resulting in watercolors made from pictures of UFOs she found online, and the other a public art project in stenciled valentines to the city, using sarcasm and humor to speak to the region. The show hangs through March 7. Call 330.304.8528 or go to asteriskgallery.com. It's part of the February Tremont Art Walk. Other participating venues include Visible Voice Books (1023 Kenilworth Ave., 216.961.0084 ) which will have works by the Artisans Alliance; Eye Candy Gallery (2173 Professor Ave., 216.241.2740) featuring jewelry made from glass and exotic beads by Linda Lyell; Mastroianni Photography and Arts (2688 W. 14th St.) featuring prints by Beth Mastroianni, paintings by Katelynn Altgilbers and photography by Steven Mastroianni; and Brandt Gallery (1028 Kenilworth, 216.621.1610) showing Mirrored Images, a collection of hand-painted, black-and-white photography by Christopher Kaspar. Go to tremontartwalk.org.

The Chagrin Falls Studio Orchestra is led by the brother-sister team of conductor Stephen Eva (who for years has conducted the tweedy and private Hermit Club Symphony Orchestra) and concertmaster Priscilla Eva (who graduated from the Eastman School and has been in the violin sections of the Opera Cleveland Orchestra, the Cleveland Pops and the Blossom Festival Orchestra). The orchestra offers its second concert ever this weekend, a perfect Valentine's Day date. The 45-piece ensemble performs Bernstein's "Symphonic Dances" from West Side Story, the Disney Prince and Princess Suite arranged by Bruce Healey, a medley from Rodgers and Hammerstein's South Pacific, and some gypsy music by Maurice Ravel. They perform at Chagrin Valley Little Theatre (40 River St., Chagrin Falls.) Tickets: $15-$25. Call 440.247.8955 or go to cvlt.org.

Kids whose reading ventures beyond sanitized retellings of Grimm's Fairy Tales may have run across John Steptoe's Caldecott Medal-winning story from 1987, Mufaro's Beautiful Daughters. Based on a folk tale found in Zimbabwe by G.M. Theal in the 19th century, it's the story of two girls with different personalities and the events that result on their journey to meet, and hopefully marry, the king. The original is told in ink and watercolor pictures, but the Dallas Children's Theatre has brought it to life with traditional African song. PlayhouseSquare presents it in honor of Black History Month as part of its Discovery series. Performances are at 11 a.m. and 2 p.m. at PlayhouseSquare's Ohio Theatre. Tickets: $10-$20. Call 216.241.6000 or go to playhousesquare.org.

If you've been to a show at PlayhouseSquare recently, chances are you've heard bassist Tim Powell in the pit for touring productions like Legally Blonde, Wicked and Spamalot. He's one of the most versatile players around, having supported prog-rock groups like the Moody Blues, Kansas and Yes, and jazz artists like Harry Connick, Jr. and Rosemary Clooney. Today, he gets the spotlight when the Tim Powell Trio performs at CSU's Sundown Jazz Concert at 4 p.m. Other members of the trio - guitarist Bob Fraser and keyboardist Rock Wehrmann - are similarly accomplished. The Sundown Jazz Concert takes place in Cleveland State University's Drinko Recital Hall in the Music and Communications Building (2001 Euclid Ave.). Free. Call 216.687.2151 or go to csuohio.edu.