It's noon on Thursday and Put-In-Bay is being invaded with bachelor and bachelorette parties and folks looking to spin away from regular life with a little help from the bottle. It's about to be Christmas in July — the island's busiest weekend — and the hordes are starting to arrive for a few days of good drinking.

Four 20-something guys from western Michigan just stepped off the ferry and on to Put-In-Bay for the first time, heading down the tiny island's bar-lined main street. They're following their buddy to the hotel where they'll all jam into one room to sleep — pass out, really — for the next three nights. Each guy lugs the essentials: two of them have Busch Light cases resting on top of their rolling suitcases, one's carrying a Coors Light case by the flimsy cardboard handle, another's hauling a big red cooler.

"It's that asshole in the blue's bachelor party," jokes one of them, pointing to the guy across the street.

When asked what their plans are, he responds, "You're looking at them." The group laughs, eyeing the booze. "We're going to make some bad decisions."

They might be chatty later, but right now they don't feel much like talking to a writer. "I'm sober right now, so there's a problem," says the guy with the chinstrap beard. 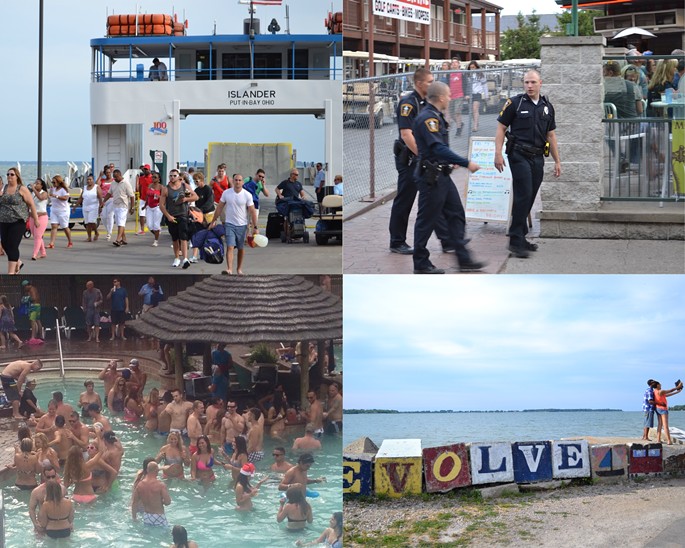 Minutes later, three late-20-something women from Pittsburgh are standing at the same spot on the bustling street, also first timers here. They're lost — sunglasses and sandals on, bags around their shoulders, suitcases and booze in hand — unsuccessfully trying to locate the hotel they booked months ago so they can kick off the weekend.

"We heard about Put-In-Bay from other people who like to drink a lot," jokes Kristen, explaining they have no idea what Christmas in July really entails, but it's why they're here for the next three days. The ends of a beer bong are popping out of her duffle bag, but she doesn't seem to mind.

One of them is dragging the handle of a noticeably heavy blue four-wheeled cooler down the sidewalk: "Lots of beer," Leeanne explains, "but we did put water in there for hangovers." The other interrupts: "And Fireball and vodka and...."

They eventually find their way down a not-so-obvious path toward the hotel through an alleyway next to Mr. Ed's, the bar attached to hotel, and Mist, a fenced-in pool bar where Top-40 remixes are already blasting loudly. "This is exactly what we wanted!" one exclaims. They heard about some rumors of druggings on the ferry ride over, and despite thinking it's kind of "scary," their enthusiasm isn't dampered.

Shortly after checking in to their rooms, the group is quickly back down to the bustling Mist, bathing suits on and water bottles filled with booze in hand. The bouncer stops them and inspects their bottles — it's a bar, after all — so the girls quickly chug the contents and toss the empty bottles in the trash before finding their way to the lounge chairs between the pool and the bar. Their first hours at Put-in-Bay have started right.

Since May, there are have been at least a dozen documented incidents of people suspected of being dosed with date-rape drugs at Put-In-Bay bars, with no arrests. In that time, there have been at least three reported rapes of drugged or heavily intoxicated women and only once — when police came upon a 27-year-old Mentor man in the act, with several eye witnesses who spotted him tackling her to the ground — has somebody been arrested so far. On Saturdays this summer, EMS has had to regularly transport girls from the popular pool bar Mist to the hospital after someone slipped date-rape drugs into their drinks.

Put-In-Bay has a problem and the three women from Pittsburgh have planned their weekend right in the epicenter of it all.

Just a 60-mile drive west and a short ferry ride from Cleveland, Put-In-Bay feels like a completely different world. For such a small island (it's less than one square mile, and counts fewer than 400 year-round residents) it's many things to many different people.

It was first inhabited by Native Americans hundreds of years ago but, like most land in the country, it was taken over by white settlers in the 18th and 19th centuries. During the War of 1812, Oliver Hazard Perry used the island as a naval base, taking advantage of its ideal location in Lake Erie to help defeat the British. Perry's a big deal on the island: the massive (and phallic) 352-feet tall "Perry's Victory and International Peace Memorial" stands on the east side, and his famous "don't give up the ship" slogan can be seen on flags and T-shirts all throughout the island.

Its economy is nearly entirely based on summer tourism and real estate for families buying summer lodges.

During the week, it's full of multi-generation family vacationers who book the summer houses long in advance — it's a perfect spot to bring the kids on their summer break. All over the island, families whiz by on rented golf carts heading to and from the main downtown drag, Perry's Cave, the Heineman's winery, the docks, state parks, and other family-friendly attractions. Day trippers are there, too, coming either on the ferry or their own boats, docking on the north side of the island.

But on the weekends, the demographics and culture shift abruptly. Starting on Thursday afternoons, ferries load up with young people who couldn't care any less about the family-friendly tourist traps of Put-in-Bay spread throughout the island in a weekly invasion of Spring Break. They're coming to drink and make some mistakes with the thousands of strangers in search of the same thing.

"Oh man, it's so different on the weekend," says Branden, a 28-year-old Cleveland native who's working for the season as a bartender on the island he vacationed on with his family as a kid. "During the week, you get a lot of day trippers who come up to the ports — there's a lot of people. But the weekends are just crazy — people come up here specifically to party and have a good time, you know?"

Over the past decade or so, the island's downtown area transformed dramatically.

"It's crazy how its blown up," says Branden, pointing in the direction of all the bars. "It used to be just a main street with a few bars: the Roundhouse, Beer Barrell. The Boardwalk was just a little fish shack, pretty much, and now it's a monster that has four different restaurants and a bar. There was only like one pool over by the airport a long time ago, and now there's like 12 pool bars all over."

So many of the weekenders only think of Put-In-Bay for its weekend party scene, without any idea that there's more to the island than the daily cycle of overpriced booze, pickup attempts and crushing hangovers.