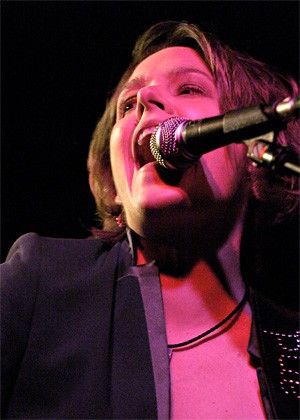 Rover's Morning Glory will return to FM airwaves Tuesday, April 1, on 100.7-FM WMMS, part of Clear Channel's empire. When his contract recently expired, Rover was offered a better deal by WMMS. He explained the move to Scene:

"[WMMS has] a better signal that reaches further," says the guy who was born Shane French. "They really have a lot of resources available at Clear Channel — a lot of billboards, ties with a concert-promoting division — that help the show. I think [old boss] CBS had become a little complacent. And I was able to secure more money for everyone on the show."

The program ran on 92.3-FM WKRK from 2003 through February 15. Rover, originally from Las Vegas, became a local phenom with his average-guy approach to his show, avoiding the usual shticky radio voices. CBS began syndicating Rover's Morning Glory in 2005, and CBS relocated the all-talk program to Chicago in 2006, positioning Rover as a potential replacement for Howard Stern. Morning Glory bombed in the Windy City, and operations returned to Cleveland six months later.

"He's the biggest radio show in town," says WMMS program director Bo Matthews. "I think Rover's show is distinctly Cleveland, because he is real. [Morning Glory] is like reality TV on the radio."

Morning Glory has a four-year deal with WMMS. Rover says Clear Channel is considering syndication. The entire staff will return, including supporting characters Duji and native Clevelanders Dieter and Dumb.

"On-air, it will be 95 percent of what people have come to know," says Rover. "But we'll be able to enhance the product in a lot of ways. We have some technology initiatives we're going to be rolling out in the near future. We're looking at adding some video feeds and podcasts, which CBS never allowed us to do. We'll have a lot of interesting stories about everything that's happened over the last couple months, and I'm looking forward to sharing it." Read a full interview with Rover on C-Notes at blogs.clevescene.com.

• After a three-week medical hiatus, Colin Dussault's Blues Project returns to action this weekend, with a pair of shows at the Savannah (30676 Detroit Road, Westlake) Friday, March 28 and Saturday, March 29. Frontman Dussault was hospitalized for a torn aorta in early March. "I am on the mend and should be OK," says Dussault.

• Cleveland production team the Kickdrums is working on creating new music with Terry Urban, the club DJ-mixmaster whose musical arsenal ranges from Kanye West to Slayer. The final results may include samples, live music, or both. "It's 100 percent about creating with no boundaries," says the Kickdrums' Alex "Fitty" Fitts. Urban and Mick Boogie host their monthly old-school hip-hop party, I Got Five on It, at Touch (2710 Lorain Avenue, Ohio City) on Saturday, March 29. The night will also double as a CD-release party for the Kickdrums-produced solo debut by Spittin Image MC Verbal.

• Fistula's ever-shifting lineup has been reduced to a duo for now. While the sludge group looks for a drummer, guitarist Corey Bing will sing and pound the skins, with Bahb Branca on bass. The band plans to hold open auditions June 1. Learn more at MySpace.com/Fistula666.

• A representative from Joe Walsh's management company says he remains busy with the Eagles and has made no progress on a new James Gang album. Management had no clear reaction to Scene's demand that he change his priorities.

• The new Cleveland Matinee (2527 W. 25th Street) is closed indefinitely after a car collided with the club on Friday, March 21. Owner Mario Nemr said the band Black Sabath had just finished their set, and 25 to 30 people were present. Nobody was injured.