The Donnas, four tough chicks from California, break into the all-boys three-chord treehouse. 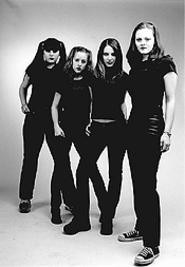 "Mike Tyson is here," Donna A. (née Brett Anderson), lead singer for the Ramones-inspired Donnas, relates via phone from a Waffle House on their way to their first-ever Albuquerque appearance. "Every tour has had a theme. The last one was the "Fitness Tour,' because we thought that our label thought we were too fat. All of the hotel rooms were second-story, and all the clubs were like basements or second-story, so we were doing stairs all day long. This tour is the "Celebrity Tour.' When we played in L.A., William Shatner was there . . . he goes out with my aunt. And Sandy West from the Runaways was there."

It turns out that this is also the "Ultraviolence Tour,' as the Donnas have witnessed some fairly savage beatings in their travels so far.

"Everywhere we've gone, we see people getting the shit beat out of them," says Donna A.

"When we were in L.A. the other day, this guy stopped his car in the middle of the road, and this other guy stopped in front of him and just pulled him out of his car and beat the shit out of him. It was crazy. And right when we drove into L.A., we saw these people beating someone up at a bus stop. And now we're eating breakfast with Mike Tyson. Weird!"

Strange occurrences seem to follow the Donnas on a pretty regular basis. During their last trip through New York, the Donnas had the opportunity to talk to Dee Dee Ramone -- a momentous occasion, considering the debt that the girls owe to the leather-and-shredded-denim knuckleheads from Forest Lawn. It wound up as weird as having breakfast with the guy who made a meal out of Evander Holyfield's ear.

"[Ramone] was really crazy," Donna A. says of the experience. "All he would talk about was his dogs. He was like "Yeah, I'm moving to upstate New York, because my dogs hate it here in the city.' And I'm like "That's great. Can we talk about something else?'"

It's all just par for a very odd course, as far as the Donnas are concerned. The quartet began six years ago, first as the Palo Alto, California band Ragady Anne, which morphed into the relatively successful Electrocutes. About this time, the girls decided on two very important career paths -- to emulate the Ramones and to record with Darrin Rafaelli of Super Teem Records on a trio of singles and their first full album. At that point, the Donnas were still operating under dual banners, alternately playing and recording searing speed metal as the Electrocutes and bashing out three-chord stomp anthems as the Donnas. The very different modes of presentation and execution ultimately took a toll, and the band was forced to decide which way to go.

"For two years, we did both at the same time," says Donna A., "but it started to be the only thing that people would talk about -- that we have these alternate personalities, and they were all confused. We just decided that, since more people were coming to the Donnas shows, and that music went over better live, we would just do that. That's when we started to put more into writing the songs for the Donnas."

The Donnas' first newly christened effort was an eponymous full-length disc in 1996, which led to their signing by Lookout!, the Berkeley-based punk label that had previously foisted Green Day and Rancid on the populace. Two years later would see the re-release of the Donnas' first album and the recording of the aptly titled American Teenage Rock n' Roll Machine, which thrust the punky quartet squarely into the whirlwind of critical acclaim and media attention.

Last year turned out to be the turning point for the band. The Donnas began working on their third album, Get Skintight, resulting in their first album of all-original material (other than the cover of Mötley Crüe's "Too Fast for Love"). The response thus far has been overwhelmingly positive, and the subsequent tours over the last eight months have been proof of that, with a string of capacity crowds showing up across the country.

Part of the success of Get Skintight goes to the hard-working McDonald brothers, Jeff and Steve. The Redd Kross brain trust came to the studio with plenty of input for their young charges. "They helped us a lot with scheduling and when to move on to vocals and whatnot," says Donna A. "They were great to work with."

The Donnas have also had their share of film work to help spread the gospel. An appearance and soundtrack entry on the cultish 1998 film Jawbreaker ultimately led to the Donnas taking a crack at Kiss's classic "Strutter" for inclusion on the soundtrack to last year's Detroit Rock City, the Kiss homage that bombed at the box office.

"We were talking to Mercury, and they were kind of interested to see what we were doing," says Donna A. "We were talking to this guy Tom, and next thing we know, they're asking us to do a song for the movie. They originally wanted us to do "School Days' by the Runaways, but we decided that would be a little too cliché. We figured, if it's a Kiss movie, then we should do a Kiss song. We thought it was going to be in the movie, but they decided to use the Kiss version of "Strutter' in the movie. It would have been cool, too, because it was when Edward Furlong was stripping."

The Donnas will continue to tour Get Skintight for the next several weeks, until they take a break this spring to begin work on their fourth album. The current tour already features one brand-new song ("Hot Pants") that is likely to show up on the new album, tentatively slated for a fall release. And so the "Celebrity Tour" rolls on. Although each day brings some new famous or infamous personality into the Donnas' circle by accident, the band has a stop already scheduled that promises to be its personal high point, as far as stargazing is concerned. For their upcoming gig at the Roxy in New York, they'll be the opening act for Joan Jett & the Blackhearts, their only non-headlining show.

"Every time we go to New York, we're supposed to meet her," Donna A. says with exasperation. "We called her manager and set up a time, but we still didn't get to meet her. So this time I think we're guaranteed."

As Donna A. relates the band's excitement over the prospect of finally meeting one of the pioneers in their thumping genre of music, it becomes clear just how unaffected they are by everything that's happening to them right now. At this moment, they're not the Great Estrogen Hope for the male-dominated world of dumbass rock and roll. They're just four girls with a record who are beside themselves to be meeting the woman who softened the ground where they're planting today. They couldn't be more thrilled, and that's what is so thrilling. It may well be the secret to the Donnas' presence, as well as their sound and appeal.