Mateo's takes few risks in the kitchen, but delivers when it counts. 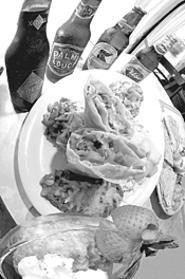 Don't drop by Mateo's California Mexican Restaurant scouting for tofu burritos and whole-wheat tortillas topped with brown rice and alfalfa sprouts. Despite the Cal-Mex claim in its name, this homey Akron eatery veers only slightly off the path beaten by most other local Mexican restaurants, serving a large assortment of mostly familiar Tex-Mex standards.

But while we didn't spot a single duck tamale on the menu (with or without Thai peanut sauce), we have few qualms about recommending Mateo's to casual diners. Its prices are modest, the portions are large, and meals offer enough little twists and turns to make the place a worthwhile addition to your culinary road map.

Chef-restaurateurs Alberto and Zoila Vega (originally from Guatemala, and now in Akron by way of Los Angeles and Pittsburgh) opened their restaurant in Akron's scenic Merriman Valley last spring, in space that formerly housed the Russian restaurant Globe. Named after their grandson, Mateo's is clean and tidy, with a rectangular, split-level dining space, plenty of windows, and robin's-egg-blue walls that serve as a gallery for colorful photos and paintings by local artists.

While the admittedly boxy dining room lacks much in the way of intimacy, staffers try their best to compensate with friendliness and good cheer. Soft-spoken Zoila, for instance, routinely chats with guests, while Alberto, nattily attired in crisp chef's whites, is the very model of good-natured culinary efficiency as he prepares and plates each order in his small, partially open kitchen. Together, their kindly presence infuses the space with a true mom-and-pop vibe, in the best possible sense of the term.

Servers, too, are friendly as all get-out, although a lack of training sometimes undermines their efforts. During a busy Friday night, for instance, we watched in amazement as tables around us were served the wrong dishes by an inexperienced waitress who, we later found out, was pretty much just grabbing plates at random as they came out of the kitchen. Happily, by the following Sunday morning's brunch, remedial action had been taken, and service proceeded more smoothly.

In fact, that brunch was probably the high point of our stops at Mateo's, primarily because of the unusually large selection of equally unusual omelets and egg dishes. Combinations like Huevos California (two fried eggs topped with shrimp, Monterey Jack, and zesty tomato salsa) and Huevos Hacienda (two fried eggs served over crisp corn tortillas, topped with roasted sweet peppers, onion, tomato, and cheese) made for a deliciously different take on the typical Midwestern mid-morning meal. And the California Omelet, stuffed with fresh, juicy cubes of pineapple and honeydew melon, then drizzled with honey and dusted with cinnamon and nutmeg, was a real eye-opener -- more so, even, because of just how delightfully it went down with zippy Spanish rice and buttery refried beans.

Offerings on the regular lunch and dinner menu, however, tended to be a little more mundane. Taco salads, burritos, chimichangas, quesadillas, nachos, and tortilla "pizzas" all seemed to offer the same litany of fillings and toppings: ground beef, shredded beef, chicken, shrimp, chorizo, or limp "roasted" veggies that tasted as though they had been steamed, not roasted at all. A chunky homemade relish of tomatoes, nopales (prickly-pear cactus), red onion, cilantro, and sweet red pepper was tasty but typical. And at least in the case of a shredded-beef chimichanga, a bed of finely chopped lettuce below and toppings of guacamole and crema fresca above quickly turned the formerly crisp tortilla shell into an old softy.

Still, side dishes included some refreshing twists. Lard-free refried beans -- some mashed, some still whole -- were sleek and creamy, unlike the pasty and bland versions found at so many restaurants; short-grain rice was firm and nutty, not boiled to a pap; and fresh fruit -- one day pineapple, another day cantaloupe -- added so much yin to the spicier dishes' yang that it seemed like an inevitability, not merely a garnish.

More adventuresome diners, however, will want to turn directly to the menu's one-page addendum of house specialties, where options finally drift somewhat out of the mainstream to include such items as tamales, a black-peppercorn-crusted strip steak, and grilled fish soft tacos (one of Cal-Mex cuisine's signature dishes). A duet of lush, juicy roast pork soft tacos, for instance, loaded with marinated tenderloin, pickled Napa-cabbage slaw, and the omnipresent tomato-nopalito relish, were worth every dribble they sent spurting down our chins. And golden slabs of pan-fried yuca (the mildly sweet, slightly starchy root known also as cassava), topped with lots of lean chorizo, Monterey Jack, and still more nopalito-tomato relish, then finished with dollops of sour cream and sturdy guacamole, offered a riotous tango of sweet, salty, and spicy flavors.

In addition to the regular menu and its addendum, there is a list of seven lunchtime tortas, offered weekdays from 11 a.m. to 3 p.m.; the round, overstuffed sandwiches are tops on our list of must-tries the next time we're in the neighborhood. Among the tempting-sounding combos are roast pork and ham, garnished with cheddar, Monterey Jack, beans, guacamole, and chipotle mayo on a grilled bun ($5.95); the egg machaca torta, with shredded beef, scrambled eggs, tomato relish, and Monterey Jack ($6.95); and the seafood torta, with shrimp, crab, and cheese ($6.95). The very reasonable prices include a cup of soup or fried sweet potatoes and the usual side of fresh fruit.

To drink, Mateo's margaritas -- traditional, mango, peach, strawberry, and raspberry -- are available frozen or on the rocks, in two sizes or by the pitcher. There's also a selection of nine more-or-less unusual Latin American beers, including Cabro and Famosa (Guatemala), Pilsen Calao and Cristal (Peru), and the full-bodied black Xingu lager and the crisp, clean-tasting Palma Louca pilsner, both from Brazil; all are $3 a bottle.

For a final taste of something sweet, the Vegas whip up a cool, creamy version of the classic tres leches cake, a double-decker disk of sponge cake slathered in a creamy whipped topping and set adrift in a custard-like pool of "three milks": evaporated milk, whole milk, and two-percent. The dessert menu also includes cornflake-crusted deep-fried ice cream and three different takes on deep-fried dessert burritos, including one stuffed with pineapple cheesecake.

That little number will have to wait for a future visit, but we did sample both the vanilla and pineapple ice cream versions, made with solidly frozen ice cream wrapped in a flour tortilla, then deep-fried until crisp. Sliced at a jaunty angle and arranged on end, like giant sushi, the dessert was drizzled with honey, sprinkled with cinnamon, and sided by clouds of whipped cream. Yummy -- particularly the fruit-packed pineapple version. But be warned: These definitely should not be ordered on a first date! Too gooey to pick up, and not at all amenable to the knife and soup spoon that were provided, the little devils put up a mighty fight before we managed to pack 'em away -- and we have the sticky fingers and dappled shirts to prove it!

Serious foodies, of course, will wish that Mateo's menu were a little more daring, delving into the Asian-fusion riffs seen in San Diego Cal-Mex restaurants, say, or at least making use of some of the less nutty health-food ingredients (hey, tofu burritos can be awesome). Still, the kitchen generally turns in a solid performance, and if its repertoire is more safe than sexy, at least there are enough out-of-the-ordinary touches to make the spot stand out from its peers. Far longer road trips have been taken, on much flimsier excuses than that.