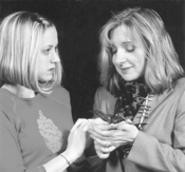 Safety, a world premiere at Dobama Theatre, is a work for those who love a challenge. It's not a play that audiences can glide through. With its heavy symbolism, flights of fancy, and relentless wordplay, it's akin to working through a New York Times crossword puzzle.

Here is a writer who loves to lead funhouse tours full of odd distortions through her tumultuous adolescence. Her latest concerns a misfit teenager named Egg. This moniker may be due to the character's emotional fragility or the fact that both her parents comport themselves with the eccentricity of cuckoo birds. Egg exhibits the same brand of nubile maladjustment as Member of the Wedding's Frankie.

As the play commences, she is goading the school principal into a fit of insanity by refusing to remove her red chapeau (red hats, like stiletto heels, are symbols of burgeoning female sexuality).

She's expelled from school for lack of charisma and cooperation. Her parents -- an indomitable lepidopterist mother and a reclusive etymologist father -- pack her into a suitcase as though she were a stuffed poodle, and as the walls of the set split apart to reveal a starry skyscape, we find that she has been whisked to the outer reaches of suburbia, seeking that eponymous "safety."

It is at this point that a collective light bulb begins to flash over the spectators. The vague stirrings of a beloved childhood favorite, connected to peanut butter, Walt Disney, and Mary Martin, begins to emerge.

Greeting the transported teenager is an irresistible, androgynous boy-man named Toochie. Played by Jason Markouc with a maniacal twinkle, he forms a bond with the tenuous Egg. Together, both yearn for a loving family and wondrous adventures.

It soon becomes apparent what's going on here. The mischievous Miss Morton has trumped the Great Lakes Theater Festival by kicking J.M. Barrie's Pan into the 21st century. The festival has been desperately trying to figure out a way to yank this Edwardian tale into modern-day Cleveland, making it relevant for kiddies whose fantasy lives are attached to electronics and, at the same time, figuring out how to keep references to fairies in the Metroparks from becoming the year's biggest snigger.

Morton has accomplished this without a single direct Barrie reference, yet somehow she has grafted this tale onto Rebel Without a Cause. She has encapsulated the heart of both stories: the cruelty of youth and lost children looking for comfort. Egg and Toochie both seek adventure in a sterile world, colliding on Rollerblades rather than in the air.

Director Roger Truesdell is so in tune with Morton's nuances, it's as if the two shared an apartment. His infinitely detailed direction helps chisel Morton's mysterious word paintings into compelling shapes that linger long after the theatergoer's midnight snack. Dana Hart's Father, living in a perpetual fog, wearily trods on a giant historical map, trying to make sense out of word origins and at the same time understand his own melancholy existence. Laura Stitt's performance as Mother is a riveting cross section of neuroses and tenderness. She studies a quivering butterfly with wonder, offering it the unconditional love she withholds from husband and daughter. This gesture reveals a marriage on the brink of collapse. Whereas Peter Pan is about the coming together of families, this play is about surviving the coming apart.

Portraying a neighbor who has come to suburbia to seek safety from urban danger, Jacqi Loewy (a transported New Yorker who, by law, should be made to grace Cleveland stages bimonthly) has a bewitching saucer-eyed gentleness. When she delivers a monologue about a tree whose leaves are the coats of murdered children, the play reaches its apogee as a dark parable.

If the Russkies had dropped a bomb on Dobama's opening night, two-thirds of the local theater population would have been annihilated, for our thespian multitudes were there to cheer one of the city's most respected playwrights, glorying in a work that is not only haunting and boldly acted, but, best of all, completely Made in Cleveland.