At least the view is keen from the Nautica Queen. 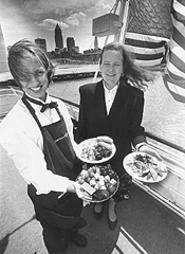 From the moment that the bottom edge of the sun touches its surface, the silvery green waters of Lake Erie take just two minutes to swallow the entire flaming orb. Moments after the sun dissolves into the lake, a pale full moon appears above the city, floating between Cleveland State University's campus and the Terminal Tower.

It's a spectacular view, and one you miss if most sunsets find you speeding down the Shoreway after work.

But if you are one of the lucky folks aboard the Nautica Queen, rocking gently on Lake Erie's waves, this display of nature's fireworks is laid out before you in all its astronomical glory.

On this point I will brook no debate: The Nautica Queen offers guests the most gorgeous views of any dining spot in Cleveland.

On the other hand, the food is a mixed bag of mostly ho-hum standards, ranging from pretty good to not very good at all.

But, hey, Gilligan: If you want great food, go to a restaurant. If you want a breathtaking, ever-changing view of the city's skyline, book a three-hour dinner cruise on the Nautica Queen.

We boarded the three-deck, three-hundred-passenger craft around 6:30 p.m. on a recent Saturday night, with dinner and departure scheduled for 7:30 p.m. Most of the tables on the two enclosed and climate-controlled dining decks are banquet-sized, and on this night several large groups, including a wedding party and employees from a local hospital, were making good use of them. A handful of tiny tables for two are located near the ship's bow, but my guest and I were seated at a table for four, where we were soon joined by a couple of friendly out-of-towners, on board to take in the sights. (Yes, Li'l Buddy, Cleveland is now a tourist destination.)

Our pleasant server greeted us and promptly took our cocktail orders. Although booze, soft drinks, and appetizers are heavily promoted throughout the trip, their cost is not included in the price of the package. At $4.95 for a dozen wings, $1.50 for a Pepsi, $3.75 for a Heineken, and $6.75 for a Cuervo Gold margarita, this can be a pricey spot to put on a buzz.

At 7:30, right on schedule, the Nautica Queen left its dock on the West Bank of the Flats and set sail for the mouth of the Cuyahoga. On luncheon cruises, musical entertainer and local historian Rich Vranich doubles as tour guide, pointing out the sights as the ship heads into the lake, sails west toward Lakewood and Rocky River, and then sails east, turning back toward the river just east of Burke Lakefront Airport. But on sunset cruises, he concentrates on performing tunes that, on this night, ranged from "Misty" to "The Piña Colada Song."

As Vranich played his guitar, we were called to the modest buffet station by table number. Luckily for us, we were at Table Two, so we were among the first guests to enter the line. With only three buffet locations to serve three hundred guests on two dining decks, the delay for the last visitors to the line must be maddening. In fact, some folks were just getting their salads as we were finishing our desserts.

The servers stood by to take our salad plates back to our table, and we were told to continue through the line to select our hot entrées. The obvious consequence of such an arrangement is that, by the time diners get back to their seats and eat their salads, their hot foods are cold. Then again, with a whole shipful of hungry eyes watching us enviously, who were we to complain?

Entrée selections included roasted red-skinned potatoes with butter and rosemary (done to perfection and robustly flavored); steamed and buttered yellow squash, zucchini, and carrots (not bad); and poorly drained penne pasta, mixed with whole button mushrooms and bits of fibrous artichoke leaves in a thin, mild cheese sauce (you figure it out).

A slice of medium-well-done, chef-carved prime rib was small and very fatty, but tender and flavorful. Not nearly as good was a portion of Chicken Bistro—a slice of tremendously dry, chewy chicken breast that could not be revived even by the nice, creamy horseradish-mustard sauce that accompanied it. An extremely thin slice of roast pork was also dry, although the brown gravy that came with it gave it some moisture. And a piece of Pollock Florentine—a small, thin piece of white fish topped with salty spinach—was so parched that it nearly shattered when poked with a fork.

We were never offered the coffee or iced tea that was included in the price of our meal, so we made do with plastic cups of water until our server came by to ask if we were ready for dessert. (Although the buffet is billed as "all you can eat," we were not encouraged to make a return trip.) A modest wedge of frozen Sara Lee cheesecake topped with thawed strawberries was the final touch.

Cheesecake dutifully picked at and dinner thus dispatched, we took leave of our table companions and made our way to the open-air upper-level observation deck, where we could enjoy the evening's real attractions.

The captain was just turning the ship back toward the east when we stepped onto the observation level, with an unobstructed view of the setting sun on our left and the downtown skyline, like a range of man-made mountains, rearing up on our right. We were between a mile and a half-mile out, a crew-member told us, and would be moving closer to shore as we headed toward the airport. From our vantage point above the water, we marveled at the golden reflection of the skyscraping Society Bank building stretching out across Erie's blue-green waters, a stunning view forever hidden from landlubbers.

After the beautiful sunset, the lake slowly turned gunmetal gray in the moonlight. As the ship bounced gently on the waves, a flock of noisy seagulls flew across the face of the moon, and Vranich began a poignant rendition of "The Circle of Life." God forgive me, but I swear I felt myself becoming mellow.

Apparently, I wasn't the only guest so afflicted. We spotted couples of all ages clinging to one another by the railings, stealing kisses between appreciative glances at the city's sparkling skyline—waterfront gems like the Rock and Roll Hall of Fame, the Great Lakes Science Center, and the Browns' new stadium, as well as downtown behemoths like the Terminal Tower and the BP Building.

Downstairs, as the Nautica Queen made her way back toward the mouth of the Cuyahoga, Vranich changed his tune to old disco chestnuts like the Electric Slide and "YMCA," and some of the more energetic couples took to the dance floor. Most of us stayed outside in the moonlight and balmy breezes, though, staring over the rails as the festive lights of Flats landmarks like Fagan's, Landry's, the Watermark, and Max & Erma's came back into view. Minutes later, we found ourselves docked safely in front of the Nautica Entertainment Complex and ready to disembark, beautiful images of our city, as seen from the lake, still twinkling in our heads.

Those extraordinary views of Cleveland are why you sail the Nautica Queen. The food? Just consider it a brief interruption of your sightseeing. Then, if you're hungry when you get back, remember: There's still plenty of time to make it over to Sammy's for a really good meal.