Like what you see from the Women's Professional Softball League? Make an offer. 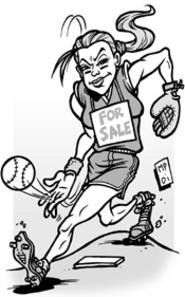 In February, the four-year-old Women's Professional Softball League notified its four teams that it was calling an indefinite "time-out," as league execs began working on a plan to relaunch six to eight teams in new markets for 2002. The announcement left 45 of the world's best softball players without jobs.

"It was a complete surprise to a lot of us," recalls Kyler, a 27-year-old pitcher who had played for the league's Akron team since it formed in 1999. The former Cleveland State pitcher is now an assistant softball coach for Bowling Green State University. "I was scared, because I have always said, 'I will never quit softball.' It would have to be taken away from me."

In an effort to find cities willing to take on team ownership, the WPSL is sponsoring a summer Tour of Fast-Pitch Champions, a barnstorming promotion through 14 cities that pits WPSL all-stars like Kyler against last year's Olympic softball gold medalists. The two teams will square off in Akron's historic Firestone Stadium this weekend.

"Akron is the pivotal [city], because it has all the elements to launch a team and be successful," says Joey Arrietta, general manager of the All-Stars. According to league officials, Akron makes a strong candidate for both its stadium and its ongoing commitment to softball.

Firestone Stadium, built in the 1920s, had been home to the Akron Racers until the WPSL called time-out. It received a $3 million renovation in 1999, making it one of the country's finest softball parks.

"I think it's a jewel," Arrietta says. "It's an ideal softball facility. Even the Olympic players who have played there say it's visitor-friendly."

Arrietta, who coached softball for 11 years at the University of Akron, calls Akron a serious softball town -- the "model city" for WPSL teams. "This is their game," she says, noting that nearly half of Ohio's high school championship softball teams come from the Akron area -- including Manchester this year.

"The city has embraced this game. You don't throw $3 million into a project if you don't believe in what lies ahead."

League officials won't comment on whether the city or anyone else has expressed interest in bringing pro softball back to Akron. (The WPSL's homepage prominently features the link "Own a Team.") Arrietta will say only that she's confident Akron will have a team by 2002.

If the city does take on a team, one thing is certain: It won't pay the inflated wages typical of the men's game. The average salary of professional women's softball players is $8,000 to $10,000 a season -- about what some major-league baseball players make per at-bat.

But for now, Amy Kyler's only concern is making sure she can still play the game. "Right now, it's not about money. It's about making something work."