The roots-rock band the Lonely Hearts evokes the greats.

by Michael Gallucci and Lucy McKernan 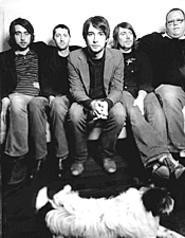 It's fairly easy to pick out the Lonely Hearts' influences; after all, their name is cribbed from the title of one of rock's most heralded albums, made by music's most revered foursome. "The Beatles, the Byrds, Neil Young," rattles off frontman Will Holland when asked what he listened to growing up in Texas. "We found our own sound within all that." The band (which also includes brother Josiah) is now based in Nashville, where it recorded its just-released debut EP, Love + Politics. "Growing up, it was OK to be southern," says Holland. "The music's different. It's not like New York rock. I love that stuff, but a lot of it is in your face." The Lonely Hearts are part of the Ten out of Tenn Tour (with Griffin House and Trent Dabbs), which comes to the Lime Spider (207 South Main Street in Akron) at 9 p.m. Tuesday. Tickets are $7, available by calling 330-762-2350. -- Michael Gallucci

Even before it was touted as one of our best defenses against terrorism, duct tape served man well. And at this weekend's Avon Heritage Duct Tape Festival, the sticky adhesive receives props with games, sculptures, and a parade. The Duct Tape Guys (a pair of pals who've gathered many, many uses for the tape in a series of books) will be there dispensing tips and displaying some of their creations, and last year's winners of the Stuck at Prom Contest (in which high-school students create tuxes and dresses out of colorful tape) will show off their winning wear. Craft stations will also be set up, so attendees can make a polyvinyl wallet or rose of their very own. The fest sticks around from 4 to 11 p.m. Friday, 10 a.m. to 11 p.m. Saturday, and noon to 8 p.m. Sunday at Veterans Memorial Park (on Detroit Road) in Avon. Admission is free; call 866-818-1116. -- Lucy McKernan

In the unlikely love story Bad Guy, a pimp obsesses over a college girl and eventually leads her into prostitution. Director Kim Ki-duk, who made the thoughtful Spring, Summer, Fall, Winter . . . and Spring a couple years after this 2001 film, stages Bad Guy so that the audience becomes complicit in the victim's degradation (particularly in the casual voyeurism). It's an unsettling and provocative trick, one that draws in viewers while simultaneously leaving them distanced. It's at the Cleveland Cinematheque (11141 East Boulevard) at 7 p.m. Friday and 9:05 p.m. Sunday. Admission is $8; call 216-421-7450. -- Michael Gallucci