Salt of the Earth

Animals, some vegetables, and a mineral for a name: Halite flavors up local favorites. 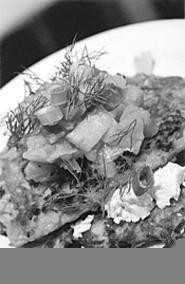 In its mind's eye, Cleveland will always be a workingman's town -- a wholesome, 1950s sort of place, where children play stickball in the street, Dad totes a lunchbox to the mill, and Mom spends her day in the kitchen, grilling kielbasa or frying up a mess of walleye.

Not to get all psychoanalytical on them, but one suspects that this is the quaint little world that Halite's owners, Jack Anfang and Ricardo Sandoval, wish they still inhabited. Just look at their menu, chockablock with such retro dishes as potato pancakes, deviled eggs, and liver and onions. Then take in Halite's decor, made up of enough chrome, vinyl, and black Formica to outfit the most stylish of mid-century bomb shelters. Then again, simply consider the name, Halite, which is the technical term for salt. Is it a coincidence that one of the nation's largest deposits of halite is right off the shore of Lake Erie, in the Cargill Cleveland Salt Mine, and that the workers who harvest it are some of the city's last remaining blue-collars? I don't think so.

Still, if Halite's zeitgeist is a blast from the past, it's the past as reimagined by two of the city's most savvy, individualistic restaurateurs -- guys who know that their hip target audience (also cultivated at the duo's Fat Cats and Lava Lounge) digs a good joke as much as anyone. But when it comes down to the food, quality and value rule the day.

None of which is to say that this snug, 40-seat restaurant, open only since September, has yet achieved perfection. A weekday lunch, in fact, took a blow from awkward service, blaring background jazz, and a few flat-footed preparations, including a breathtakingly salty sandwich of bresaola (thinly sliced, air-dried, salt-cured beef filet which, in this case, tasted identical to Armour chipped beef), topped with goat cheese, arugula, and grated Parmesan, on a length of toasted French bread so desiccated that it practically turned to dust between our teeth.

An arugula side salad also missed the mark. Loved the toasted pine nuts, crumbled goat cheese, fresh orange segments, and fruity cranberry vinaigrette; hated the limp, pale arugula. In the hope that this was a one-time oversight, we ordered the salad again on a weekend visit; this time, not only were the greens flaccid, but the pine nuts were missing in action. (In a later conversation, Anfang vowed to get to the root of the arugula problem.)

There's a paucity of meat-free options available, especially at lunchtime, a situation that posed a minor dilemma for a vegetarian companion. Eventually, he decided upon spaghetti in bagna cauda (typically, a savory sauce of garlic, olive oil, butter, and anchovies), if the kitchen could omit the promised middle-neck clams. We were impressed when the server returned to tell us the chef would not only leave out the clams, but would add sautéed veggies if we wished. We were less impressed, though, when the dish actually arrived -- with overcooked spaghetti, a bland, watery sauce, and not enough veggies to be of any consequence. (Some of that sharp, grated Parmesan -- which helped drive the bresaola over the salty edge -- would certainly have livened things up; alas, none was offered.)

And yet, and yet . . . When the kitchen (manned primarily by Anfang, assisted by cooks Alesandro Garcia and Rene Lopez) is in the groove, it turns out sophisticated versions of "comfort" dishes that are far above average. Just look at what they do with a dinner app of potato pancakes, for instance, transforming them into a sort of New-Age latkes, flavored with leeks, fortified with panko, and fried in olive oil until their edges are crisp and brown and their centers are buttery soft. No plebian sour cream and applesauce for these dapper fellows. Instead, the two cakes get a further update from a layer of creamy goat cheese in between, and a topping of sweet-tart apple and fennel "ragout," with just a hint of fresh ginger, for a clever, classy, and delicious reconstruction of the Eastern-European standard. (And for a lunchtime entrée, the kitchen will complete the culinary reference by tossing on a length of grilled kielbasa!)

It's the same with the deviled eggs, two Grade-A jumbos split down the middle and filled to overflowing with a grown-up blend of yolks, mayo, and finely chopped black tiger shrimp and green Sicilian olives. And knowing that we eat first with our eyes, Anfang and company even take the time to settle the monochromatic eggs on a bright tangle of shredded carrots and festive red pepper.

At dinner, our knowledgeable server revealed that Halite's version of the Friday-night fish fry was one of the restaurant's most popular dishes. Now, there are some excellent perch or walleye fries at Cleveland's vintage neighborhood bars, and we've had a chance to sample most of them. But never have we caught anything quite as arresting as the pouffy-battered nuggets of monkfish ("poor man's lobster") that Halite's kitchen turns out. Exceptionally sweet and meaty, and served with creamy housemade cole slaw accompanied by what are undoubtedly the city's best tempura-battered sweet-potato fries, this is what steelworkers must eat in heaven.

Of course, not everything here is a "classic with a twist." Some dishes -- such as the bubbling pot of Gruyère fondue, made with the requisite white wine and brandy -- are simply straight-out classics, elevated by attentive preparation and quality ingredients. Then there's the most excellent Danny Melt, slathered beneath deeply caramelized onions and melted Gruyère, and served on marbled light-and-dark rye bread. The key to the burger's stunning Kobe-beef-like tenderness, though, is the prime-quality ground meat that is used, scored from stand H-12 at the West Side Market (butcher and bon vivant Greg Chonko's spot, which up to now we really thought was our own little secret!). Side this sucker with a salty, peppery slab of housemade pickle, some spicy ketchup, and an enormous battered jojo potato, fluffy as all get-out, and you've got some serious pleasure on your plate.

To wash down all this goodness, the venerable Art Deco bar (remaining from when this Ohio City street corner was occupied by Traci's) stocks a broad, international collection of moderately priced wines, with most bottle prices checking in at between $22 and $45. A small number of wines are also available by the glass or, even better, by the half-bottle (a practice we wish more restaurants, at all price points, would adopt). There's also a short but enthralling assortment of brews, ranging from Arrogant Bastard Ale, on tap, to Old Speckled Hen, Young's Double Chocolate Stout, and Lindeman's Framboise Lambic, in bottles.

It is true that, back in the day, the neighborhood bar wasn't known for its fanciful desserts. So if anyone needs further convincing that Halite's cuisine, for all its nostalgia, is firmly planted in the present, just have them check out the yummy housemade sweets, items like soft, fudgy chocolate-pudding cake, topped with a dense fog of rum-flavored whipped cream and set adrift on a pool of pumpkin crème Anglaise. Or even better, try the bananas Foster, quite possibly the region's most impressive riff on this much-abused workhorse, with literally melt-in-your-mouth lengths of warm, pan-fried banana in a buttery, almost blackened, sauce of rum and caramelized brown sugar, with a generous scoop of creamy (but still solidly frozen) vanilla ice cream, all sprinkled with a handful of walnuts. The phrase is horribly overused, we know, but for its lush texture, limpid sweetness, and concentrated fruitiness, this dessert was really "to die for."

Fortunately, nothing so drastic is required to partake of the Halite experience. Just walk on in, pull up a chair, and expect to be impressed.