A new season for the Browns of education. 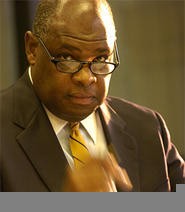 It seemed a curious sales pitch. CEO Eugene Sanders had just announced Plan No. 7,915 for the "sweeping reform" of Cleveland's schools. Now he was surrounded onstage by an "army of believers," men resplendent in fine suits of gray and black, cheering on this latest round of optimistic paperwork.

There were the city pols, the guys who show for any proclamation shiny and new, then disappear like your deadbeat brother-in-law whenever there's work to be done.

There were the business leaders, those who know the district as home to chaos and effortless looting, and say the rosary every night when they depart city limits, thankful they don't raise their own kids here.

And, of course, there were the East Side preachers -- holy men content to be trotted out for the Requisite Photo-Op Projecting Unity, but equally content to sit silently the rest of the year while their parishioners are screwed.

Sanders was simply following the game plan of those who'd come before him: Announce a plot of grand rebirth, then surround yourself with all of our lasting icons of failure.

It's doubtful Cleveland bought it.

For decades we've seen the same men conduct the same ceremonies to present the same glorious maps for resurrection. You know the drill: Get the new guy to fashion a plan. Call the stenographers in the press. Round up your underlings to fill the audience. It's as if they're staging a play called Civic Leader, where they all assume starring roles as men of action.

But you also know the ending by heart -- don't you, Cleveland? The cameras leave. The actors go home. The exalted plan retires to a drawer somewhere.

Three years later, they're back to produce the same play with a slightly rewritten script and an all-new leading man.

But let's pretend, for a moment, that we're a forgiving audience, willing to suspend disbelief. And let's assume the new CEO understands he's encircled by stiffs. When you make your living surrounded by sniper fire -- moronic politicians above, irate parents below, shiv-wielding teachers and administrators on every side -- you come to the game with no shortage of cunning.

So the smart play is to pull the usual suspects close and let them preen for the cameras. They get what they want: all the glory and none of the work. You get what you want: a chance to make things happen without their interference.

Back in Toledo, where Sanders came from, they'll tell you he's a real guy.

"The board of education members I've spoken to found him to be an honorable and trustworthy superintendent," says Ignazio Messina, who covers schools for The Toledo Blade.

"He's been very open," says Lisa Sobecki, chairwoman of Toledo's Parent Congress. "He's worked closely with parents in our district. The different programs he put in place in Toledo have worked well."

But there's one thing conspicuously absent from said thesis: It doesn't address labor. And here's where disbelief can be suspended no more.

Cleveland's schools, after all, are the Browns of education, only much, much worse. They haven't just sucked for a few years. They've been winless for decades.

Part of the problem is that they keep hiring the scholarly equivalent of Butch Davis: the charlatan with pretty words and fetching plans, but with all the substance you get at Taco Bell.

Equally problematic is the roster. The administrative staff is loaded with mayoral loyalists and Democratic Party hacks, people who can barely spell "education," much less deliver it. Former Mayor Mike White famously used it as a living cemetery for all his favored footmen. And if you saw photos of Sanders' new "army of believers," you saw current Mayor Frank Jackson front and center.

Jackson's brother Nick collects $124,000 annually from the district. Previous credentials: overseeing the Indictment of the Week program at the water department. Experience in education: 0.

Then there are the teaching ranks. It's safe to assume most arrived in the earnest quest to nurture children. It's also safe to assume that after years of corruption, ne-glect, and hopelessness, many now believe "caring" is some weird fish from Norway.

Which means it doesn't matter if Socrates is laying down the script. If you're counting on supervisors who can turn any idea into a Superfund site, or workers who last exerted themselves during the Reagan administration, you can reach the same destination more quickly with a book of matches and some dynamite.

So far, Sanders has shown little interest in assaulting such problems. Although the FBI taped Nate Gray selling school contracts like parlay cards, there's been no investigation. And now the CEO is working no-bid deals with Fifth Third Bank -- whose board he used to sit on -- and stonewalling info requests from the Bond Accountability Commission.

These aren't the actions of a new sheriff. They're the moves of a guy with reserved parking at the trough.

We called to ask Sanders about all of this. Of course, we never heard back.

So we'll ask him here: Are you a real guy, one who's come to Cleveland to do the work of children? Or are you just the latest guy to rip us off?

If it's the latter, you should skip the plans and press conferences, and go straight to the stealing. It's never been hard here.

But do let us know when the "army of believers" are ready to stage their next play.