'Howie Smith vs. Howie Smith' pits a local sax master against his own creativity. 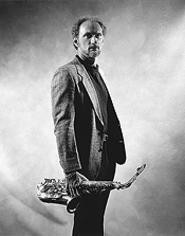 When it comes to recording, Howie Smith keeps a low profile. The saxophonist and CSU professor has only one recording available -- 1991's Second Door on the Left on Sea Breeze Records. And aside from that fairly straight-ahead venture, you would have to dig deep into recent recordings by the Frank Mantooth Jazz Orchestra or Bop Stop regulars the Jazz Unit -- big bands in which Smith keeps a regular chair -- just to get your Smith fix. Not to say that Smith isn't the creative or motivated type. Or that, like many musicians, he has nothing to play that wouldn't fit comfortably within the confines of 12 bars.

Smith just seems to naturally gravitate toward activities that best fit his kinetic personality and his wild interests. Making recordings takes patience, persistence, and work after the act of creation -- all qualities Smith shuns. Once he makes a musical statement, his mind has already wandered on to the next one. Instead, Smith has chosen to focus his own energies in settings that better fit his disposition. One of these settings, perhaps his most personal, Smith presents yearly -- it's a continuing series of bold, expressive, unpredictable music-centric events. "The Concert in Progress," as he has come to call it, brings together jazz, classical, and electronic music and tosses them in the same pen with performance art, multimedia, and trampolines. Smith has staged his Concert at CSU since taking a post at the school and now continues with its 20th installment, "Howie Smith vs. Howie Smith."

At the center of this event, as always, is Howie Smith -- his saxophone surrounded by whatever context (sounds, sights, sidemen) he imagines. These one-time projects have never toured or enjoyed encore performances. And Smith has never recorded them for release. So if you miss this one, it's gone forever, just like the last 19.

Sitting in his airy fourth-floor CSU office, Smith details some of the things he's done for his concerts in the past and some of the things he plans for this next installment. As he talks, he becomes increasingly excited; he drums his fingers over his desktop, and his eyes jerk around the room like a cat who's spied a housebound moth. Almost from the very beginning, he explains, the concerts have served solely as a creative laboratory for Smith.

"First year I was [with CSU], at some point during the year, I was asked if I wanted to do a saxophone recital," he says. "I said "sure.' I started trying to figure out what I was going to put on it. I thought, "Well, it should be a mixture of chamber music and jazz, since that's what I do.' And then I decided, "Well, if I'm going to do that, I should put at least one of my own compositions on it.' There was a piece I had written for saxophone, tape, and electronics that had never been performed. So I put that in. Then I thought, "Well, I've always wanted to do a piece for saxophone and strings.' I put that on. The jazz thing I chose to do was also my own thing, and at that point, I decided that it was going to be all my own compositions."

Smith also planned the first couple concerts with a touch of sensationalism and corny humor that set them well apart from any standard chamber fare.

Over the years, Smith has put on some truly bizarre concerts on Euclid Avenue. One year, he recruited 59 saxophone players for a concert of surround sound that the audience wasn't soon to forget. Another year, he improvised along with the facial expressions of actors whose faces were projected above the stage. In what was probably among the most fascinating collaborative concerts ever staged in Cleveland, Smith once actually recruited Plain Dealer critic Wilma Salisbury as a participant. He asked her to write a review in advance of the concert, based only on the titles of the pieces he was planning to play. She imagined what they might sound like and reviewed them as if she had actually heard them. In concert, Smith and company then improvised the pieces based upon the descriptions in Salisbury's review -- effectively reversing the concert/review process and inventing a new method of improvisation in the works. As surprising and strange as his concerts get, for Smith, the planning is simple.

"Every year, it's really been the same thing," he says. "I start out finding people I'd like to make some music with. It doesn't matter if it's a jazz concert or what it is. Usually it's with people I don't get a chance to work with very often. I ask them if they want to be involved, and then I start writing music."

The title, "Howie Smith vs. Howie Smith," suggests that, this year, Smith might be coming full circle in some way. Not so, he says. This year will be no different than the rest -- which is to say, completely different. Smith is billing the show as a solo concert. But as those who have made a point of attending Smith's shows over the years probably have already guessed, the show couldn't be just that simple. Suffice to say that Smith won't be rehashing his '94 sort-of solo recital. The saxophonist has been in contact with an audio engineer and a composer who works in electronic music -- both of them new to CSU. Don't be surprised if they turn up at the show and help Smith stretch the notion of a solo concert. But past that, Smith isn't talking. After all, part of the thrill is not knowing.

"I have a good house," he says. "A lot of people come out, and they come out not really knowing what's going to happen at the concert that year. They might know who's going to be on it. They know something about me. But they usually don't know what's going to happen until they get there. Composers want to tell people what they are about to hear. I never tell them that. Everything is established right there with the audience that shows up."