The Decemberists embrace complexity while keeping it simple. 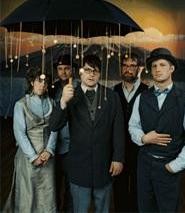 For many indie-rock fans, "Oh dear God, why?" was the initial reaction when Portland, Oregon's the Decemberists leapt from Kill Rock Stars to the majors and released The Crane Wife, an epic and all too audacious song cycle based in part on an ancient Japanese folk tale. Much has been made of the record's obvious prog-rock influences; critics are name-dropping Yes, Pink Floyd, and King Crimson. And while the album's 11 songs are intricately crafted stories of love, war, blood, and renewal, the disc is really quite moving in its simplicity.

Of course, it all could have been rot.

"It's an ambitious record, and we were just as likely to fall on our face as we were to make it out OK," admits Colin Meloy via phone, shortly before kicking off his band's North American tour. "The story is really simple in a way that only stories that have been passed down generation to generation through some ancient oral tradition can be. As a consequence, it's also a little confusing. The crane wife weaves this amazing cloth in her room, and the neighbor suggests that her husband make her weave more, so the husband looks in on her [she then turns into a crane and flies away]. The lesson isn't really that clear. I can't tell if it's not to be greedy or not to peek in on your wife."

Meloy is the Decemberists' soaring vocalist and de facto composer (he wrote every track appearing on The Crane Wife). And as the conversation clearly reveals, he's a songwriter possessing a penchant for wordiness. (Meloy doesn't say "twenty-five" when he can say "five and twenty" is how Rolling Stone recently put it.) Then again, the record's most evocative lines -- say, "We'll fill our mouths with cinnamon," from the track "Sons and Daughters" -- are easy in their grace. Unfortunately, this is rarely pointed out by music writers who are too busy noting the "Victorian factor" in Meloy's work.

"On The Crane Wife, I wasn't so focused on doing verbal, alliterative acrobatics," he says. "I think in other records, I've really been into crunching words, making these lines that your tongue likes to trip over. They're fun to read and to sing, but on this record, I was intent on getting a story across in a very simple, yet poetic way."

It was producers Tucker Martine (also an experimental electronics musician) and Death Cab for Cutie's Chris Walla that helped the Decemberists achieve that simplicity. Not only were formative recordings filled with some totally off-the-wall tunes, but they were constructed from a dizzying array of instrumentation: guitar, bouzouki, Hammond organ, accordion, synthesizer, percussion, upright bass, electric bass, and more.

"When I finished the demos, I had no idea what to do with them," explains Meloy. "They were the weirdest collection of songs I'd ever written. I wrote to everyone [Walla, Martine, and the band] and said, 'I am so nonplussed.' Walla wrote back and said this was a complicated project and that we needed to set up a sequence and stick with it. He sequenced the demos, and it's pretty close to the sequence on the record."

Walla was right. By adhering to a basic game plan when creating The Crane Wife, Meloy's complex narrative is well designed, finely tuned, and capable of making unexpected twists and turns without falling apart. "The Crane 3" opens the proceedings with Meloy crooning "Each feather it fell from skin," and from there, listeners are sucked into the singer's personal universe: equal parts indie pop, prog-rock, and Eastern myth.

But don't take Meloy for some artsy, overly pretentious introvert. There's a lighter side to the guy, and it comes out when relaying classic, band-on-the-run horror stories.

"On our first national tour, we played in Chicago, and the club got struck by lightning," he says with a laugh. "The funny thing is, the day before we played Madison, and there'd been a tornado warning."

Perhaps Cleveland's approaching winter will give Meloy yet another memorable gig to talk about.