Alkaline Trio gets clean on its pristine new LP. 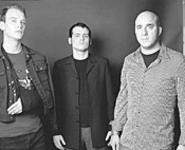 Alkaline Trio's latest album, Crimson, sounds crystalline, from its minor-key piano introduction to its nuanced closing ballad. The band's recent live sets have exhibited unprecedented energy, its newly animated stage presence punctuating the pop-punk hooks. To some longtime listeners, who have weathered cloudy recordings and spotty shows, these are welcome developments, as if an amiable yet derelict uncle started showering regularly and showing up sober for birthday parties. But others pine for 1998's murkily mixed Goddamnit and the wildly unpredictable gigs of yore.

"I don't understand people who don't like good production," says singer-bassist Dan Andriano, on the phone from his Chicago home. "It drives me crazy. We hear all the time from people who prefer the way our first records sounded, but if we had more money and time back then, we would have made them sound better. I always want our albums to sound more polished, as they say. Polished is the point for what we do."

The recording studio isn't the only place where Alkaline Trio has sought moments of clarity recently. In a twist on the Behind the Music template, the band has become a beacon of clean living at the height of its success, instead of after a pathetic fall. "The current world of Alkaline Trio is not nearly as fraught with and fueled by drink and drama as in the band's formative years," understates the first line of the bio on the band's website. There was a time when its members always seemed to be cringing through hangovers (especially during daytime slots on the Warped Tour) or staggering through drunken stupors.

"We figured it's about time we tried to put on a really good show," Andriano says. "It's hard to do that when you're going out drinking every night."

The trio even eats healthy these days, with drummer Derek Grant touting veganism and singer-guitarist Matt Skiba chatting with PETA about his favorite vegetarian restaurants. "At least in a food-and-sustenance sense, we've always taken what we put into our bodies in a fairly serious light," carnivore holdout Andriano explains.

The Trio's dietarily compatible members Grant and Skiba also share a more bizarre bond: membership in the Church of Satan. Founded in 1967 by Anton LaVey, this denomination encourages its followers to cultivate sinister images, a suggestion the Trio has embraced with devout zeal. Its stylishly evil aesthetic, which involves red-and-black outfits, Sharpie-thick eyeliner, and prominent tattoos, has inspired non-satanic acts such as Good Charlotte, Green Day, and My Chemical Romance to undergo dark-fashion makeovers.

"It's flattering, but you start to wonder whether people that are becoming fans of all the bands that have taken on that look know where it's coming from," Andriano says. "I'm not saying we invented it -- we drew influence from the Damned and the Misfits -- but it wasn't very popular when we started doing it. It's strange, but if you start worrying about stuff like that, it becomes less about being a songwriter and more about trying to control what's going on in some kind of scene."

Skiba's unorthodox spiritual leanings also inform his songwriting, resulting in grim lyrics that coexist curiously with glib melodies. It's as if a cruise ship dropped anchor and accidentally impaled a whale, filling the sea with gore. On Crimson, he combines his trademark morbid metaphors ("Dethbed" addresses a failed relationship, a suicide, or both) and supernatural stories (the vampire ode "Your Neck") with true-crime tales about the West Memphis Three and Manson family member Sadie Mae Glutz.

Andriano's nasally voice is much cleaner and, well, nerdier than Skiba's (though Jerry Finn's bright production on the two latest albums has narrowed the gap). Lyrically, he deals with broken hearts rather than literal violence.

"I write from an introspective point, and I stick to what I know," he says. "Sometimes I dig deep into the past or write about a recent conversation I had with a friend that struck me in a peculiar way."

Alkaline Trio's most popular songs, judging by shouted requests at concerts, are "Private Eye" and "Stupid Kid," both of which come from 2001's From Here to Infirmary. These tracks embody the Trio's two most effective emotional modes: horror-movie creepiness and chick-flick tearjerking. "Private Eye" plays like a first-person account from a stalker, while "Stupid Kid" is an acrid breakup tune on which Skiba snarls, "Remember when I said I love you? Well, forget it, I take it back."

The group reinstalled these tunes in its set list during a recent three-week stint in Europe, where they were hit singles. The band remains open to playing anything from its career, even the strikingly sappy love songs from Goddamnit ("I wanna wake up naked next to you/Kissing the curve in your clavicle"), depending on fans' demands.

"If you really feel like you're a different band and you're that much better than you were, then you should change your name," Andriano says of the Alkaline Trio's willingness to play old songs, even though the band's sound has changed considerably. "That's a silly stance to take, because you're just going to disappoint people. Your early stuff is what people really attached themselves to. There aren't any songs that we won't play because we don't like them and don't think they're good."

Unlike Green Day, the poster boys for prolonged pop-punk success, Alkaline Trio has evolved glacially, with each album selling a few more copies than its predecessor. Crimson appeared in the Billboard Top 40, while 2003's Good Mourning barely dented the Top 200. With its genuine affection for pristine production and its rebellious-teen-friendly style and sentiments, Alkaline Trio could make a bigger splash with its next release. The seeds for a greater success have already been planted, as the band has graduated to larger festivals like this summer's Leeds and Reading events in England, where Alkaline Trio played in front of 35,000 people at 2 p.m.

"The front row of people is 50 feet away, which throws you off," Andriano says. "But the crowd reaction was pretty amazing, from what I could see. Rocking that many people, that's something I'd like to get used to doing."