The Weather Man's a comedy, but not that kind. 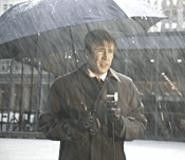 The Weather Man, starring Nicolas Cage as a disappointment of a son and a failure of a father, was screened for critics in the spring, before its April release was pushed to October -- ostensibly to allow for the off chance that Cage or Michael Caine (as Cage's father) might be nominated for Academy Awards. But those who'd seen the movie months ago believed an altogether different reason for its delay: Paramount had absolutely no idea how to sell the thing; it has the dour, dark sensibility of an art-house resident, but the budget of a wide release. Perhaps the studio held up its release in order to better market it -- a theory borne out by the current ad campaign, which pitches The Weather Man as light, wacky, and uplifting. In other words, it's being sold as something for everyone, which is selling it short.

In truth, it's brooding, dark, and contemplative -- a reluctant comedy about failure and fear, about living up to expectations and letting down loved ones, about making things right and doing it all wrong, about trying to fix things beyond repair. There is redemption somewhere in here, even the suggestion that success will not completely elude weatherman Dave Spritz (Cage), but writer Steve Conrad and director Gore Verbinski are less interested in peeks of sunshine than in downpours -- Verbinski, perhaps, as a result of spending so much time at sea shooting Pirates of the Caribbean. Dave may win a few, but he's a loser . . . no, worse. He's a regret in the lives of those who know and have tried to love him: his father, Robert (Caine), a revered author, who set an example to which the son foolishly aspired; his wife, Noreen (Hope Davis), a keeper of a dark secret, who left him for a good man and a better life; his son, Mike (Nicholas Hoult), whose search for a father figure lands him in the lap of a pedophile (Gil Bellows); and his overweight daughter, Shelly (Gemmenne de la Peña), whose prominent "camel toe" has made her a laughingstock among her friends.

Dave knows he's a fraud, an overpaid reader of a TelePrompTer, and he wants only to impress his father, win back his wife, and save his children -- all of which he believes he can accomplish by winning a morning-TV gig on a show hosted by Bryant Gumbel. He thinks he can fix everything, but he's so broken, it's an impossible task. He can't even dodge the fast food hurled at him by passersby who consider him a joke and a phony; his clothes are always dripping something greasy and sticky.

Overplaying downhearted, overselling sadness, has become Cage's act now; the man mopes more than a two-year-old who doesn't get cake and ice cream for dinner. Once a manic maker of light comedy, Cage used to take roles that required him to wear the bright smile of optimism. There were times when he would explode, when his whole body would shudder, his voice would crack, and his eyes would widen like small planets, but his outbursts of rage were tempered by the laugh they were intended to elicit. Now, he seems to have turned entirely inward; the man walks as though his shoes are filled with lead weights, and his outbursts consist of random smiles willed into existence by a guy who appears to no longer believe in them. In Dave Spritz, Cage rolls into the role he's played in such films as Leaving Las Vegas, The Family Man, Adaptation, and Matchstick Men, and finds the perfect balance -- between hope and giving up, between believing it will all work out and knowing it won't, and accepting it nonetheless. Dave, in every scene, is the smallest role Cage has ever played: the below-average man.

Caine, too, is splendid as the father who's ashamed of his son, but holds out hope that he'll be something more. Robert could have been such a villain, an ice machine dispensing blocks of scold, but the filmmakers aren't interested in a bad guy, only in making Dave a better guy. Robert is something to aspire to -- a believer in potential, even in those who don't always exhibit it. He's frank with Dave about Shelly's weight and choice of clothes, not to make her the butt of a joke, but to save her (and, in turn, to save Dave, who is not paying enough attention).

Yep, sure -- Cage and Caine deserve Oscar nominations; so do the kids and Davis, all perfect in a movie about imperfect people trying their best and usually doing their worst. But this is hardly the point. The Weather Man is not the wacky movie Paramount is selling, nor is it cynical Oscar bait. It's just a little movie about little people trying not to get wet or freeze to death or get burned when they walk outside, and good luck with all that.