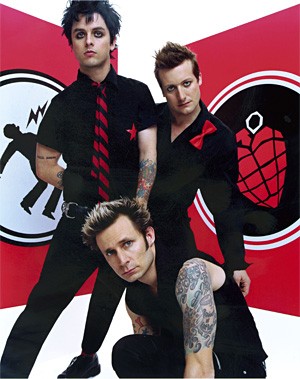 Rock and roll has had a mighty impact on American culture and, consequently, the nation's identity over the past 50-plus years. More often than not, it's intersected with politics and whatever other social unrest has afflicted our country. With Independence Day right around the corner, we celebrate some of the critical musical moments that helped shape — and continue to shape — the very fabric of the U.S.A.

Bill Haley rocks around the clock (1955)
Elvis had already set the rock juggernaut in motion when he released "That's All Right" the year before, but rock and roll entered the mainstream's lexicon in 1955, when Bill Haley & His Comets' "Rock Around the Clock" topped the charts. The song nabbed prominent spots in movies like Blackboard Jungle and American Graffiti, but it became most famous as the theme music of one of America's most beloved and iconic TV shows, Happy Days.

American Bandstand becomes an institution (1957)
In 1957, Philadelphia's Bandstand graduated from regional-TV success story to national phenomenon after it added American to its title. Dick Clark hosted the show every Saturday afternoon until 1989. It was a pop-culture staple, introducing the latest music and fashions to an always-changing country on a weekly basis. Basically, it was the MTV of its day, but without the music videos. Kind of like MTV today.

Elvis gets his draft notice (December 20, 1957)
On March 24, 1958, Elvis became U.S. Army private #53310761, and by October he was carrying out his two-year stint in Germany. As a celebrity, he could have chosen to join the "Special Forces," which would have kept him in the public eye and out of potential danger. But he took his obligation very seriously and served like any other grunt. In 1972, a pill-popping Elvis met with President Nixon and asked to be named a "Federal Agent-at-Large" for the Bureau of Narcotics and Dangerous Drugs. You can't say the King wasn't committed to his country.

Bob Dylan tells the country what's wrong with it (1963)
In 1963, the buzzed-about young folkie released The Freewheelin' Bob Dylan and recorded its follow-up, The Times They Are A-Changin', which came out the following year. Freewheelin's "Masters of War" attacked the military-industrial complex warned of by President Eisenhower and is arguably the most important anti-war song to come out of the era; Times tackled everything from the Civil Rights movement to poverty to job outsourcing. These records reflect Dylan at his most focused and hopeful, and because of them, he was labeled a prophet. Too bad people in power never listen to prophets.

Jimi Hendrix plays "The Star-Spangled Banner" at Woodstock (August 18, 1969)
Easily one of the most historic moments in rock history, Hendrix's feedback-bruised take on the National Anthem fired chords that sounded like machine-gun bullets and whistled like dropping bombs. The performance remains a blistering attack on a government charged with defending the very flag Hendrix was paying haunting tribute to.

Marvin Gaye asks, "What's going on? Seriously, guys, what's going on?" (May 21, 1971)
There's a reason why boomers claim the '60s and '70s produced most of the greatest music of the modern world: The modern world was incredibly fucked up at the time. Gaye, ignoring the objections of his bosses at Motown, made the first R&B album to take on urban unrest, the Vietnam War, and the fallout from the Civil Rights movement. What's Going On's title tune has since become a rallying cry for socially conscious artists the world over.

Pop music tries to save Africa (1985)
The only folks in America who care about the starving people in Africa are college students, Mormon missionaries, and pop stars. In March 1985, an all-star roster of musicians and Dan Aykroyd (seriously, who invited him?) released "We Are the World" in an effort to help feed drought-stricken Ethiopia. Live Aid followed in July with an even more impressive lineup of stars, including a reunited Led Zeppelin. Millions of dollars were raised in concerts held in Philadelphia, the city where the United States was born, and in London, where King George III — whose ass our patriotic forefathers kicked — used to live.

Bill Clinton rocks out on The Arsenio Hall Show (June 3, 1992)
Clinton is often called the first black president of the United States, even though Barack Obama will hopefully claim the title officially in November. Clinton appeared on Arsenio Hall's talk show while he was still a presidential candidate, helping to solidify this image. He also managed to show that he had a little bit of soul by rocking "Heartbreak Hotel" on his saxophone.

Green Day reminds America that rock stars used to have balls (September 21, 2004)
It's not like protest rock had completely vanished from the musicverse by 2004, but it had certainly been a long time since anybody got rich playing it. Green Day changed all that when it released its magnum opus, American Idiot, a rock opera that struggled to make sense of post-9/11 America. Two months later, Americans struggled to make sense of how Dubya managed to get re-elected. By 2006, things were back to normal, and pop music once again became irrelevant.