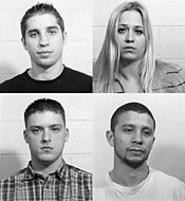 It started as a housewarming party for Lisa Shirey, her roommate, and their new pad in Middleburg Heights. They invited about a dozen people. It was so low-key, Shirey's grandparents even made an appearance.

Then the party swelled. At one point, nearly 50 people filled the yard. An argument erupted, and two large groups faced off. Neither the police nor Shirey know exactly what started the dispute. But at least one punch was thrown, and Shirey, 23, told everyone to get lost. The warring factions left in carloads, one group chasing the other, obscenities flying back and forth. Shirey thought that was it.

Then, an hour later, one of the groups returned. It was almost 4 a.m., and Bob Scott, Shirey's mild-mannered boyfriend, was standing in front of the garage when a caravan of cars pulled up. Scott, 22, had been playing cards most of the night and hadn't been part of the fracas. He was shocked to find some 15 people suddenly charging him, armed with pool cues, golf clubs, and beer bottles.

Scott had no chance. A full 40-ounce bottle, hurled at his head from close range, knocked him out almost immediately. Shirey rushed from the house to find a woman standing over Scott's head, raining down blows with a golf club, she says. A guy was hitting Scott with a pool cue. Another guy was beating him with a billiard ball wrapped in a sock. Shirey threw herself on Scott to make the attackers stop. They fled, leaving Scott unconscious and Shirey covered in his blood.

Scott was in physical therapy for a week and speech therapy for a month. He underwent a second surgery to reinsert a piece of his skull. A thick, hairless scar still arches over his left ear. "He'll probably be on medication for the rest of his life," Funk says.

After dozens of interviews, police arrested four attackers last December, four months after the party. They were charged with attempted murder and felonious assault.

Scott's brutal beating seemed to cry out for hard sentencing. He had done nothing to provoke the attack, Funk says, and the weapons showed premeditation. No one could contest his serious injuries.

But Scott says prosecutors warned him immediately that stiff justice was not ensured. After all, the judge assigned to the case was Ann T. Mannen. "We had been prepped since day one that she was a wimp," Scott says, "that she was going to let them walk."

Joseph Nieves, 22, Gwen Jansen, 20, James Swancer Jr., 20, and Gabriel Kirksey, 22, didn't have a history of violence. Nieves was convicted of breaking and entering the year before. Kirksey had a misdemeanor theft conviction from Kent, according to court records. But for the most part, they looked like normal suburban kids from good families.

Years ago, Kirksey's mother taught Shirey in catechism class. Jansen had been a cheerleader at Midpark High School and president of the school's Family, Career, and Community Leaders of America chapter. She was a full-time student at Kent State, planning a career in journalism.

Yet Funk was certain he had the right people. During an interview with detectives, Nieves quickly ratted out the three others. Witnesses placed specific weapons in each attacker's hands and saw Nieves whipping the beer bottle and Jansen swinging the club.

No one complained about the reduced sentences. After all, no matter how good his witnesses were, Funk believed the near-fatal blows came from the beer bottle and golf club, absolving Swancer and Kirksey of attempted murder. And the charges were still serious. Ohio's sentencing guidelines "presume" judges will sentence those convicted of felonious assault to two to eight years. Judges can go lighter only if they establish that it won't diminish the seriousness of the crime or put the public at risk. Even attempted felonious assault carries up to five years in prison.

Kirksey's sentencing took place prior to those of the other defendants. Scott and Shirey say they weren't informed until after it was over. (The Cuyahoga County Prosecutor's Office, which is charged with notifying victims, was also unaware of the sentencing date, says spokeswoman Kim Kowalski.) Mannen's decision was hardly one the couple supports: Kirksey was given just two years' probation, with the possibility of early release within a year.

Scott and Shirey were ready for the sentencing of Jansen and Swancer on June 3. The couple compiled dozens of statements from friends and family, and made an impassioned plea for prison time. "They tried to murder me," Scott says. "You can't bash someone in the head and expect them to be OK."

But Jansen and Swancer weren't about to go to prison without a fight. Both pleaded for mercy. Jansen's lawyer, David McArtor, submitted a thick packet extolling his client, including photographs and letters from her parents' friends. She was planning to be her sister's maid of honor, the letters noted, and was a devoted caregiver to her autistic brother.

Mannen apparently bought their pleas. She told the two they had bright futures and she didn't want to see one night derail them, Scott and Shirey say. She sentenced Jansen and Swancer to three months' house arrest and five years' probation. She also ordered them to cover Scott's out-of-pocket costs, which he estimates are less than $10,000.

Despite the prosecutor's warnings about Mannen, Scott was upset. "It's a joke. To them, it's no big deal. They're out drinking and having a good time, and I'm taking my pills and see this every day as I'm combing my hair," he says, pointing to the pale scar over his ear. "They don't even think about it, and that's what makes me sick."

Seventy-two percent of aggravated assault convictions are sentenced to jail or prison, according to the U.S. Department of Justice. The average sentence is more than three years. And aggravated assault is only a fourth-degree felony -- a lesser charge than felonious assault. (The Department of Justice does not keep statistics on felonious assault.)

But if prosecutors believe Mannen's sentence is part of a pattern of judicial wimpiness, they aren't willing to confirm it publicly. Spokeswoman Kowalski declined comment on Scott's allegation that prosecutors predicted Mannen would dole out a weak sentence.

Mannen also declined comment, saying judicial ethics prevent her from talking about anything related to the sentence until Nieves pleads and the case is officially closed. And the former assistant prosecutor's reputation seems tough enough -- she earned the Fraternal Order of Police endorsement during her 2000 campaign.

Mark Stanton, who represented Kirksey, paints Scott's beating as the result of a night that spiraled out of control long before the attack: "My client got his nose broken. He was chased by 12 men in two different cars. He could have been killed long before this situation ever took place." Mannen's decision took the whole night into account, he says, and criticism of it is "illegitimate and completely unfair."

Scott and Shirey are pleased by the appeal. They considered a civil suit, but they're not sure it's worth it. None of the defendants are wealthy. Besides, Scott thinks of himself as fortunate. "No matter what happened that night, I got lucky, because I'm alive," he says.

He pauses. A thought crosses his mind. "They're lucky that I'm alive, too," he says.

After all, when the charge is murder, even nice suburban kids with bright futures go to prison. At least most of the time.