Alex Gibney expertly captures the lies and fall of Enron.

May 11, 2005
comment
Enron: The Smartest Guys in the Room Cedar Lee Theatre 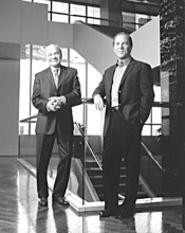 Alex Gibney's Enron: The Smartest Guys in the Room is a thoroughly professional, frequently spectacular piece of muckraking. But any American who hopes to watch this portrait of unfettered corporate greed, cynical power-lust, and outrageous deception without going postal about an hour into the thing would do well to bring tranquilizers. Citizens of Houston are advised to double the dose.

At the risk of being a spoilsport, I feel duty-bound to report on the film's most satisfying moments right here at the outset. The images of former Enron executives Kenneth Lay, Jeffrey Skilling, and Andrew Fastow being hauled into assorted courthouses with their grubby hands cuffed behind their backs may provide scant comfort to the 20,000 Enron employees who lost their jobs and their hard-earned savings in what one lawyer for former Enron workers here calls "the corporate crime of the century." But it's something. If there's any justice in the world, Enron's multimillionaire thieves will now be condemned to spend 15 to 20 painting their former underlings' houses, driving their kids (and grandkids) to school, and cleaning their toilets.

For the primary source material of this exhaustive -- and exhausting -- documentary, Gibney relied on one of the best books to date about the Enron scandal, The Smartest Guys in the Room, by Fortune magazine reporters Bethany McLean and Peter Elkind. On the page, the story of the company's destructive excesses, arrogance, and vast delusion is shocking. On the screen, it's strangely hilarious in places and even more galling than print -- not only because the living, breathing, lying presence of the villains is so odious, but because Gibney (who took a former secretary of state to task in The Trials of Henry Kissinger) has done a lot of additional shoe-leather reporting. On the advice of counsel, neither Lay nor Skilling would submit to interviews, but Gibney has dug up new dirt from previously silent ex-employees (he also thanks his unnamed "Deep Throats" in the closing credits) as well as a fascinating mélange of clips from secret Enron videotapes, phone conversations between Enron traders gleefully manipulating the California energy market amid the rolling blackouts of 2001, and oddities like his view of an Arthur Andersen forklift carting away a ton of shredded Enron financial records.

Gibney is obviously committed to his task, but he avoids both Michael Moore-style recklessness and the revenge motives of, say, the anti-Kerry Swift boat vets. Meticulously researched and scrupulously edited, Smartest Guys takes its shot at the Enron-friendly George Bushes, father and son, but it stops well short of tarring them with the same brush as their old Texas friend "Kenny Boy." It takes pains to point out that, while pervasive, the Enron scandal did not swallow every executive on the ladder. We see that at least one of them, the ill-fated Cliff Baxter, suffered from sufficient pangs of conscience to commit suicide. Just as depressing, Gibney explains in no uncertain terms the complicity of some of America's top banks and brokerage houses -- Chase, Morgan, Merrill Lynch, CitiBank, the list goes on -- in what one skeptical market analyst terms "synergistic corruption." That led, inevitably, to the collapse of Enron's illusory house of cards.

After gazing at the conspirators and getting bombarded by their evasive bullshit for 110 minutes -- a bit too long, if you ask me -- you may feel like heading straight home for a shower. But the hubris of the principals stays with you long afterward -- Skilling's Darwinist biker junkets to Baja and his belligerent defiance before a congressional committee; Lay's outright lies about the health of the failing company and his boastful denials of any wrongdoing whatsoever -- which continued in a later 60 Minutes interview, obviously meant to improve his image in advance of his trial. Once America's seventh-largest company, worth $70 billion, Enron was brought low in steamy, glass-towered Houston by pride, greed, and bookkeeping practices that would startle the Gambino family. But for 15 years, almost everyone believed in the make-believe -- investment bankers, government snoops -- even the prince of money himself, Alan Greenspan, who is seen grinning here as he accepts something called the "Enron Prize for Distinguished Public Service."

In the end, here was Ronald Reagan's "magic of the marketplace" steeped in moral turpitude, the opportunities of government deregulation scornfully debased, the power of comic-book machismo unleashed in a massacre of stockholders. The film holds Enron responsible for the demise of California Governor Gray Davis and the subsequent election of Arnold Schwarzenegger, which may or may not be a legitimate claim. But the film's underlying message certainly is. It's scoundrel time not only in Houston; most of U.S. corporate culture is under siege by manipulators and crooks, and if we're not careful, American capitalism itself is in danger of losing not just its "magic," but its entire mission. Do game-fixers like Ken Lay, the Gordon Gekko of his time, reign triumphant over American big business? Or is our conscience equal to our profit motive?

Part financial thriller, part casebook in chicanery, part black comedy, Smartest Guys is the deepest, darkest kind of cautionary tale. It warns us not only about the dirty fuel that can get inside the economic engine of the most powerful nation on earth, but about how that nation just might lose its soul. Here's required viewing for all MBAs, CEOs, and CFOs -- and for every gullible investor who threw a paycheck at a sure thing.