Wes Anderson takes Bill Murray out to sea and strands him there. 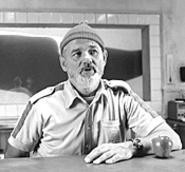 The critic who takes notes during The Life Aquatic With Steve Zissou will ultimately fill a notepad only with scribbled details: "All the crewmen wear red stocking caps with their tuxedos," "some names of Zissou's movies: The Battling Eels of Antibes, Shadow Creatures of the Lurisia Archipelago, Island Cats!," "One crewman does nothing more than perform Portuguese versions of David Bowie songs," "The script girl never wears a top," "There's a Zissou pinball machine on board the ship, cute." By the time the movie's over, about two hours later -- though it feels days longer -- the pad is crammed with such minutiae, with only scant lines of memorable or meaningful dialogue jotted down and even fewer mentions of plot points worth pointing out. But such are the whims and quirks of director and writer Wes Anderson: He crams his movies with fanciful touches, including stop-motion animated sea creatures fashioned by The Nightmare Before Christmas director Henry Selick, laid upon an emotionally barren landscape. Increasingly, his movies are wondrous to look at -- like children's pop-up books built on soundstages -- but ponderous to listen to, as characters talk at each other without ever addressing one another like real people. Anderson puts more effort into the sets than into the characters wandering around inside them.

The Life Aquatic is doubly troublesome because it plays like a wan, withdrawn redo of his previous film, The Royal Tenenbaums, co-written with Owen Wilson, who is now relegated to the role of co-star. (Noah Baumbach, writer and director of Kicking and Screaming and Mr. Jealousy, has taken his place; the dry, distancing result suggests that, dating back to their 1996 mini-masterpiece Bottle Rocket, Wilson may have been the heart, if not the brains, of the organization.) As did its predecessor, The Life Aquatic concerns an egocentric father figure married to a character played by Anjelica Huston, and swaps one Silverado star in love with Huston (Danny Glover) for another (Jeff Goldblum, here playing the main rival to Bill Murray's Steve Zissou). In Tenenbaums, though, Gene Hackman fought through the wry cleverness of the screenplay to bring warmth and depth and humor to the character of Royal. Amid the caricatures and curios filling the Tenenbaums' Manhattan manse, Hackman was a most welcome figure of humanity, hot-blooded in a movie that often felt cold to the touch.

Murray, as the ocean explorer who's run out of adventures, is no Hackman -- and here, he's barely a man at all; he frumps and frowns his way through a journey that's entirely interior, despite its exquisite exteriors. Steve Zissou is nearly as curmudgeonly as Royal, a crank who acts heroic only when he's in harm's way (when, for instance, his ship is hijacked by Filipino pirates) and is honest only when he's run out of lies. He's a homophobe, where Royal was a racist (referring to a man he loathes as a "slick faggot" and a pregnant woman as a "bull dyke"), a similarly lousy dad (Owen Wilson's Ned might be Steve's son, whom he's known about, but never sought out), and an envious son of a bitch out to sabotage a burgeoning romance between Ned and Cate Blanchett, who plays a pregnant magazine reporter sent to cover Team Zissou's final mission. Steve, his eyes perpetually bloodshot either from salt water or pot, is almost irredeemable, save for the fact that he's played by Bill Murray, who manages to be lovable even when loathsome.

At the heart of the movie is Steve's desire to seek revenge upon the rare breed of shark that has killed his old friend and mentor, Esteban (a baldpated Seymour Cassel); its existence would be considered a scientific find, which doesn't trouble the supposed scientist out to slay the beast. (Perhaps Anderson should have titled this Moby Prick.) But the journey upon which Steve and his crew -- including Willem Dafoe as former bus driver Klaus ("calm, collected, German") and Noah Taylor as Wolodarsky, a former substitute high school teacher ("physicist, score composer") -- embark is more a series of detours than an adventure. For Anderson, though, it's always about what happens in the margins, rather than in the story itself; he's a footnotes man, the cinematic equivalent of authors David Foster Wallace and Dave Eggers, whose cutesy obsession with the fine print so distracts from the main action that you're tempted just to put down their books and slowly back away from them.

What's most troubling and puzzling about Anderson is how lifeless his movies are becoming, even as they turn pretty as paintings. Bottle Rocket, Rushmore, Tenenbaums, and The Life Aquatic deal with the very same thing: a troubled outcast seeking a father figure, who usually becomes an adversary before some kind of reconciliation. But the rookie exuberance of the Owen Wilson-James Caan relationship in Bottle Rocket or the touching volatility of the Jason Schwartzman-Bill Murray rivalry in the wondrous Rushmore dissipates with each subsequent movie. Murray's forced to say out loud, "I hate fathers, and I never wanted to be one" -- what his predecessors didn't have to, but Anderson doesn't want us to miss the point now, even as he forces our attentions and affections to wander. The more technically proficient Anderson gets as a filmmaker, the more emotionally barren his movies become, till at last The Life Aquatic drowns in a sea of self-indulgent touches that delight the filmmaker, but distance the filmgoer -- who wants to love the director and his characters, but just can't. Not anymore.