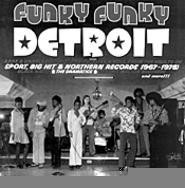 History is written by the victors or, in the case of pop-music history, by the people who heard the victors. We know the hits, and we know the records that sold terribly at the time but became influential later on. It's interesting, however, to look between the cracks of history and see what could have been big -- with just a little bit of luck or money at the right time.

Soul music was big business in the early 1970s, but it was still small enough that anybody with a couple grand and a car trunk could put out a 45 and hope to be the next Berry Gordy. That few enough of these entrepreneurs of funk ever hit the big time is no slant on the quality of the records released. Collectors have scoured estate sales for decades, looking for rarities that most of us never dreamed existed. In today's ever-improving CD-reissue market, there are more and more opportunities for the less obsessive among us to hear what we've been missing. Three excellent recent compilations of coulda-shoulda-wouldas have recently been released, letting those of us who don't dig through stacks of vinyl get a glimpse at an alternate universe in which funk rules the world.

Detroit was the epicenter of soul and funk and rock and racial tension in the late '60s. There was Motown Records, the Sound of Young America; there was George Clinton putting together his Parliament/Funkadelic kingdom; there were the Stooges, the Amboy Dukes, the young Bob Seger, Mitch Ryder and the MC5 mashing up blues, soul, and rock and roll into one frantic explosion of aggressive garage power -- and there were the bloodiest riots this side of Watts.

Well, that's the history we know, of course. But in the margins, walking the same streets and soaking up the same concepts, musicians played clubs and made records without ever becoming famous or influencing trends. This compilation draws mostly from the output of two labels, Northern Recording Company and Big Hit, both owned by one Johnnie Mae Matthews.

In the late '60s, Matthews recorded artists who desperately wanted to be on Motown, to judge by the sound and style of their releases. Lynn Day could have been a Temptation if he'd been around on a day that they needed him; his vocals were that authoritative. The Dynamic Walton Brothers clearly followed the Junior Walker & the All-Stars template. And the Dramatics' song "Don't Leave Me to Be Lonely" might as well have been titled "We'd Really Loved to Have Done Ain't Too Proud to Beg."

By about 1970, though, Matthews was banking largely on a band of young players built around her son and daughter, Art and Kaiya. Black Nasty was soaking up influences from everywhere -- rock, funk, soul, gospel -- and spinning them around until they came out as a deep, insistently jabbering, syncopated splatter of sound. They backed up most of the singers Matthews brought in -- Herbie Thompson and Little Daddy Walton, especially -- and released their own records as well. Many of these sound today as if they would have fit right in with early Funkadelic; there was studio experimentation with reverb and a tightening-up of the rhythm section, mixing the percussion instruments louder than the horns and guitars. One of the guitarists in Black Nasty also had a neat, rock-inflected, liquid approach that set the band's grooves apart from the pack.

The big difference between Detroit R&B and Chicago R&B is that in Detroit, the musicians moonlighted playing jazz, and in Chicago, they doubled up on the blues circuit. Thus you get fewer fancy harmonic changes and a lot more open space in the soul and funk from the Windy City. Funky Funky Chicago offers 16 examples of obscure gems that must have blasted in many a local bar on the South Side back in the mid-'70s.

At the time, blues had fallen into disfavor with most younger African Americans, which paradoxically helped make the period one of the most fertile and creative for the people who still played it. Not only did they tighten up the rhythm section and add punchier, slicker riffs to their repertoire on the blues numbers, but they brought their blues essence to the music marketed to the younger set. So we get Artie "Blues Boy" White slipping in some down-home resonance amid the Isaac Hayes-styled funk of "A Love Like Yours (Is Hard to Find)." Then there's the smoky, bar-fueled groove of Mack Simmons & Jimmy Mitchell on the dance number "43 Street Bus Stop." And best of all, there are four slippery instrumentals from Jimmy Johnson & the Lucky Hearts, which find the guitarist Johnson (older brother of soul singer Syl Johnson, by the way) exploring blues licks in a soul context.

Of course, if you know anything about soul, you've heard music from Chicago and Detroit before. It's much less likely that you're very familiar with the early '70s scene in Columbus. It turns out, as documented on this amazing release from the brand-new Numerogroup label, we've all been missing some of the most vibrant soul of the time.

Bill Moss was and is a successful disc jockey who eventually became a longtime school-board member and a losing candidate for mayor of Cow Town. For a short period, though, he attempted to combine a recording career of his own with running an independent label. There's not a lot of information as to how they did it, but virtually every 45 to come out on Capsoul -- short for Capitol City Soul -- was terrific.

Pulling influences from all over -- Motown's rhythmic drive and harmonic sophistication, some Memphis grooves and Sam & Dave-style vocals, a bit of slick Philadelphia technique on the arrangements -- the various artists who passed through Moss's domain were uniformly vibrant and exciting. Ronnie Taylor was a majestic, deep-voiced singer in the vein of James Carr; the Four Mints were a thoroughly enjoyable quartet of singers who could have given the O'Jays a run for their money; and Johnson, Hawkins, Tatum & Durr were capable of holding their own with the Temptations.

Given a level playing field, which the record industry has rarely offered anyone, Moss could have forged an empire out of these tracks. But for the usual reasons -- poor distribution, lack of payola for radio play, ego trips -- that was not to be. Don't let the title scare you; the only reason this music isn't called "Essential" is that not enough people got to hear it when it was new. This is the soul reissue of the year, making us nostalgic for what we never had a chance to love the first time.