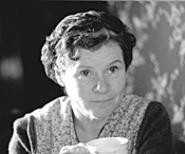 How does Mike Leigh do it? The years pass, film fashions come and go, Hollywood churns its commercial pap. Careers sparkle, others fizz; whom the gods would destroy, they first make famous. Meanwhile, over in England, Leigh makes his films, tracking the intricacies of the lower-class family with the patience of a man cutting diamonds. So what gives? He must know he has something good on his hands.

With Vera Drake, his latest film, Leigh skirts a new, dangerous arena -- the morality play. The movie is about family, sure enough, and about the differences between the happy and the sad varieties. But the story, which takes place in 1950, involves a woman who performs illegal abortions. That's quite a load to carry, for the woman and the movie. When Vera Drake falters -- which it rarely does -- it wobbles on this chink: that, at least at moments, the politics of its writer-director are rendered too explicitly, robbing the characters of some of their humanity and cracking the illusion that the film has otherwise rendered with exquisite care.

It isn't fair to mention these small faults at the top of a review, because the film is a gem. Vera Drake is so patient, assiduous, and attentive to emotional accuracy that it betrays the utter sloth of most of what we see when we go to the movies. Leigh's writing is at its finest, and the acting is so solid as to be invisible. As writer and director, Leigh invents a completed world, locating the universal in the very precision of the local. And his compassion for people of both sexes, any class, and any race is truly refreshing. It's little wonder that Leigh earned Oscar nods for both direction and screenplay.

As the film opens, the fiftyish Vera Drake (Imelda Staunton, also nominated for Best Actress) returns from an errand, mounting the steps to her gloomy set of rooms with unaccountable cheer. We meet her family: kind husband (Phil Davis), awkward daughter (Alex Kelly), and spirited son (Daniel Mays). Her children are young adults; we understand that they live at home because the family is poor and because it is 1950 in England, when children did not leave home until they married. In the next few minutes, Leigh paints a portrait of a happy family, four people sharing dinner in amiable companionship. They like each other, and that is enough for them.

As the film unfolds, we meet another family, or part of it: a rich woman whose mansion Vera cleans and Susan (Sally Hawkins), the woman's daughter. When Susan tells her mother that she has a date, the response is icy: "You're looking very flat-chested." In short order, Susan's date rapes her and leaves her pregnant. (Leigh is never afraid to make a bad situation worse.) So what to do?

Susan's story runs parallel to the central plot, which belongs to Vera. Vera is not merely a domestic; when her workday is finished, she meets urgent women in squalid apartments and performs an act that she refers to as "helping young girls out." Using a rubber syringe, Vera injects a solution of soap, disinfectant, and hot water into the girls' vaginas, with the aim of inducing miscarriage -- though Vera never says that word, just as she never says "abortion." She performs her work with a light efficiency that calms some girls and fails to comfort others. Either way, Vera scarcely notices. She inhabits a brand of benign denial that feels both right for her task and vaguely alarming. And indeed, doesn't she always leave before the difficulty begins? Apparently, a day or two after the procedure, the young woman feels "a pain down there" and begins to bleed. Vera never sees it.

Secrets must out, and the film takes its turn toward high drama exactly halfway through, when the police show up at the Drakes' apartment to question Vera. From then on, everything rolls downhill, which should not surprise viewers but does, perhaps because so few films are willing to allow the course of events to go entirely to shit. The lengthy denouement may be too maudlin for some audiences, as the misery is plentiful; the fierce loyalty of Vera's husband might strike others as slightly absurd. But what comes through is a great deal of emotional truth, particularly in Vera's case. As events progress, we learn just how unable she has been to face the dark side of her work; then, as she is forced to confront it, we watch her break down under its weight.

Susan's story has a happier ending, one that is responsible for the most chilling edit in recent cinema. In a film where nearly every character is burdened by what she can't say, Susan almost speaks. There is a moment, as she is sitting with her mother, when her mouth quivers on the verge of revelation. But the camera cuts away, and all is silence.

The juxtaposition of rich and poor is a bit programmatic and ultimately moralistic. (Translation: Anti-abortion laws are bad and hurt the poor.) But Leigh's actors rise above it. In particular, Staunton's Vera is magnificent, a little bundle of English cheer concealing a gaping wound. The second half of the film calls for a virtuoso performance, and she delivers it.