Gary Hardwick fails to Deliver Us From mediocre comedies. 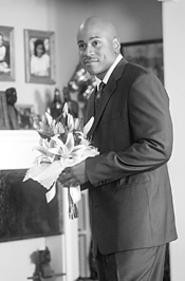 Director Gary Hardwick's first film, The Brothers, was a refreshing take on the single-black-man romantic comedy, offering a surprisingly mature perspective full of depth and well-rounded characters, without resorting to the time-honored stereotypes of black man as player and black woman as ball-busting bitch. Hardwick wrote the script himself, and it rang so true that it undoubtedly had many autobiographical elements to it.

With his second film, Deliver Us From Eva, Hardwick tries for broader comedy and falls flat on his face. Not that there aren't funny moments in the film, but they're cobbled together so awkwardly that you'd never suspect the director had made a film before, much less had four novels published, one of which gets conspicuous product-placement time onscreen. True, he didn't actually come up with the story this time (though he did a rewrite), but it's still his obligation to tell it in a compelling fashion, and it's an obligation he flubs.

The movie begins badly, with an awkward retro-Soul-Train-style lip-sync number. From there, we're visually taken inside a storybook and wind up at the funeral of Ray Adams (LL Cool J or, as he's billed herein, "James Todd Smith a.k.a. LL Cool J"). Adams narrates -- for this opening scene, at least -- introducing us to the principal characters, all of whom, he tells us, are responsible for his demise, especially the titular Eva (Gabrielle Union).

Flash back to the beginning, which includes scenes that Ray could not have been present at, thus invalidating his narration, unless the point is that he's an unreliable narrator, but that's doubtful -- the movie isn't sophisticated enough for such concepts. Three best friends, each painted in broad strokes, are having romantic problems: Tim (Mel Jackson) is a passive guy -- with glasses! -- who wants to have a baby, despite the misgivings of his wife Kareenah (Essence Atkins); Darrell (Dartanyan Edmonds) is a wisecracking fellow with cornrowed hair, who's dating college student Jacqui (Meagan Good), a girl who'd rather study than have sex; and Mike (Duane Martin) is a passive-aggressive policeman whose new age girlfriend Bethany (Robinne Lee) will put out, but won't actually let him stay over unless he proposes.

All these problems, however, seem to stem from the same source -- the three women in question are sisters, with a fourth sibling who dominates their lives and commands their attention. That would be Eva, a ferocious feminist, who delights in making withering tirades about male inferiority while comparing herself to Nelson Mandela and Martin Luther King Jr. She also likes to spew facts and figures that she read in some book somewhere, once upon a time, thus making her the worst combination of nerd and bully. One character says of her that "Eva's sisters gave her a cross with Jesus on it for her birthday -- the next day, Jesus was gone!"

There are lots of little idiosyncrasies to embellish her major traits, such as the fact that she keeps her many pairs of shoes in the original shoeboxes, her favorite flowers are lilies, and her job -- eminently suitable for someone so anal-retentive -- is that of health inspector. Naturally, she wears her hair in a ponytail, which for some reason is a hallmark of what Not Another Teen Movie dubbed "the pretty ugly girl."

Taking a cue from Shakespeare's Taming of the Shrew -- or, more likely, the cinematic CliffsNotes version, 10 Things I Hate About You -- the henpecked hubby and would-be hubbies decide that Eva would stop interfering so much in her sisters' lives if she got laid, or as Darrell more colorfully puts it, "What she needs is a dude who can hit that ass till she starts speaking in tongues." That dude would be Ray, fully earning his "Ladies Love Cool James" hip-hop acronym. Ray is a consummate player, able to persuade two rivals for his affection that they should have a threesome instead of fighting, and for $5,000 he agrees to try to permeate Eva's extra-hard heart.

Then the focus shifts completely. The three browbeaten guys -- with whom thus far we have been asked to sympathize --start to become shrill caricatures, as Ray really begins to fall for Eva and Eva starts to let down her guard. It may seem like a deft move for a director to switch our sympathies so suddenly, but it puts little stake in the outcome if the three couples whose futures depend on Eva suddenly become disposable. Additionally lowering the stakes is the fact that Eva knows early on that she's being fixed up with Ray. She doesn't know there's money involved, but that seems like a comparatively minor detail.

Compounding the problem is director Hardwick's lack of visual style, which was less a problem in The Brothers, because there was more substance there. There's one impressive Steadicam shot through a dance floor in this film, and it stands out by being the only shot with any style. The humor also lacks flair at times -- Eva's first true love, for example, is named Lucius Johnson (huh-huh), and studly Ray is a meat delivery man by profession (settle down, Beavis!). There are a few good laughs in there, but certainly not enough worthy of your hard-earned movie dollars.