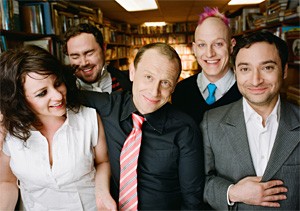 Their name might seem more appropriate than presumptuous these days, but the Canadian indie-rockers of Stars clearly didn't put much thought into search-engine accessibility when they selected their moniker. If you typed "Stars" into Google a month or so ago, you'd find more info about constellations and Dallas hockey teams than Montreal pop bands.

But things have changed since then. The band's plan might have been to remain enigmatic: Whether you're looking for its MySpace page or trying to wrap your head around the tangle of personal and political conflict in its songs, Stars demands a little more attention than your average '80s revivalists. But the group's gotten more of it than it bargained for lately, following in the footsteps of labelmates and fellow countrymen Broken Social Scene and Feist by converting tons of fans and packing auditoriums across the globe along the way.

It's a level of success that's been well deserved for Stars' frontwoman Amy Millan. In the middle of a sold-out Australian tour, she still seems in awe of it all. "I never, ever get used to it," she says. "When there are people in the audience singing the songs and spending their hard-earned cash on coming to see us, I am blown away. It feels like a dream."

Millan, 34, is a Toronto native who spent the better part of a decade trying to find her niche in the music biz. The journey took her to Los Angeles for a spell, when she was in her early twenties, but it wasn't until she returned home to Canada that things started to fall into place.

In Montreal, she fell in with a community of musicians who would soon be influencing the sound of indie-rock the world over — though it was hardly a case of overnight rags to riches. "We had many empty shows and years of empty pockets," says Millan. "But we had all these bands — Metric, the Dears, Broken Social Scene — all fighting the same fight. We would go lay in the park, drink cheap wine, and find someone cute to make out with."

Millan is still a member of the Broken Social Scene family, which has seemingly engulfed most of Quebec at this point. But she didn't truly shine until singer Torquil Campbell and keyboardist Chris Seligman asked her to join Stars in 2001. Her role has steadily grown over the band's four albums, as she's become a dynamic lead singer and a perfect foil for Campbell's melodramatic Morrissey croon.

"They are my family and my best friends," says Millan of her Stars bandmates, who also include bassist Evan Cranley and drummer Pat McGee. "I knew from our first rehearsal it was a special chemistry among us, and I feel very lucky that this group of people has had so much faith in me and my work. That can be hard to find. We know how to fight, which is one of the reasons we're still a band. And we also know how to party."

It's safe to assume the parties have become a little more lavish in recent years — as have Stars' lushly colored studio productions. Last year, the group followed up its acclaimed 2005 CD, Set Yourself on Fire, with the dramatic, theatrical In Our Bedroom After the War, which has notched indie hits with the infectious anthem "The Night Starts Here" and the Moz-like rocker "Take Me to the Riot."

"It is the most ambitious record we've done," says Millan. "If you listen to Heart [from 2003], we didn't have the budget we did for In Our Bedroom. But songs like 'Time Can Never Kill the True Heart' were hugely ambitious, and we only had one mic to record everything. Sometimes, throwing money at something can make it sound bigger, but we always wanted to achieve that kind of sound — even when we had no money."

Still, In Our Bedroom is a complex record and one rooted in its studio tools. Don't expect Stars to replicate it note-for-note onstage. "We approach the songs from scratch when putting together a show," says Millan. "They aren't going to sound exactly like the record, but that's a good thing. Why pay money to come see it live if it sounds exactly as it would on your couch? We exude a lot more energy than we do on record. It's a celebration of all the hard work in the studio."

While Stars' music ties in to the free-spirited type of introspection that made legends of the Smiths, Millan is the magic bullet that gives the band its style. She is the songwriter and voice behind some of Stars' best songs — including "Elevator Love Letter" and "Ageless Beauty" — and her ability to shift from punk spunk to jazzy seduction has netted comparisons to two of her Broken Social Scene sisters, Emily Haines (who also sings in Metric) and Feist.

"I remember meeting Leslie [Feist], working at a bar in downtown Toronto," recalls Millan. "She had just self-released her record and wanted to know what to do next. That was 10 years ago. What she did was work her ass off. She played and wrote and played and wrote. And now she is playing arenas."

Feist is the undisputed queen of Canadian indie-rock right now, and her career arc parallels that of her friends Millan and Haines. All three have split their time between bands and solo projects — Millan released a well-received country-folk album, Honey From the Tombs, in 2006. Most important, they all remain close. And at times, says Millan, they can be a little competitive. "But it's good for us," she laughs. "It makes us work harder. Before anyone knew about our bands, we were writing for each other.

"In the end, when things go well for someone — like Feist's four Grammy nods — we are proud. When things aren't going well for someone, we worry for them. The pride I carry is for my friends. I am amazed that this crew of gangly teenagers, who grew up together, who wanted to travel the world playing music, has found people out there who support it."