Sunday, May 25, at Time Warner Cable Amphitheater at Tower City. 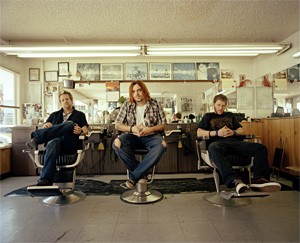 Seether's 2005 hit, "Remedy," proved that the South African rockers have a sharper knack for melody than most of their mainstream-rock associates. But any deviation from the Post-Grunge Guide to Success stops there. Like Staind, Three Days Grace, and countless other groups clogging the toilet that radio has become, Seether has followed four basic steps toward airplay domination: 1) Feast off the carcasses of defunct grunge legends. How do you know that frontman Shaun Morgan's all-time-favorite band is Nirvana? He's covered the Seattle legends, got Kurt Cobain's howling rasp down pat, and even dyed his hair red — just like In Utero-era Cobain. 2) Emasculate metal riffs. Seether distills guitar chords until they're a processed chug that's soft enough for radio, but hard enough to ignite pits. 3) Pen angst-laden lyrics with simple end rhymes. 4) Know the value of a cheesy rock ballad. Seether's 2002 single "Fine Again" may have been the band's first single, but the group didn't really take off until it recorded the sappy "Broken" — a duet with Evanescence's Amy Lee — two years later.