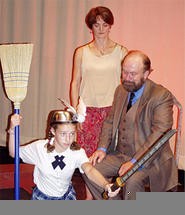 Nostalgia is like the dry cleaner of the mind: All kinds of memories enter all the time, but over time, human lust for nostalgia focuses the mind on the ice-cream cones Dad bought, not the times he passed out drunk on the La-Z-Boy.

Memories are thus very unreliable things -- a point pounded home in The Magic Fire by Lillian Groag, now at the Ensemble Theatre. The cast, featuring several of the more accomplished actors in the area, solidly creates a range of eccentric and likable characters in one extended family. But the effect is undercut by excessive talking and direction that muddles more often than it clarifies. And that's too bad, because the playwright clearly has insightful observations about culture, art, governmental and familial politics, and how they all intertwine.

The play revolves around Lise, a middle-aged immigrant living in the U.S. She addresses the audience directly, telling stories about her coterie of aunts, uncles, and other assorted folk who wended their way through the family's home in Argentina. She is recalling the summer of 1952, when she was a young girl and Eva and Juan Perón were running her country,

Lise's parents are refugees from Europe: Her opera-loving father Otto Berg escaped Austria, which was in the grip of the Nazis, while the blood relatives of her mother Amalia (Carla Petroski), the Guarneri clan, left Italy before the turn of the century. The atmosphere in Buenos Aires is a fascinating mix of high culture (in the form of music and dance) and political unrest, with the Peróns having installed a repressive regime after starting out as populists.

Otto strives to build a pleasant, private life for his family, using his favorite Wagner music to create a shield behind which his loved ones can live in peace. But reality keeps intruding. Lise's Aunt Elena (Valerie Young) is an actor who can't get work because she won't kowtow to the government. Lise's 98-year-old grandmother, affectionately referred to as Nonna, rapid-fires strong opinions about Mussolini and everything else that crosses her path.

Eventually, a threat to their safety emerges: The housekeeper's strike-fomenting brother Santo, who remains unseen offstage, takes shelter in the apartment's back rooms, hiding from the searching police. His cause is championed by a family friend, Alberto (Peter Ferry), who runs a local newspaper opposed to the Peróns. But another family friend, the suspicious Henri (Paul Floriano), is an officer in the government and not clearly on the family's side.

Older Lise is always on stage as these memory scenes play out. At times, she tries to wrestle her recollections into some order, insisting that the proceedings aren't developing as she remembered them. But that's memory for you. As Lise, Pandora Robertson is a bit overly mannered, cluttering her characterization with many half-finished gestures and head turns, which are apparently meant to convey her memory at work. (The role of young Lise is shared by Sarah DiGirolamo and Camille Rekhson.)

Much of the humor in the piece -- there are a surprising number of laughs -- come from Lee Mackey as feisty Nonna ("I wasn't born pissed off. I got pissed off later."), who can turn an ordinary sentence into a course in comic timing. Annie Kitral is also frequently funny as Paula, who orders her tea "with hemlock" and offers some trenchant comments: "Dullness is so often confused with sanity."

As Otto, Robert Hawkes provides a stable center for these sometimes overwritten scenes. We feel his anxiety as it becomes clear the insulated world he's trying to create for his family is dissolving around them. But there are several loose threads that are left dangling, including a gratuitous revelation of Alberto's homosexuality, a shaggy-dog ending to the search for Santo, and a less-than-crisp resolution of Henri's real motivations.

Running almost three hours, with two intermissions, Fire is a long and ambitious excursion that has many bright moments. But it ultimately fails to shed new light on the complex topics it raises. In the end, you'll remember what you saw, but don't be surprised if your memory pretties it up some.