Will Jamaica's biggest dancehall star shoot off his mouth in America? 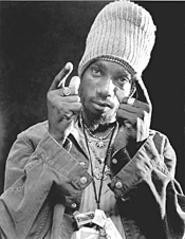 There are artists you'll hear described as a "publicist's dream." And then there's Sizzla.

That's not to imply that Sizzla Kalonji, a dancehall legend dubbed "The King" in his native Jamaica, is rude, reluctant to answer questions, or flaky. In fact, he's very much the opposite: polite, thoughtful, and as open as you could wish. And he has a reputation for being one of the island's most conscious -- and conscientious -- performers, railing Marley-style against social injustice and speaking on behalf of the poor, through rootsy anthems like "Black Woman & Child."

But it's hard not to wonder how his conquest of America -- already under way, thanks to "Come Fly With Me," a sizzling hip-hop duet with Foxy Brown -- will be affected by the controversy that has followed him at least since 1998, when he reportedly told a stadium full of fans to "Burn all white people in Jamaica."

Last year, gay-rights groups pressured Sizzla to cancel a short tour of the U.K. in protest of his anti-homosexual lyrics. And as the 29-year-old vocalist prepares for an American jaunt to mark his recent signing with hip-hop impresario Damon Dash's new imprint -- and set the stage for the first major-label album of his career, due in 2006 -- it's worth asking whether demonstrations await. After all, gay activists were also successful last year in getting stateside venues to cancel gigs by similarly controversial reggae stars Beenie Man and Capleton.

Of course, Jamaican artists expressing extreme disapproval of "batty boys" and "fifi men" is nothing new. But in one of those strange cases of reverse political correctness common in the music industry -- and to this topic in particular -- the former Miguel Collins is seldom asked to defend his beliefs. Which is funny, because he's more than willing to do so.

"The truth is the truth," he continues. "There's certain t'ings in the world that are not biblically accepted. So I got to sing those songs. Those songs is kinda like a spiritual shield, y'know?"

Sizzla makes no apology for his anti-gay lyrics, but notes, "It don't always have to be harsh. Sometime it can just be like a little nursery rhyme," he says, offering in singsong, "'No no no do it/Because it's wrong/We go and read de Bible/And continue Jah song.' Just to remind people."

"But some people," Sizzla adds, "need the song a bit harsher."

That, presumably, is why he's penned tunes like "Pump Up" -- which boasts, "Shot batty boy, me big gun boom." Such songs became the focal point of the successful British protests against Sizzla last year, when activists convinced the government that the lyrics constituted incitements to violence against homosexuals. But despite rumors that he planned to pull some songs from his set, Sizzla insists that no tune is off-limits -- although he does admit to sometimes turning down requests: "People punch me like a jukebox," he says. "They say, 'Sing that one!' And sometimes I say, 'Nah, that one too rude. Next!'"

It isn't just gays who have taken umbrage at Sizzla's oeuvre, however. Did he really tell a crowd at Montego Bay to burn all Jamaica's whites?

"Yeah, I said burn all de white people," he says without hesitation. "But I didn't mean burn dem in de physical sense, I mean in de spiritual sense."

Raised in a devoutly Rastafarian household in Kingston's August Town, Sizzla became interested in the religion's Bobo Ashanti sect (one of the "Mansions of Rastafari," like Nyabinghi and the Twelve Tribes of Israel). Clad in turbans and robes, the Bobos worship a Holy Trinity of Haile Selassie, Marcus Garvey, and Bobo founder Prince Emmanuel (aka Charles Edwards).

The Bobos also have a particular interest in black repatriation to Africa, and Sizzla insists that his call to burn whites -- similar to Rastas' common battle cry "Fire to Babylon!" -- represents the hope that they will undergo a spiritual transformation. "We came here in slavery. And you beat us to keep us. That's not right," Sizzla says. "You need to move me and bring me roun'."

It's not hard to see how that wish might have been taken the wrong way, but Sizzla has a more direct response to conscious reggae fans unhappy that his recent work indulges in X-rated "slackness" (like a raunchy freestyle available at www.dashmusicgroup.com).

"The best way I can appeal to de people is just to be myself. I don't really work to please others, I work to please God," he says. "If I sing something about a woman, intimate things about her -- we all have sex. That's true. I got to put that in lyrics, and sing praise about it.

"Now what I sing about a woman might be harsh," he continues, "but when I look again at de government, legalizing man and man to get married, then I think nothing is wrong with my song then!"

Sizzla doesn't seem to mind if his views result in some angry rebukes. When asked about potential protests against him on his upcoming tour, his response, mild as it is, still sounds a lot like "Bring it on."

"They come out and declare what they declare, and that's their right," he says. "This is not my land, this is their land. But I have the right to speak. This is their world, but this is my world too."