The Chef's Tasting Menu at Lola is a religious experience all its own.

* Chef’s tastings can be arranged, in various price ranges, by advanced reservation. 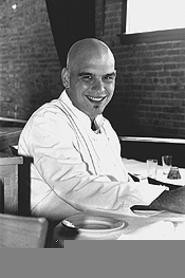 It's a flawed and blemished world we're living in: a world where water mains blow up, cars break down, and spouses turn into strangers overnight. Amid the daily chaos and commotion, the disappointments and disasters, what could be more comforting than a few hours spent in a cozy realm where absolute perfection reigns as the natural order?

"Ah, yes," you say, "but where can such happiness be found?" Why, as Dorothy from Kansas discovered more than a half-century ago, it's right in your own back yard -- you lucky Clevelander, you -- at the comfortably exotic Lola.

Chef-owner Michael Symon, an irrepressibly boyish charmer whose rugged good looks belie his extraordinarily tender touch, is gaining recognition daily as one of a handful of national culinary superstars. A friend and spiritual confrere of the country's reputed top chef, The French Laundry's Thomas Keller, locally born and bred Symon is becoming something of a regular on the Food Network, and his work has caught the eye of reviewers for such publications as Bon Appetit, The Wine Spectator, Food and Wine Magazine, and The New York Times.

As with any fine art, it's hard to distill into words exactly what makes Symon's cooking so remarkable. After all, top-shelf ingredients and skillful preparation are no longer rare in area restaurants. To these essentials, however, Symon adds an uncommon capacity to develop unusual but perfectly compatible flavor and textural combos -- say, crispy sea bass on a bed of artichokes and cardoons, kissed with truffle butter -- that bathe the senses in small explosions of aroma and flavor. This is, indeed, food so good, so surprising, yet so right, that a thoughtful diner must simply shut his or her eyes and let the sensation of each mouthful wash across the palate like a small orgasm.

Symon's menu changes frequently, although certain standards, like Coriander-Crusted Tuna and Slash-and-Burn Grouper, reappear regularly, the result of popular demand. And while the menu selections hardly shortchange his skills, what, we wondered, could Symon do if released from its constraints?

To find out, and to enjoy his work at its most liberated, we opted to have Symon create a Chef's Tasting Menu for our party of four -- a dining alternative available to any party that has made arrangements in advance. In secret negotiations with Symon's partner and wife, Liz, we decided upon a $60 per person price tag for the evening's feast (less expensive options were also available) and gave him free rein to wow us with any creations he cared to devise. Our reservations were confirmed under a fictitious name, and Liz -- an enthusiastic partner in our little deception -- swore to keep our identity a secret.

Like Symon's food, the dimly lit restaurant is an exciting swirl of classic and modern elements. Its three cozy dining areas include a handful of prime tables on a raised platform with a direct view into Symon's open kitchen, a few tall tables near the bustling candlelit bar, and another cluster of seats in a narrow space defined by a roughly plastered wall the color of hot paprika. All tables are topped with candles and white linens, while soft overhead lighting comes from distinctive lamps shaded with long stretches of what appears to be lacquered cheesecloth.

Our dinner began with white Asian-style bowls filled with piquant Egg-Drop Soup: a pale lemony broth based on lobster stock, with a chiffonade of spinach and bits of pickled onion. At first sip, the soup was almost shockingly sour, but within moments the silken richness of the egg yolks rolled across our excited taste buds and made us yearn for the next spoonful. Adding a dollop of luxe were the three breaded and fried oysters that garnished the soup: crisp, succulent, and a perfect complement to the light, sweet-and-sour broth.

Next up was a savory "napoleon": layers of finely cubed red beets and apples, and crumbles of blue cheese, divided by thin "crackers" of baked pasta that had been brushed with essences of apple and blue cheese. The diminutive faux pastry, with its mouthwatering combination of salty-sweet flavors, was topped with a jumble of peppery organic beet greens and drizzled with both a heady infused chive oil and a flavorful beet vinaigrette that echoed the flavors of the main ingredients and had us surreptitiously running our fingertips across the plate to capture every last drop.

Part of the excitement of a tasting menu is not knowing what is coming next, and this evening's meal was no exception. Flavors and textures, so far intense but playful, began to build with the next course: a potato-and-lobster pierogi on a bed of buttery caramelized onions. The tubby little pierogi had been gently sautéed so that it was crisp and savory in some spots, and buttery and tender in others. A perfectly prepared, whole, shelled lobster claw -- a meltingly delicious garnish that helped intensify the flavor of the filling -- beautifully complemented it. The entire dish was set off by three fat drops of chive-oil-infused cr&eagraveme frâiche and came to the table on a black, rectangular Asian-inspired plate.

The momentum continued to build with the next course: the small, incredibly delectable rectangle of Crispy Sea Bass, topped with a tangle of pea sprouts and served on a large, yellow, triangular platter. While the moist interior of the fish was perfect, it was the ephemerally crisp, tissue-paper-thin pan-seared skin -- simply seasoned with salt and pepper -- that reduced my usually talkative party to a reverential silence. Of course, such a stunning piece of flesh requires an equally riveting accompaniment, and here it was found in the underpinning of lush chopped artichoke hearts and bottoms, and cardoons (a celery-like vegetable closely related to the globe artichoke) panned with a whisper of earthy truffle butter.

That whisper became a roar in a stellar combination of Braised Sweetbreads in a robust veal demi-glace, laced with sliced shiitake mushrooms and served over a neat little mound of truffled mashed potatoes. While calf sweetbreads -- long a staple of classic French cuisine -- give some diners pause, this dish should be an award winner. Meticulously cleaned and attentively prepared, the impeccably tender, bite-sized morsels burst with a sweet, mild flavor that carried just a vaguely exciting hint of their origins. Meanwhile, the truffled mashed potatoes sang an intense harmony to the meat and had us sighing in sotto voce to the rhythm that they played.

Had you been keeping count, as we were, you would have noted that we were now facing the sixth course of our extraordinary feast, and we were beginning to hit the wall. Service had been blessedly leisurely, giving us time to meditate on the tastes of each little morsel and cleanse our palates between courses with sips of water and bits of Lola's fragrant, yeasty breads. (In the aftermath of, variously, flu, pneumonia, and bronchitis, none of us were imbibing, although the large and comprehensive wine list of domestic and international reds and whites, in a wide range of prices, certainly held something to please every taste.)

Still, when our friendly server brought the next course, we caught our breath in delight. A big, juicy red bell pepper had been stuffed with luscious shredded lamb shank and tender black lentils, and topped with spoonfuls of creamy, slightly sour goat cheese, before being baked to tender-crisp perfection. Topped with micro arugula and drizzled with a bit of arugula oil and red-pepper coulis, the intense and reiterated flavors of the Middle Eastern-inspired dish filled our mouths like a final prayer.

Were we full by now? Of course, but beyond that, we were wonderfully satisfied. Other than the sweetbreads, which were sinfully rich, the petite portions relied on slight amounts of infused oils and heady vinaigrettes for their intensity, and had a delicacy about them that left us feeling energized rather than defeated. In fact, when our server announced dessert would be next, we neither groaned nor fussed. Rather, we dug into the four different sweets -- served on an embarrassingly large, free-form platter -- and, between us, managed to polish off every crumb.

The first to fall beneath the onslaught of our spoons was a hot, fudgy round of Molten Chocolate Cake topped with a scoop of silken coffee ice cream and gobs of hot fudge. Next, we turned our attention to a creamy but not-too-sweet portion of Banana-Mascarpone Cheesecake, topped with whipped cream and a crunchy tuille cookie. We made short work of a tangy lemon tart, in a dainty pastry shell, topped with sliced strawberries. And we wasted no time in polishing off a warm wedge of unbelievably light apple-studded bread pudding in a smooth whiskey hard sauce. It was a lighthearted way to end a meal that we agreed was one of the best we had ever eaten.

Our only quibble is a small one: We wish the lights had been brighter at our table, so that we could have better appreciated the appearance of each little piece of edible art as it arrived. Still, our noses and palates told us what our eyes could not, and our pleasure was attenuated only slightly by our inability to fully enjoy the shades and colors of our food.

As for our deception, it remained intact until the fifth course, when a gregarious Symon stopped by our table to see how his diners were enjoying their culinary adventure. Despite my efforts to fade into the shadows, and a new $90 hairstyle, he recognized me almost immediately.

But, of course, by then we had his number. And, in our book, it's nothing less than Number One.