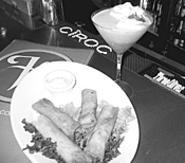 Ask Tricia Denison to pick her favorite Monday-night libation at Flo Café's Martini Madness, and she immediately singles out her chocolate concoction.

Among the couple dozen $5 drink specials, the Strawberry Shortcake -- strawberry Stoli mixed with Frangelico and pineapple juice -- has its fans. But it's the S'moretini that keeps Denison hopping behind the bar. "It's vodka topped with sprinkles of Godiva chocolate and mini-marshmallows in a glass rimmed with graham-cracker crumbs," says assistant manager Denison. "It's chocolate, and girls love it."

To soak up the alcohol, head chef Angel Samano is in the kitchen, changing his Coast to Coast dinner menu every month to reflect dishes from different parts of the world. In the past, he's whipped up regional delicacies from New England, the Louisiana bayou, and the Southwest. This month, it's Italian cuisine, featuring two specialties: an entrée of cavatelli Bolognese (ground veal, pork, and beef in a meat sauce) and bruschetta, an appetizer of tomatoes, onions, garlic, basil, and olive oil. "You've gotta put some mozzarella on a nice, crusty piece of bread," says Samano. "It's my little flair." Go mad from 8 p.m. to midnight at Flo Café, 1213 West Sixth Street. Admission is free; call 216-443-9080. -- Cris Glaser

Game On
Impress the opposite sex with all your useless info.

Pop-culture-spewing geeks aren't exactly known for their romantic dexterity, but they could have the last laugh on Wednesday, when Meet, Match, and Mingle hosts Singles Showdown, a hook-up event revolving around a game-show-style trivia contest. "The setting enables [players] to be in groups or on teams, kind of like an ice-breaker," says Shannon Jones, the company's director of client services. "It's easier to meet people, because they're not forced to talk to one another in a timed setting." Prizes go to the folks who know the most info about movies, music, and TV, but a bigger reward is also possible. "Even if you are not meeting your soul mate, it is an easy way to make new friends and start relationships," says Jones. Get ready to show off just how much useless stuff you know (and maybe get lucky) from 6 to 9 p.m. at the Treehouse, 820 College Avenue. Admission is $26; pre-registration is required at www.meetmingleandmatch.com. -- Katherine Fulton

Paul Mooney's writing credits read like a history of black comedy: Richard Pryor, Redd Foxx, In Living Color. But these days, the veteran stand-up is best known as a performer on Chappelle's Show. "If I hadn't been in comedy, it would be different," he says. "I freed people -- black and white -- to be themselves." That's a grand proclamation for a comedian, but Mooney's sociopolitical observations rank among the biz's sharpest (see Chappelle's race-baiting "Ask a Black Dude" segments). "There was no 'getting started'," he says. "I was born for this." Mooney's at the Improv (2000 Sycamore Street) 8 p.m. Thursday and Sunday, and 8 and 10:15 p.m. Friday and Saturday. Tickets are $16 and $18; call 216-696-4677. -- P.F. Wilson

To recoup $2,000 stolen from the club's safe last month, Cabaret Dada hosts Thief Relief, with stand-up comics, hors d'oeuvres, and an auction of dinner-and-theater packages. Even if the comedy club makes back the cash, it still stings to get robbed in broad daylight. "It was two o'clock in the afternoon," says the troupe's Russel Stich. "That takes some balls." Show time is 8 p.m. Friday and Saturday at Cabaret Dada, 1210 West Sixth Street. Tickets are $25; call 216-696-4242. -- Cris Glaser