Julius Caesar and Malcolm X merge in the fascinating but flawed Julius X. 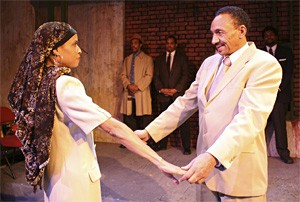 At first, superimposing one character upon another seems an unnecessary stunt to bring to the stage, gimmicky in a Freaky Friday sort of way. But when you combine Julius Caesar and Malcolm X, as Karamu does in its production of Julius X, you come away marveling at how the two fit together like a beautifully crafted dovetail joint.

Beyond the unique character of Julius X, this production has many compelling moments, as it blends spoken-word poetry, snatches of Shakespeare's words, and some gospel-inspired singing. But the talented cast frequently loses its grip on the challenging material, resorting to increased volume when increased attention to character nuances would have served the audience much better.

In crafting this story, playwright Al Letson Jr. captured the similarities between Julius and Malcolm: Both were galvanizing leaders, imbued with a gigantic sense of mission. But they also had equally sizable egos and a lust for power that eventually led to assassinations by cabals of their followers.

To capture those connections, Letson follows Shakespeare's storyline faithfully, but situates the characters in 1965 Harlem, a community in the midst of racial upheaval.

A large part of that unrest, of course, was ignited by the Nation of Islam — referred to simply as the Nation throughout this play. Leader Elijah Muhammad promoted "black power" and appointed lean and angry Malcolm X as the national spokesman for the organization, and Malcolm used his crisp, sharp-edged speaking style to enthrall black followers and terrify many whites. The black-suited, bow-tie-wearing members of the Nation of Islam seemed quite mainstream on the surface, but their rage was molten hot. "Be peaceful, be courteous, obey the law, respect everyone," Malcolm once said. "But if someone puts his hand on you, send him to the cemetery."

Departing from Shakespeare's script, Letson sends minister Julius X to Mecca and brings him back with a belief that Islam could transcend racial animosities. He admits that some whites might not be the devil incarnate. This new idea, combined with Malcolm's hunger for power, leads the Nation's leaders to put a contract on his life.

At this point, the two stories blend seamlessly, as Cassius 10X leads the plot and Brutus Muhammad agonizes over his decision. Meanwhile, Julius' wife, Calpurnia X, and Brutus' wife, Portia (Jasmine Yates), reflect the fear and torment of the times. Of course, you know how all that turns out.

The title role requires an actor who can speak with the hair-raising clarity and sense of purpose of Malcolm X. But Abdullah Bey can't quite fit his quirky, often-mumbling style to this task, so it's somewhat mystifying how his character could spark in his followers the emotional reactions that he does. Oddly, Saidah Mitchell as Calpurnia X is closer to the real Malcolm, with her smoldering presence and clipped enunciation.

Jonathan Wray is solid as the craven manipulator Cassius, plotting the demise of Julius with forbidding, hooded eyes. Jason Dixon's often-baffled Brutus touches on the complexity of this man, who supports the assassination for what he thinks is the good of Harlem. And Jason Walker gnashes his teeth in despair as Julius' primary cheerleader, Marc Antony.

While Wray, Dixon, and Walker all have scenes where they bring their roles to life, all three depend far too often on shouting. These extraneous decibels clutter the subtle threads of emotion that would clarify Cassius' skulduggery and Antony's despair, which turns into sly sarcasm in his iconic funeral speech. In the smaller role of Octavius, Kevin Holt contributes a simmering sense of dread.

Letson's script is an often intriguing mash-up of two legendary figures. But it's a shame more of Malcolm X's fire isn't captured onstage. After all, this was a man who once said, "If you're not ready to die for it, put the word 'freedom' out of your vocabulary." That's a passion that could be more present in this admirable but less-than-entirely-successful production.