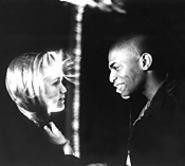 What is it that people get out of Shakespeare's plays? That's a relevant question, given the number of updates and reimaginings of his work that show up on an almost weekly basis, not to mention the faithful restagings. Is it the stories? The flowery dialogue? The author's ability to capture a time and place that is foreign to us, yet familiar via the emotions of the protagonists?

It probably isn't the stories. The fact is, Shakespeare often used preexisting stories. More likely, the timeless appeal of the plays (assuming there is such) comes from their eloquent dissections of such primal human emotions as love, jealousy, and vengeance. Even with such universal themes, however, there are often specifics that don't hold up in every context. Would the victimization of the Jews in The Merchant of Venice seem as relevant if set in contemporary Hollywood? Would the idea of a woman dressing up as a man be as wacky if set in Greenwich Village? Romeo and Juliet seems almost contemporary on the surface, but how many modern adaptations actually make the protagonists as young as Shakespeare did?

These are the sorts of problems director Tim Blake Nelson runs into with O, an update of Othello set in a contemporary boarding school. Shakespeare's language has been jettisoned in favor of contemporary speech, but his structure is slavishly followed -- perhaps too slavishly for Miramax, the film's original distributors, who kept this thing in limbo for two years; they reputedly asked Nelson to give it a happy ending (incidentally, if you don't know the story of Othello, there will be spoilers in this and other reviews; it might behoove you, at this juncture, to go and read the original).

Anyway, Othello is now named Odin (Mekhi Phifer), Iago is Hugo (Josh Hartnett), and Desdemona is Desi (Julia Stiles). Instead of Venetian soldiers, Odin and Hugo are basketball players at a South Carolina boarding school. Instead of serving the Duke of Venice, they serve a coach whose name is Duke, a.k.a. "The Duke" (Martin Sheen). Hugo is the son of the Duke and clearly unhappy that dear ol' Dad loudly and publicly proclaims that he loves Odin as he does his own son. This being South Carolina, you might think more people would be outwardly prejudiced about such statements, but all the racism in this film is repressed. Heck, at one point Desi wears a tank top with a little Confederate flag on it, and Odin makes absolutely zero comments.

No one has much of a problem with Desi and Odin's dating, although, as per Shakespeare, Desi's dad doesn't know that they are, until Hugo makes sure that he finds out. Trouble briefly ensues, but Odin is such a star athlete that all concerns are swiftly glossed over. From there, Hugo sets out an elaborate scheme to destroy Odin utterly, professing to be his good friend while sowing the seeds of distrust between "O" and another teammate, Michael Casio (Andrew Keegan), concerning the faithfulness of Desi. It all ends, as these things invariably do, in bloodshed.

The filmmakers would like to convince you that this movie is a timely comment on high school violence, as depicted by a prescient genius several centuries ago. Miramax, too, was so convinced that every time any school violence was reported on the news, they bumped the film's release back another six months or so. Nelson and company finally sued to get the rights back and, like Kevin Smith before them with Dogma, took their "controversy" to Lion's Gate.

The problem is that the story of Othello isn't at all relevant to the recent spate of school shootings, the most notable of which (think Dylan Klebold and Eric Harris) featured suicidal latchkey kids taking out their least favorite bullies (as well as anyone else in the vicinity) before snuffing themselves. Iago's elaborate revenge scheme works in the context of a 16th-century royal court, but makes little sense in the present day. Odin is revealed to be a cocaine user -- surely, exposing that practice would be sufficient to disgrace him in Duke's eyes. Why Hugo feels the need to plot the murders of both Desi and Michael is simply unclear. In Othello, given its wartime setting, all the characters are in a killing mode to begin with. But despite what some rabid fans may tell you, basketball is not war. And given today's inane "zero tolerance" school rules, ruining the career and/or life of any student prone to violence and drug use would be far easier than a Machiavellian courtly strategy from Shakespeare's day.

Yes, jealousy over a woman can make a man homicidal, no question. Sure, racism can play a part, if the relationship is a mixed one. Take that premise and set it in high school, and it could perhaps work -- with a little less reverence for classical structure and a little more awareness of the times we live in. It doesn't help matters that Iago/Hugo has very little motivation to do what he does; Shakespeare made him basically evil, while Nelson and screenwriter Brad Kaaya try to deepen his darkness with an absent-father theme. But then there's some nonsense about people being compared to hawks and doves, along with plenty of images of the latter; perhaps Nelson and Kaaya watched an all-night John Woo marathon right before shooting started.

Hartnett's Hugo does get the best sorta-Shakespearean dialogue, adapting "Demand me nothing: What you know, you know. From this time forth I never will speak word" to "You don't ask me nothin'; I did what I did, and that's all you need to know." Phifer is less lucky, stranded with lines like "They don't know who they fuckin' wit'" and "I can say 'nigger,' cuz I am a nigger. You can't, cuz you ain't." (Glad we cleared that one up.)

All the acting is strong, however -- the film's biggest strength. Hartnett and Phifer can shine in virtually anything (see the former in Pearl Harbor and the latter in Uninvited Guest), but it takes talent to wrench a good performance from Julia Stiles, and Nelson does it, finally freeing her from the facial paralysis that seemed to set in shortly after 10 Things I Hate About You (and continued through Down to You, Save the Last Dance, State and Main, et al.). She's still a little inhibited with the love scenes (if sexiness is what you seek, go rent the Irene Jacob and Laurence Fishburne Othello instead), but give her time.

It's too bad the rest of the directing doesn't measure up. Nelson has a weird fascination with shooting scenes through open doors -- a device that might seem clever once, but swiftly becomes tiresome. The film generally looks like a TV special, with low production values and lots of close-ups (perhaps they blew too much of the budget on those damn doves). And while cutesy references to the source material may work in comedic updates like 10 Things I Hate About You, this would-be tragedy could do without an opera score from Verdi's Otello and a classroom scene in which Hugo, asked to name one of Shakespeare's poems, responds, "I thought he wrote movies." If you're a teen who's never heard the story of Othello before, O might be something you should see. If not, you already know better.