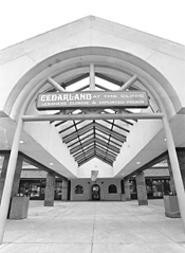 Oh sure, Cleveland has a number of chefs whose skills have been put to a royal test. Michael Symon, for example, has fired up the Lola grill for top-rated chef Thomas Keller, of Napa Valley's French Laundry. Marlin Kaplan, from One Walnut, just got back from creating a Wine Lover's Christmas for discriminating palates at the Beard House in New York. And the Sokolowski brothers, at University Inn, once played host to Bill Clinton -- not a gourmet exactly, but certainly one of this country's most notable appetites.

But Serge Elias, owner of Cedarland at the Clinic, can top them all: He's cooked for a sheik. And for the sheik's 362-member entourage. Breakfast, lunch, and dinner. For 18 weeks.

Elias, a U.S.-trained businessman who also owns a restaurant in Lakewood, honed his cooking chops during more than four years at Nate's Deli in Ohio City before being chosen to serve as chef to Sheik Zayed bin Sultan Al Nahyan of the United Arab Emirates during the 81-year-old sheik's August 2000 kidney transplant at the Cleveland Clinic. Elias had come to the attention of the sheik's people during their earlier visits to Cleveland, when he was in charge of creating traditional Middle Eastern dishes for clinic visitors in the kitchen of the former Omni Hotel. "They called a month and a half in advance," says Elias, "and they reserved the entire restaurant [formerly Palmyra, in the Guesthouse Plaza] for four and a half months."

So what does the world's sixth-richest man like to eat? "Tabouli, mostly," says Elias, referring to the traditional cold dish of bulgur wheat and finely chopped parsley, tossed with mint, lemon juice, and olive oil. Of course, the elderly leader didn't leave his hospital bed to dine; Elias sent the food across the street. But the rest of the entourage, including the sheik's sons, apparently engaged in a sort of 'round-the-clock feeding frenzy in the neat little restaurant. "Oh, they ate everything," Elias says, still contemplating those days with a hint of weariness. "Lamb, stuffed and unstuffed. Fish -- whole and filets -- baked and roasted. And salads. Lots of salads."

All of which gives Elias and his wife and cooking partner, Lilian, a legitimate claim to a certain degree of culinary fame. Yet they prefer to let their food -- all made from scratch, without preservatives, additives, or contact with cans or freezer wrap -- speak for itself.

And so it does, with eloquence. Elias tweaks many of the standard recipes just enough to keep them interesting. A superlative hummus, for instance, has the dreamy texture of freshly whipped butter but is redolent, not so much of garlic or lemon, as with essence of sesame; meanwhile, on top, the typical sprinkle of red powder is not the usual tangy sumac but an in-your-face dusting of red cayenne. Thick lentil soup, with potato and spinach, is enlivened with the flavors of cumin, coriander, fresh garlic, and an abundance of fresh lemon juice. The homemade dressing on a tidy salad of lettuce, tomato, red onion, green pepper, and parsley is a deliciously smooth and sweet blend of balsamic vinegar, olive oil, fresh garlic, sumac, and sun-dried tomato. And Elias has even created a few new dishes, which he says are found exclusively at the Cedarland: arayiss, or spiced ground meat stuffed inside a toasted pita, and halabi, ground beef, spices, and pine nuts, served on a bed of rice.

Behind its American flag and intricately carved front door, the Cedarland itself is small, scrupulously clean, and more artfully decorated than many of its peers. A handful of tables, with tops of meticulously inlaid wood and mother-of-pearl intarsia, march down the middle of the narrow room; booths, upholstered in peach-colored vinyl, are lined up against each wall. Tall white columns, with painted crowns of green acanthus leaves, demarcate a corner that serves as an imported foods market, with a stock of rosewater and fig jam from Beirut, stuffed grape leaves from Greece, and sardines from Morocco. White stone floors abut walls painted to resemble a desert of pink sand, where ancient Mediterranean ruins dot the landscape and tall purple mountains fade off into the distance. And while the lighting, from fluorescent ceiling fixtures, is a trifle gloomy, the service is often casual to a fault, and the requisite television set is tuned to CNN's coverage of the war in Afghanistan, the overall ambiance somehow manages to be comfortable and relaxed.

Cedarland is billed as an American and Lebanese restaurant, and sure enough, amid the foule, the fatoush, and the spinach pies, the menu lists french fries, onion rings, and chicken tenders. The restaurant also serves a limited breakfast menu until 11 a.m., with scrambled eggs, omelets, oatmeal, toast, and jelly.

However, we confined our gustatory ramblings to the more traditional Middle Eastern dishes. Among the highlights, the sheik's favored tabouli turned out to be fresh and lemony, with plenty of chopped parsley and a slight saltiness. Baba ghanoush -- baked eggplant puree mixed with tahini, garlic, and lemon juice, and topped with olive oil and parsley -- lacked the usual smokiness, but offered a refreshing sweetness in return.

Baked kibbe (dark, moist patties made from ground lamb, bulgur, chopped onions, and pine nuts) came to the table on a bed of vermicelli-and-veggie-spiked rice, with a side of snowy yogurt. Shwarma -- slender strips of lean beef, with chopped onion, tomato, and parsley, in a creamy tahini sauce, loaded into an enormous loaf of yielding pita bread -- burst with goodness; meat-and-rice-stuffed grape leaves, piqued with allspice and black pepper, and arranged like the spokes of a wheel on a bed of greens, were tender and fragrant. And although we thought staffers were a little stingy with the cubes of meat they threaded onto skewers for our smoky lamb kebabs, we could find no fault with the dish's flavor.

In fact, the kitchen's only frank misstep came with a serving of falafel, all nice and brown outside, but runny and undercooked within. Even on a second try, with the exterior now nearly fried to a fare-thee-well, the innards remained damp, soggy, and pretty much inedible. And while we're grousing, we admit we were disappointed to find that Lipton, rather than some exotic minted brew, is the house's tea of choice.

Nonetheless, our meals ended sweetly, with a selection of crunchy honey-and-rosewater-scented baklava, in almond, walnut, and pistachio-filled varieties, along with sweet, macaroon-like confections of coconut and farina, called namoura. We sipped the last of our Lipton, feeling particularly satisfied. And why not? We seldom get treated like a queen, but sometimes it's enough just to eat like a sheik.